‘It certainly woke us up’: Surfers compensated for unequal prize money following backlash

The champion of a premier Sydney longboard surf competition who called out the inequality of prize money compared to her male counterpart will be paid the difference after a public backlash.

Lucy Small made waves this week for pointing out the pay difference while accepting her first place award at the Curly Maljam on the northern beaches on Saturday. 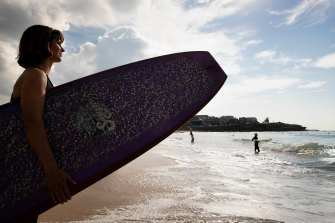 Lucy Small won a longboard surf competition at North Curl Curl over the weekend but received less than half the prize money of the men’s winner.Credit:Janie Barrett

“Thank you to the sponsors for the money they’ve put into the event, but I would say it’s a bittersweet victory knowing that our surfing is worth half of the men’s prize money,” she said.

“It took the same amount to drive here, flights were the same cost to fly here, accommodation cost the same and our surfing is worth half [as] much. So maybe we can think about that for next time.”

On Friday, surfboard distribution company Global Surf Industries said they would be making a donation to make up the difference after seeing the Herald’s story on the competition. The organisers of the event, the Curl Curl Longboarders Club, accepted the donation.

Club secretary Phil Nicol said the club was happy the inequality in prize money could be rectified with the help of GSI.

“It certainly woke us up,” Mr Nicol said about the media coverage.

“You get stuck in your ways and that’s all it was…there was probably a bit of mental laziness in there as well so there is a whole lot of moving parts in this one.”

GSI chief executive Mark Kelly said he had transferred $4,850 to the organisers to make up the differences in the prize money for the top four female competitors.

“I did this for two reasons,” Mr Kelly said.

“Firstly, it was a very brave move by Sally to speak up and two, it was great to see the club own the issue and say that they would change from next year. I thought that was great, but this year’s winners missed out. So I thought we would help rectify the situation.”

Small, who had to turn off her phone on Friday morning due to the level of media interest the story generated, said while the donation was appreciated, she hoped change would follow.

“I hope this is putting people on notice and showing people you can’t just do this and get away with it,” she said.

“I look forward to that happening as we go along. It is a positive step and I am glad a positive thing has come out of this.”

Small said the response had been overwhelmingly positive, with many female surfers and spectators thanking her for speaking out about the issue in recent days.

“The surf industry has a long way to go and there is still a lot we need to do in terms of mainstream gender consideration.”