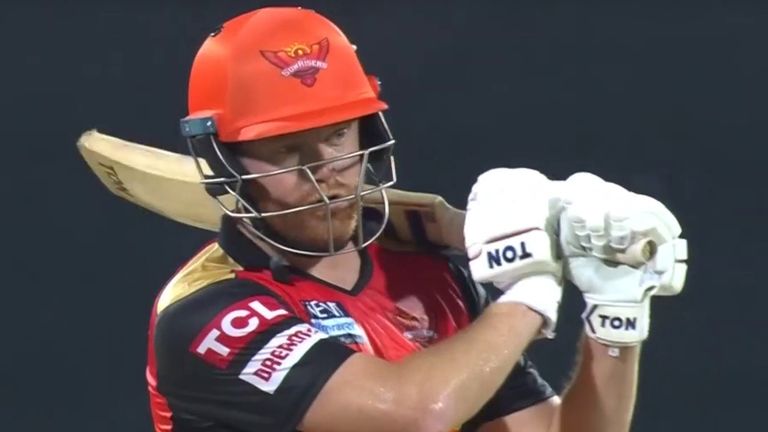 Sunrisers Hyderabad finally got off the mark in the 2021 Indian Premier League, at the fourth time of asking, as they earned an emphatic nine-wicket win over Punjab Kings to leapfrog their opponents at the foot of the table.

Having bowled out Kings for 120 on a helpful, slow Chennai surface, Sunrisers then chased down their target with just over an over to spare, Jonny Bairstow contributing an unbeaten 63 from 56 balls.

Having lost all three of their opening games in the tournament, it was about as convincing a way for Sunrisers to kick-start their campaign, especially considering Kings won the toss and elected to make first use of the pitch.

But captain KL Rahul (4) fell early on, cheaply chipping a Bhuvneshwar Kumar (1-16) delivery to midwicket, and Mayank Agarwal (22) and Nicholas Pooran (0) departed to consecutive deliveries – the latter run out without facing after a mix-up with Chris Gayle.

Rashid strikes in his first over, claiming the big wicket of Gayle for 15 – Punjab in big trouble at 47-4 in the 9th over.#PBKSvSRH #VIVOIPL #IPL2021

Deepak Hooda (13), Moises Henriques (14) and, most notably, Shahrukh Khan (22) – who struck the two lone sixes of the innings in finishing as joint top-scorer – tried their best to rally but wickets continued to tumble with regularity.

Abhishek Sharma (2-24) and Khaleel Ahmed (3-21) combined to do the bulk of the damage with the ball at the back end, while Siddarth Kaul (1-27) picked up Murugan Ashwin (9) in the final over and Mohammed Shami (3) was then run out to end the innings two balls shy of their allotted 20 overs.

The Sunrisers run-chase was really nothing more than a procession, with Bairstow and David Warner (37 off 37) cruising to a half century opening stand inside six overs – the England man the more aggressive early on, heaving two sixes into the stands.

Sunrisers are making light work of this run-chase, though Warner falls for 37 shortly after striking this maximum – 73-1 (11ov), chasing 121.#PBKSvSRH #VIVOIPL #IPL2021

Beyond the powerplay, the pair consolidated, content to just rotate the strike with the required rate less than a run-a-ball. Warner briefly broke the shackles to swat Hooda for six over deep extra cover, but he was then gone in the next over, holing out at deep midwicket off Fabien Allen (1-22).

Kane Williamson (16no) came in and calmly picked up where his captain left off, while Bairstow brought up his slowest T20 half century, off 48 balls, with his third boundary, while he struck a third maximum of his innings as Sunrisers clinched victory in the penultimate over.