CHRIS WEIDMAN called Conor McGregor a 'dirtbag' and said comparing their leg breaks in a meme was the 'lowest of the low'.

UFC legend Anderson Silva suffered a horrific broken leg in his 2013 rematch with Weidman, which took two years to recover from. 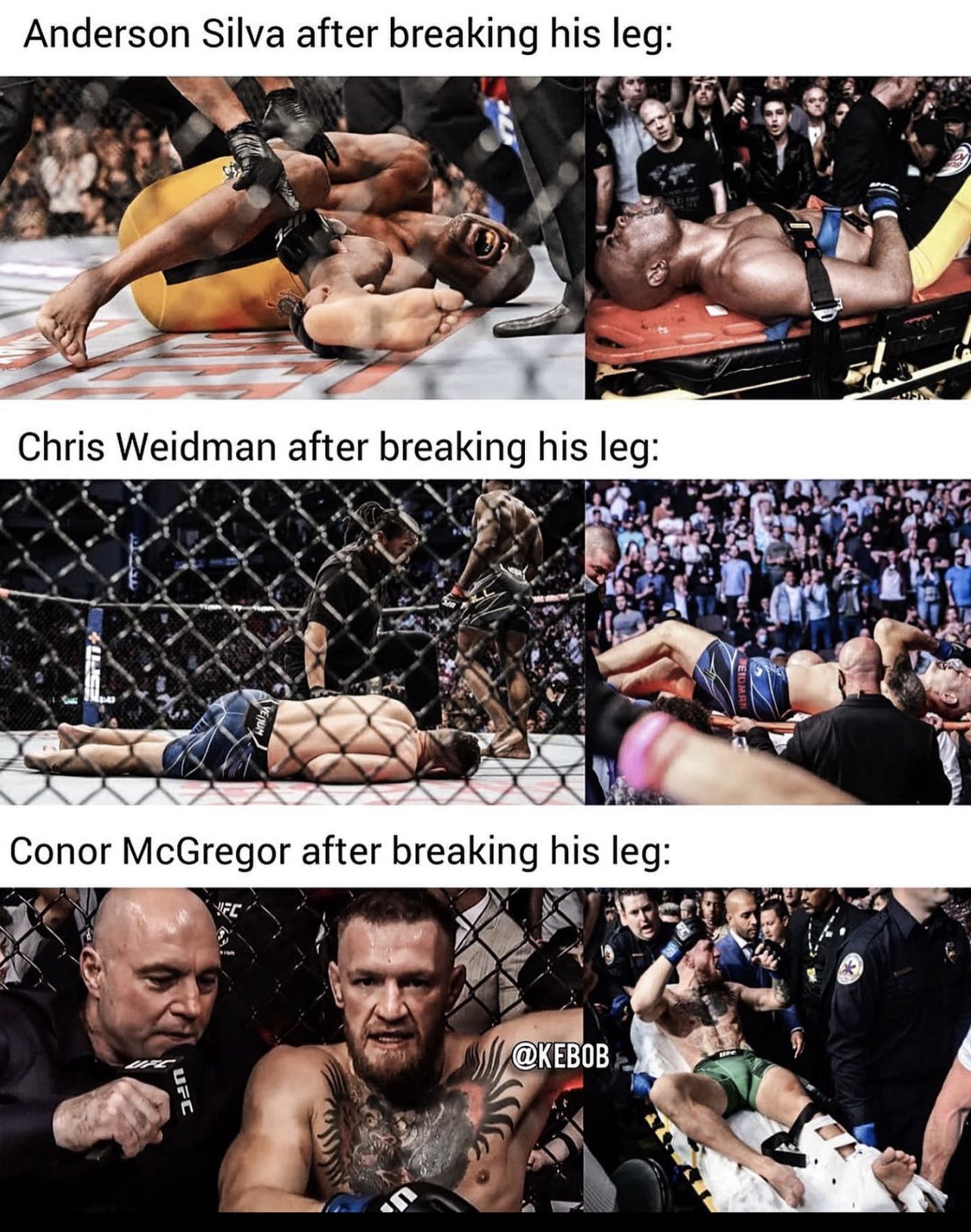 Coincidentally, in April American Weidman, 37, suffered a similar injury against Uriah Hall, also 37, and is continuing to recover.

Just three months later, McGregor, 33, broke his tibia seconds before the end of round one in his trilogy bout with Dustin Poirier, 32.

The Irishman shared a meme on Twitter, which shows Silva, 46, and Weidman distressed after their respective leg breaks and being stretchered out of the stadiums.

But McGregor cuts a more venomous look and has his hands up gesturing to the crowd as he was carried out.

ButWeidman hit out at the former two-weight UFC champion for the post, which he said was a 'slap in the face' to himself and Silva.

He said on podcast Won't Back Down: “He just put up some meme thing, I guess, you know.

"His leg’s broken. He’s talking to Joe Rogan. And he writes something like, ‘It’s not about what happens to you in life.

"It’s about how you deal with it moving forward.’

"And it’s kind of like a slap in the face to me and Anderson Silva, like he handled pain and adversity in that moment better than we did.”

Before McGregor's doctor stoppage loss to Poirier, 32, he insulted the American's wife, claiming she had been privately messaging him.

He has gone as low as you could possibly go – When it comes to dirtbag status, just the lowest of the low.

And while recovering from his setback, Italian DJ Francesco Facchinetti alleged the UFC fighter punched him in the face.

Following other digs at Khabib Nurmagomedov, 33, before and after McGregor's 2018 loss to the Russian, Weidman slammed the lightweight contender.

He said: "You’ve got people who look up to you. How do you explain this to your kids?

"The way you acted, you know, punching this old guy in the face, then the DJ; it doesn’t stop. ‘Oh, I’m sorry to this guy. Then I’m sorry to that guy'.

“You know, then I’m saying this about Khabib’s dad and Khabib’s mum and then this about Poirier’s wife.’

"He has gone as low as you could possibly go – when it comes to dirtbag status, just the lowest of the low.”