Four-time world heavyweight boxing champion and Atlanta native Evander Holyfield was on hand in the city Friday for the unveiling of his larger-than-life statue outside State Farm Arena.

Holyfield, 58, was born in Alabama but his family moved to Georgia when he was a kid and he soon started boxing at the Atlanta Boys Club, according to the Atlanta Journal-Constitution.

“I’m honored to be here today and I thank all the people in my life that gave me this,” Holyfield said while standing next to his 10-foot tall, 2,500-pound bronze likeness before posing for photos. “If you don’t quit, you’ll get there. I’m the person who just didn’t quit. Mistakes? I made a lot of ‘em. But I didn’t quit.” 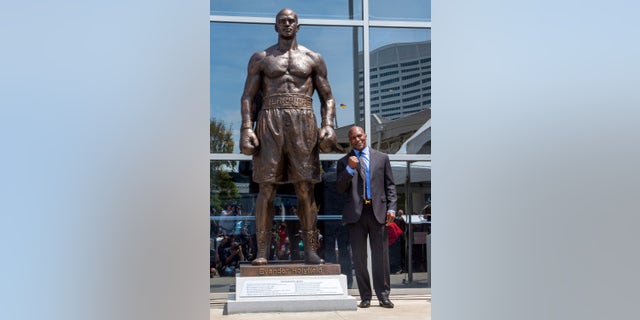 Legendary boxer Evander Holyfield stands next to a bronze statue of himself that was unveiled outside the State Farm Arena, Friday, June 25, 2021, in Atlanta. (Associated Press)

But he didn’t dismiss the idea outright, teasing, “We’ll see what happens.”

The bronze statue was sculpted four years ago but then sat in storage collecting dust for two years while the city searched for a home for it.

Sculptor Brian Hanlon — who also did the statue of Atlanta Hawks star Dominique Wilkins on the arena’s south plaza — was commissioned in 2017 and finished in 2019.

“It didn’t take the sculptor but about six months, but since that time it’s been looking for a home,” Fulton County Commission Chairman Robb Pitts said. “In a lot of cases … there was opposition from citizens who felt that tourists would be coming at all times of day (and) the commotion would disrupt their quality of life.”

Finally, Atlanta Hawks CEO Steve Koonin and State Farm Arena, the site of the former Omni where the “Real Deal” first became a world champion over Dwight Muhammad Qawi in 1986, offered a spot. 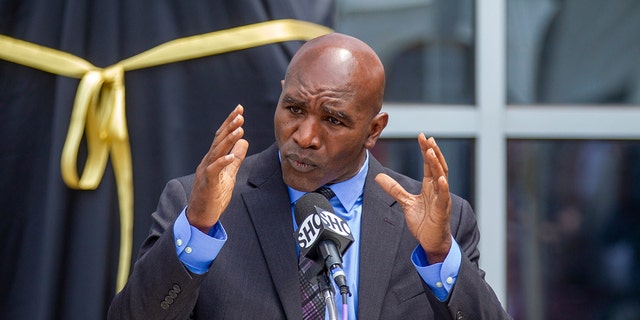 Legendary boxer Evander Holyfield before the unveiling of a bronze statue of him outside the State Farm Arena, Friday, June 25, 2021, in Atlanta. (Associated Press)

Holyfield won bronze in the 1984 Summer Olympics in Los Angeles and then his first 28 pro fights as a cruiserweight and heavyweight on the way to a record of 44-10-1.

Holyfield said he wasn’t sure he liked boxing at first, but as the youngest of nine children, he noticed he got special attention from his mom when he brought home trophies, the Journal-Constitution reported.

“I found out when I brought that first trophy home … when everybody come in the house, they’d look at that trophy, and say, ‘Ms. (Annie) Holyfield, who is the boxer?’ She’d smile and say, ‘That little one right there.’ They’d say, ‘He little,’ but my momma say, ‘He can fight, though.’”