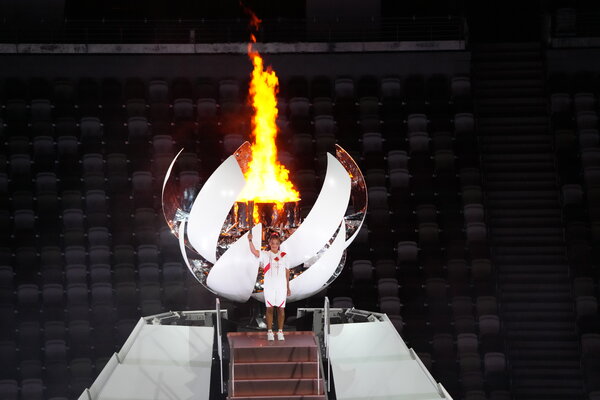 Following in the footsteps of Muhammad Ali, Paavo Nurmi, Rafer Johnson, Midori Ito, Yuna Kim and Wayne Gretzky, Osaka climbed a stylized Mount Fuji in the form of a pyramid to light the cauldron on top.

As always, it was the symbolic beginning of two weeks of competition, this year in the oddest possible circumstances with empty stadiums because of a global pandemic.

Osaka, one of the best tennis players in the world, climbed up a long set of stairs with the Olympic torch in her hand to light the cauldron, which sat inside a blooming flower.

Her mother is Japanese and her father is Haitian, and Osaka is wildly popular in Japan, but also around the world. She skipped Wimbledon to spend time with friends and family before taking center stage at the Summer Games, where there will be immense pressure for her to win a gold medal for her country.

Osaka, through her stardom, represents many things at once during this Olympic cycle. She is one of many mixed-race athletes in Japan who are challenging long held notions about race in the country. At 23, she represents a new generation of athlete and celebrity whose voice has emerged in the past year on several social issues, including race, both in Japan and the United States and beyond.

Her appearance at the ceremony prompted a move of her opening round match in the women’s singles tournament against Zheng Saisai of China. The match was originally scheduled for Saturday morning but moved to Sunday.