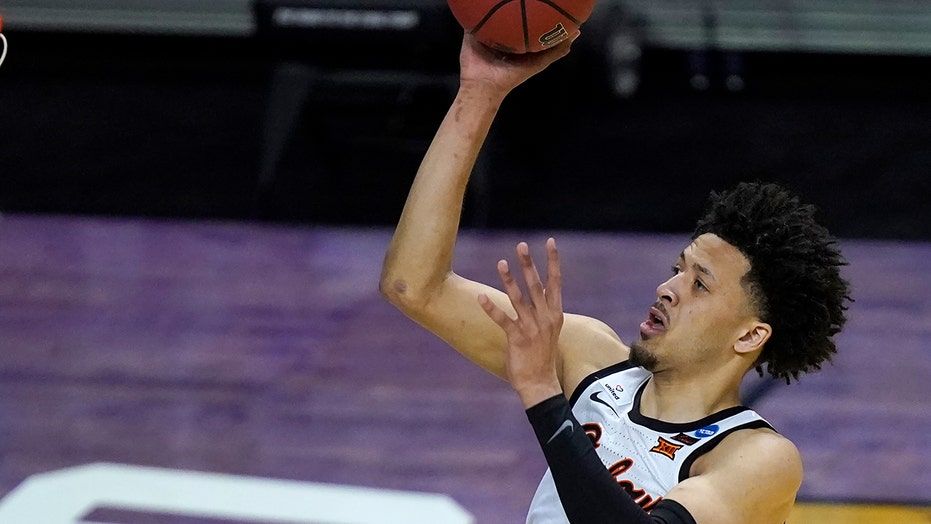 Cade Cunningham vowed to lead Oklahoma State to a strong run through the NCAA Tournament. The freshman All-American didn’t have an explosive debut, but did just enough to lead the Cowboys to a 69-60 victory over Liberty on Friday night in a Midwest Region first-round game.

Cunningham scored 15 points — nine straight in the final minutes — to lead No. 4 seed Oklahoma State to its first NCAA Tournament win since 2009. Avery Anderson III led the Cowboys with 21 points.

Cunningham before the tournament began said he planned to emulate Carmelo Anthony, who in 2003 led Syracuse to the national title as a freshman. But the Big 12 Conference player of the year struggled for most his debut until his late surge gave OSU (21-8) breathing room against the stubborn Flames (23-6).

He missed his first five shots and finished just 3 of 15 shooting, including 2 of 8 from long range. But both 3s were timely and he converted 7 of 9 free throws, contributions sorely needed with Liberty capable of quickly answering with a quick spurt.

Cunningham was not available for postgame interviews, but Anderson saw him steadily find his rhythm.

“Cade’s shots were falling in the first half, but he saw throughout the game that they would start falling,” he said, “and that was big time.”

Anderson picked up the offensive slack for Oklahoma State and scored 14 points in the first half. He shot 8 of 14, including a three-point play with 10:25 remaining for a 50-44 lead, and grabbed seven rebounds.

“I don’t really worry about Cade,” OSU coach Mike Boynton said of his star guard. “I think everybody else worries about him a lot more than I do. First of all, I’ve known the kid since he was 14. I know how he’s wired and I know that he wants to play to win.

“And if that means he’s got to score 10 points and get other guys involved and allow other guys like Avery Anderson or Matthew-Alexander (Moncrieffe) to kind of carry the load offensively, he’s comfortable with that.”

Elijah Cuffee had 16 points and Darius McGhee 12 for Atlantic Sun champion Liberty, which had won its previous 12 games. Liberty was seeking another NCAA upset two years after bouncing Mississippi State in the first round.

Normally one of the nation’s more sure-handed teams, the Flames committed a season-high 18 turnovers and were edged on the glass 37-36. OSU scored 18 points off those mistakes, while the rebounds loomed large in swinging toward the Cowboys.

“The game was extremely physical, and you can just look at those two stats, the turnovers and how many free throw attempts they had,” Liberty coach Ritchie McKay said. “They really just put their head down, they drove it and they initiated to where they were the aggressor and we obviously got in foul trouble.”

Both teams’ fan bases provided loud support in 6,800-seat Indiana Farmers Coliseum, home to IUPUI of the Horizon League and the Indy Fuel ECHL team. Liberty’s socially-distanced fans cheered the Eagles from the eastern end of the 82-year-old arena, where capacity was held at 1,200 because of COVID-19 restrictions.

Not to be outdone, several hundred fans on the west end tried to provide energy for the Cowboys. It worked as OSU finished much better than it played for many stretches.

Liberty didn’t buckle to the taller Cowboys or 6-foot-8 Cunningham and earned its share of 50/50 balls. McGhee’s long-range shooting gave teammates the confidence to contribute and keep Oklahoma State honest defensively. But Liberty went cold several times in the second half.

Oklahoma State’s play was uneven for much of the night, but the Cowboys adapted and were able to create opportunities in the second half. They shot just 40% but held Liberty to 36% shooting after halftime, and that made a difference.