Pandemic Victories for College Sports Have All Come With Caveats

As confetti fluttered to the feet of Mac Jones, the quarterback who arrived at Alabama with such a low profile that he was able to coach a sorority flag football team with barely a ripple of fanfare, he marveled at the journey that led him to the top of a winner’s podium.

“Can you believe this?” he told his coach, Nick Saban. “From scout team quarterback to winning a national championship?”

There were inspirational stories all around on Monday night. DeVonta Smith, the skinny kid from rural Louisiana, showed a national audience (again) why he won the Heisman Trophy. On the other side, Ohio State’s Haskell Garrett anchored the defensive line less than five months after being shot in the face while trying to break up a couple’s argument.

Still, as is so often the case, it is difficult to untangle the hypocrisy from the heartwarming in the mega-business of college sports, where the coronavirus pandemic has exacerbated the inherent conflicts wrought by a financial model that reaps billions on the backs of unpaid players.

If this often means pulling at distant threads over time — a Pac-12 player protest about virus protocols out west, a $92 million stadium renovation down south at Alabama, and debates about athletes’ rights on Capitol Hill — the dissonance was laid bare in a lone news cycle on Monday.

Hours before Alabama’s emphatic 52-24 victory, the South Florida stadium that hosted the game shut down its drive-through vaccine so it would not interfere with football. And hours before Saban cashed in a $200,000 bonus for winning the title, pushing his earnings this season above $10 million, an N.C.A.A. executive board punted its vote on rule changes that would allow college athletes — like Jones — to cash in on their fame with individual endorsements.

That inequity was highlighted much of the night as Alabama receiver Jaylen Waddle limped around the field on a surgically repaired ankle, a sight that left broadcasters praising his toughness while N.F.L. players, including the Kansas City Chiefs star Patrick Mahomes, chided Saban on social media for jeopardizing his player’s professional career.

As coaches, administrators and broadcasters congratulated themselves for persevering to the finish line of a season that yielded more than 150 canceled or postponed games and thousands of positive cases, the rhetoric — Saban on Tuesday morning used the unfortunate term “adapt or die” — carried no mention that much of the adversity for college sports has been self-inflicted.

Nor would there be any acknowledgment of another consequence of conducting a season during a pandemic, one that played out far from the South Beach Ritz-Carlton, where the College Football Playoff executives were lodged.

In Tuscaloosa, Ala., thousands of fans, ignoring pleas from the mayor and the sheriff, packed into bars and afterward poured onto University Boulevard, increasing chances that an area where nearly a third of the police force was unavailable because of the virus would confront a deeper problem as classes start Wednesday. A similar scene was avoided in Columbus, Ohio, for two reasons: The governor resisted lifting an order that bars close by 10 p.m. and the Buckeyes were trounced. 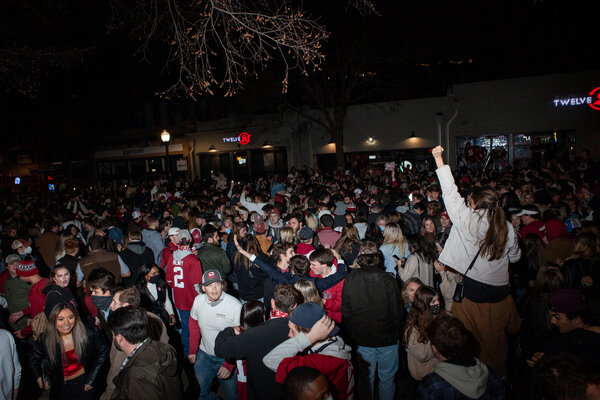 Kathleen Bachynski, an assistant professor of public health at Muhlenberg College in Allentown, Pa., said the scenes in Tuscaloosa, which echoed those of Notre Dame students’ storming the field after beating Clemson in November, were predictable.

“The message college football has been sending is that, in a sense, things are back to normal,” she said. “If you have games, that means people traditionally celebrate in big crowds. It’s a classic example of action speaking louder than words.”

Last summer, as university presidents mulled whether to proceed with football seasons, health and safety concerns centered on the players, leading to ramped-up testing, extensive distancing rules and efforts to assess the consequences of elite athletes’ contracting the virus — including myocarditis, a potentially fatal heart condition. The experiences of the season appear to have allayed fears that the virus would be easily transmitted through playing the sport.

However, the more than 6,600 cases that have been reported in college athletic departments also show that, for all the measures taken, bringing people together almost inevitably leads to the spread of the virus.

A recent study about college campuses in general, by the Centers for Disease Control and Prevention, seems to confirm that. Counties with large universities that returned at the start of the school year with remote learning ultimately experienced a nearly 20 percent decline in cases over a six-week span. Those with large schools that returned to in-person instruction saw a more than 50 percent spike.

“It’s pretty compelling evidence that gathering people from all over the country in small spaces is going to have an impact,” Bachynski said. “It’s not just the game itself.”

Next up is basketball season.

There, the disruptions have been just as persistent as they have been in football, with hundreds of games having been canceled or postponed and programs regularly halting their activities after positive tests. The Villanova men’s team paused last week for the third time since it began practicing, postponing three games after two players tested positive. The team was just getting back its coach, Jay Wright, who tested positive the day after Christmas.

“That’s just the state of the world right now, and we all understand that,” N.C.A.A. President Mark Emmert said in an interview on Saturday night.

“When I see games get canceled because somebody is exercising caution, that’s not a bad thing; that’s a good thing,” he added. “I don’t see a game getting canceled or rescheduled as a failure. I see it as somebody doing the right thing and saying, ‘Nope. You know what? Too risky. You’ve got a case. Let’s just stop for a minute, let’s deal with that and then move on.’”

The goal is to move on until March, when the cash-cow N.C.A.A. tournaments will be played — not in various far-flung cities as usual, but in one locale each: Indianapolis for the men and possibly San Antonio for the women. Survive and advance it is, then.

At the end, a winner will be crowned and confetti will rain as it did on Monday night, along with the inevitable questions.