Home » Sport » Ripe for the picking: When will clubs bid on excitement machine Alwyn Davey jnr?

Ripe for the picking: When will clubs bid on excitement machine Alwyn Davey jnr?

Following an eye-catching 19-touch, two-goal performance, two club recruiters said they expect a bid for the midfield-forward to come in the 20s in what is said to be a shallow pool of talent in this year’s national draft. 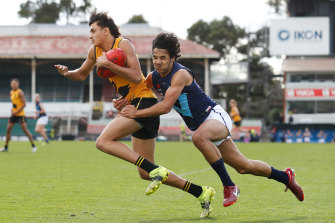 Alwyn Davey jnr could don the red and black sooner rather than later if Essendon match an early bid.Credit:AFL Photos

Luckily for Essendon, Davey jnr’s father, Alwyn Davey, played exactly 100 games for the Bombers – the minimum number of games required for sons of guns to be eligible as father-son priority picks.

Davey snr had twin boys, Alwyn jnr and Jayden. The latter has also impressed throughout his junior career, and was more highly rated by some recruiters, but has undergone a second knee reconstruction, which ruled him out for the year.

Davey jnr’s speed, agility and creativity around goal could propel him into the top 20 to 30, according to industry insiders, with other clubs potentially placing bids in the first round and Essendon matching thereafter.

Kevin Sheehan, the AFL’s national talent and international manager, said the Bombers were certain to push for the young gun in the 2022 draft, but how far they would need to go to secure the promising young talent was not set in stone.

“Alwyn’s twins were about eight or nine when they there were kicking the footy around the [Essendon] clubrooms. So, it’s a pretty wise decision to follow the legacy.”

“That’s the judgment call now on young Davey – as to whether there is a limit on how far they [Essendon] would go,” Sheehan said. “They’ll privately come up with the position on that as we get closer to the draft in November this year.

“Some clubs will put a limit on when the bid comes as to whether they would match the bid. Others won’t.”

The 18 year-old’s coach, former Geelong VFL and Port Adelaide AFL player Jason Davenport, said Essendon would surely face competition for the rising Northern Territory star as he continued to impress in the midfield and beyond.

“The Bombers invested in both Alwyn and Jayden through their academy at Essendon, and they’ve obviously worked with them over a number of different years. With his [Alwyn’s] performances now, what that does is it increases his potential draft stock,” Davenport said.

The Vic Metro coach said Davey jnr had attracted the attention of multiple clubs, noting the pressure on the Bombers to decide whether to match other clubs’ bids to secure the dynamic father-son duo in the early rounds.

“Other clubs are definitely interested in Alwyn, but also understand that the balance has got to be right with regards to Essendon having the opportunity to match, and that’s where the strategy of the draft comes into play,” Davenport said.

For Sheehan, Essendon’s consideration of Davey jnr was written in the stars.

“Alwyn’s twins were about eight or nine when they there were kicking the footy around the [Essendon] clubrooms. So, it’s a pretty wise decision to follow the legacy,” he said.

“We are now in for a chance to get one, and possibly two, outstanding prospects through the father-son rule … It’s a reward for loyalty.” 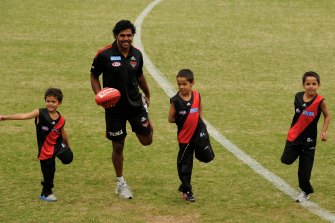 Essendon’s Alwyn Davey exercises with his children Alijah, Jayden, and Alwyn jnr back in 2012.Credit:Sebastian Costanzo

The draft hopeful has had a stellar year, shining for Vic Metro in the under-18 national championships and selected for the highly coveted AFL Academy program in May.

Davenport praised Davey jnr for his performance both on and off the field, highlighting his selfless nature and versatility as reasons why the rising star was undoubtedly headed towards the AFL’s bright lights.

“Alwyn has a great balance in his game and he showcases some pretty electrifying tricks with the ball in-hand,” Davenport said.

“His ability to run an offence is obviously the thing that stands out on-screen, but we’ve really loved what he’s doing defensively for us as well – from a pressure standpoint and a transition standpoint.

“That’s something, no doubt [for] Essendon fans, if he lands in their lap, that’d be really exciting to watch for years to come.”

While many predict Davey jnr will assume his father’s former position as small forward in the AFL, Sheehan is certain young Alwyn was flexible enough to stretch his talents across the field.

“What he’s capable of is getting through the midfield, which is an added string to his bow. He’s not just a small forward with the nimbleness of his father, but he’s capable of being the modern-day guy that can play both roles.

“He has exceptional awareness and that ability to, as we call it, just sidestep it, and when there’s no space, he finds space. I suppose it’s one of the traits of a very good Indigenous player. They’re light on their feet, and able to just slip through with their speed and find that space to deliver the ball.” 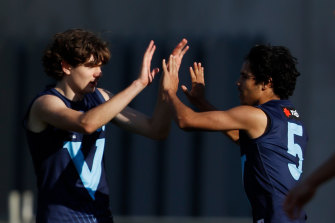 Alwyn Davey jnr, right, has garnered attention after an incredible performance in the under-18 national championships.Credit:AFL Photos

Essendon was contacted for comment, but did not respond prior to deadline.

Davenport said Jayden, too, could still be on Essendon’s radar – regardless of his injury. His physical potential before surgery, as well as an impressive attitude in the face of adversity, were enough to instil his coach with confidence.

“We’ve seen enough to suggest that his healing is no doubt at AFL level, and the challenge, or the frustration of the injuries that he’s gone through in the last couple of years, has been a true test of character for Jayden,” said Davenport.

“I’ve been nothing short of super impressed in regards to his diligence, his communication, his bind to the program. So I’m really rooting for Jayden.”

Will Ashcroft is another father-son prospect to watch after a string of outstanding performances in the past two years, according to Sheehan. Like Davey jnr, young Ashcroft would need to decide whether to follow in the footsteps of his father, Marcus, by donning the blue, gold and maroon.

“He looks to be the best one or two or three kids in the draft,” he said. “He’s got to make a decision, as [Nick] Daicos did, as to whether you nominate father-son, or you go in the open draft.

“He’s an elite talent capable of playing very early next year and having an impact at the senior level straight away. He’s still to declare that, but over the years there’s been very few that haven’t accepted a father-son offer.”

Keep up to date with the best AFL coverage in the country. Sign up for the Real Footy newsletter.