Rivals come and rivals go but Dame Sarah Storey’s biggest race is always with the relentless ticking of the clock.

It’s 29 years since she made her Paralympic debut as a 14-year old swimmer in Barcelona – and nearly three decades and 26 medals later, including 15 gold, she shows no signs of slowing down, in fact quite the opposite.

Indeed her 3.27.057 time would have beaten fellow Brit Rebecca Romero, who won the gold when this event was last contested at the Olympics in 2008.

Storey won Britain’s first gold medal at London 2012 and rather revels in her role as the team’s standard bearer as she did the same here in Tokyo.

You had to feel for team-mate Crystal Lane-Wright, who it seems has spent a career staring helplessly at Storey’s rear wheel, as she took silver, just as she did five years ago.

“I’m my own biggest competitor. I never feel like I am that far ahead,” said Storey, who needs one more gold in Tokyo to equal the all-time British Paralympic record of swimmer Mike Kenny.

“My flatmates will tell you that this week, I have been like: ‘Have I got enough in the tank?’. I never like to assume everything is in that place. I just like to let the legs do the talking on race day.

“It’s quite overwhelming. It’s hard to put into words. I’ve won a medal at every single Games I’ve been to and this is my fourth time in a row winning the individual pursuit.

“I broke the world record in Beijing, in London, in Rio and here but I never expected to go as quick as I did. It is fantastic to see the event getting faster. I just need to keep getting faster as well.

“I knew it was in me but I just needed to get the right day and right preparation. It has been an incredibly difficult preparation because it is so different to what I am used to.

“I just had to call upon all of my experience and know that I was capable of staying calm under that pressure.” 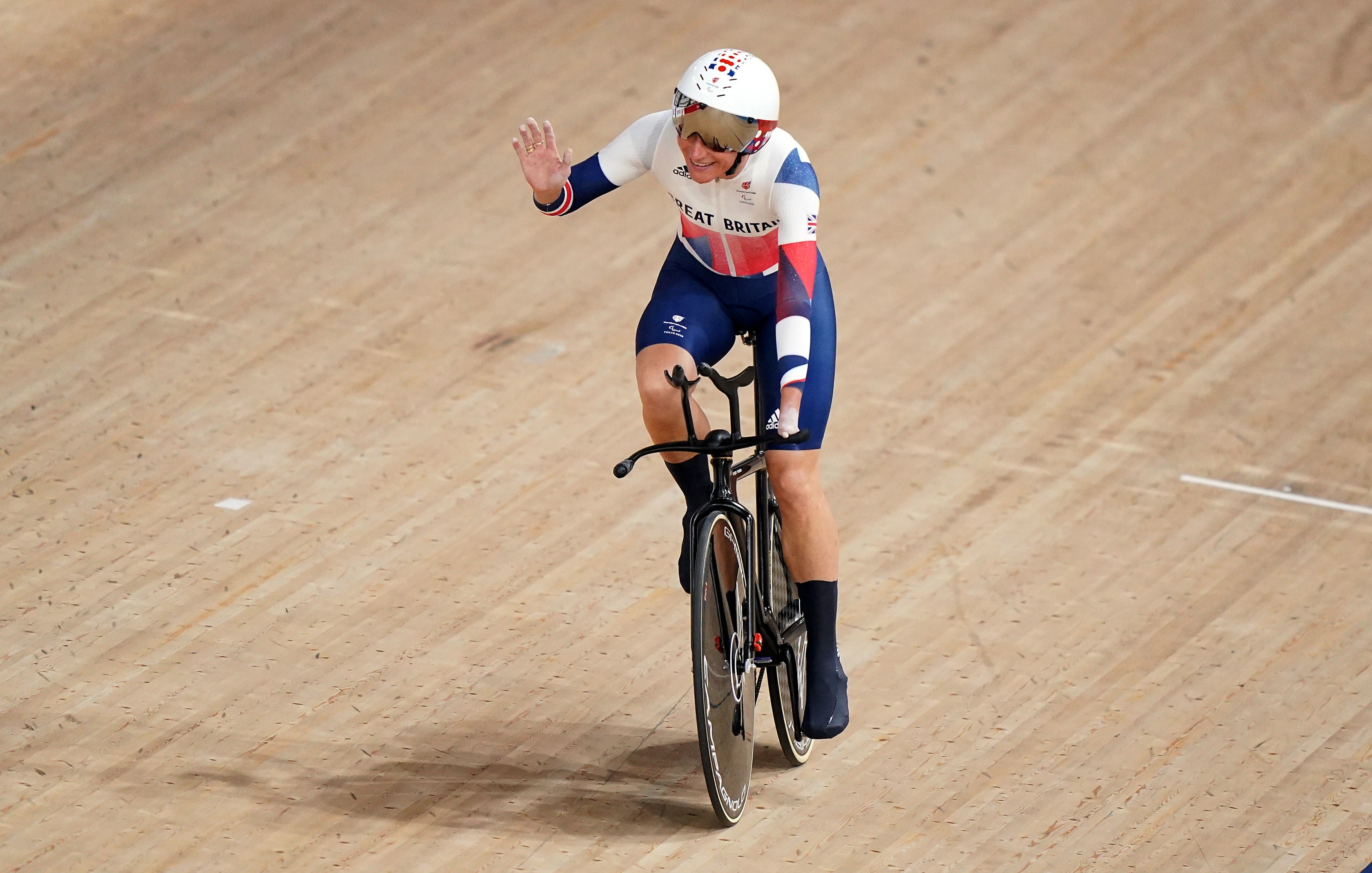 Since quitting swimming for cycling, Storey is unbeaten at the Paralympics, a simply an unstoppable force of nature on the bike. This is the fourth time she’s won this event and don’t bet against her making it five in Paris.

Husband and coach Barney is certainly never surprised by what his wife produces. He watched back home in the Peak District with children Louisa, eight, and Charlie, four, admitting both were dragged – a little reluctantly – out of bed to watch mum make more history.

“I had a good idea she’d get a world record just perhaps not how much she beat it by,” he said.

“Sport is never a foregone conclusion. Everyone always expects that she wins and expects that performance and time. No one really sees what goes into that, the hard work and the detail.”

Perhaps no-one knows this better than Lane-Wright, who took up cycling after being inspired by Storey and now just looks up to her idol from one step down the podium.

The pair will clash again on the road in the time trial and road race, with the latter Lane-Wright’s best hope to break Storey’s winning run – a victory that could deny her overtaking Kenny’s record.

“I think because of the year we’ve had, everything is a bonus,” she said. “I’m not looking at it as a gold, silver, bronze. I think that in this current climate the power of sport is even more than medals at the moment, to be honest.

“Obviously I would love to be here saying I’ve won but I’m happy with my performance, with just getting here really.” 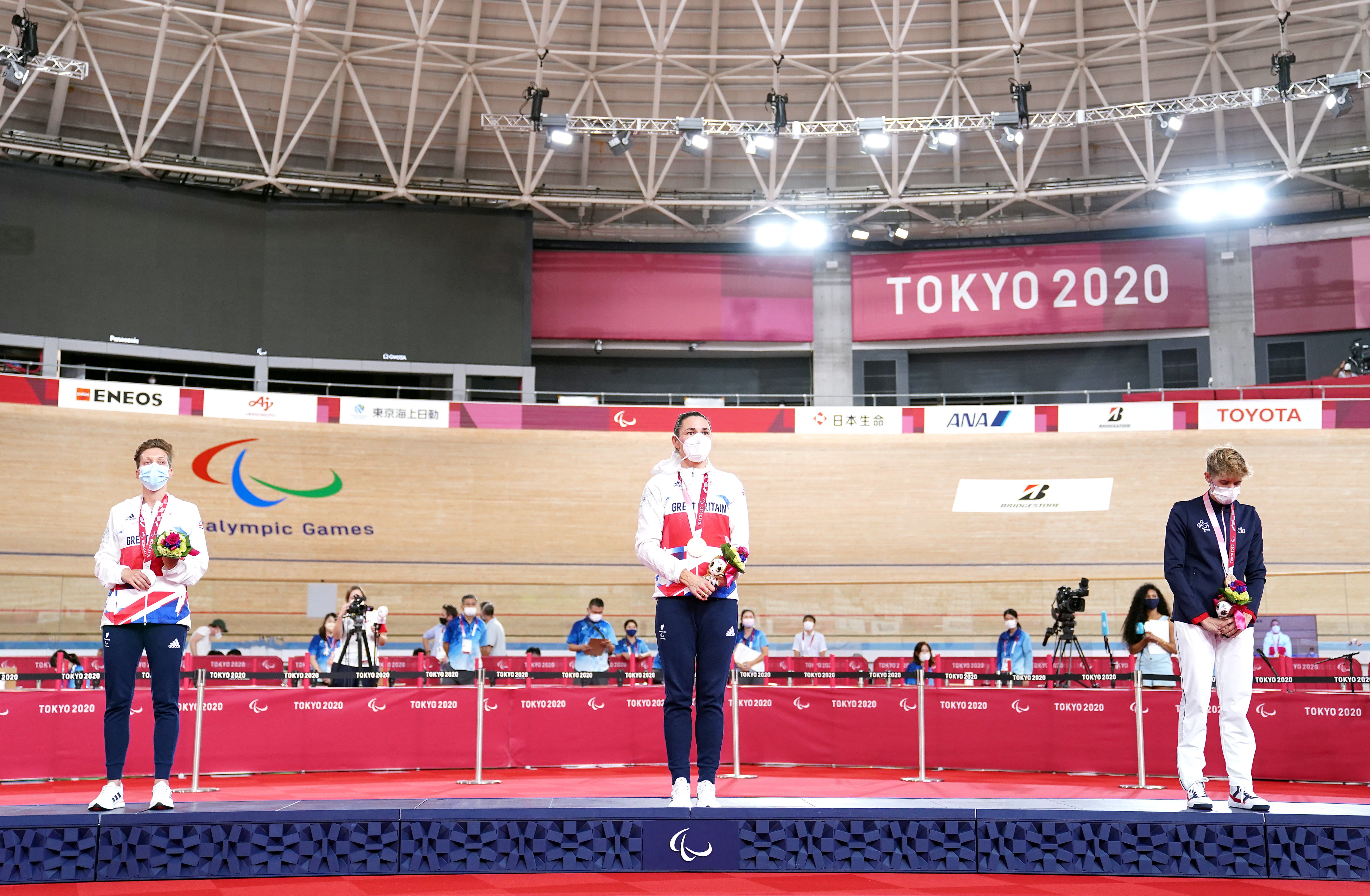 Stephen Bate admitted he took at kicking in the defence of his Paralympic time trial title – but he’s already focusing on a revenge mission.

Bate and pilot Adam Duggleby went quicker than ever before in the 4,000m tandem pursuit but still saw their colours lowered by Flying Dutchmen, Tristan Bangma and Patrick Bos.

The Scot will now look to next weeks’ time trial road event, in which he is both the Paralympic and world champion.

“That’s what you call a classic kicking, we did what we could but it wasn’t enough, their performance was phenomenal and sometimes you need to settle for second,” said Bate.

“Emotionally it’s disappointing but logically we need to be realistic. We gave everything we had, it just wasn’t good enough. I’m just pleased to be standing here with a medal because it could have gone a lot worse. It’s never nice losing but when you get a canning from a bike like that you can still be proud. It’s a medal, just not quite the right colour.”

No one does more to support our Olympic and Paralympic athletes than National Lottery players, who raise around £36 million each week for good causes including grassroots and elite sport. Discover the positive impact playing the National Lottery has at www.lotterygoodcauses.org.uk and get involved by using the hashtags: #TNLAthletes #MakeAmazingHappen