There are several ways to start a story about Alex Volkanovski, the former Wollongong concreter and pint-sized rugby league prop who snapped rival players in half before dropping 30 kilograms to pursue a UFC career, shaking off the perennial underdog tag to become the featherweight champion of the world, a title he was going to defend for a second time before contracting COVID-19 in Las Vegas in March, which led to him coughing up blood, which developed into pneumonia, which threatened his career, before rebuilding his body and lungs and fighting his way back to Las Vegas for his bout against Brian Ortega this Sunday (AEST).

But let’s not start there. Let’s start with what he’s not. He’s not Conor McGregor.

“A lot of people want someone like Conor McGregor, who’s loud and abuses anyone that walks in front of him,” Volkanovski says. “But that’s not me. I’m an easy-going Aussie bloke. Think Crocodile Dundee — but I’ll really wrestle the crocodile.”

UFC divides opinion — considered barbaric by some, understood and adored by others — but you can’t help but appreciate the Volkanovski story either way.

In a sport that trades in trash talk and trashier suits, the 32-year-old from the Wollongong suburb of Windang values substance over style, even if some opponents like Chan Sung Jung (aka “The Korean Zombie”) call him “boring” and fans on MMA forums reckon he’s a “nerd”. 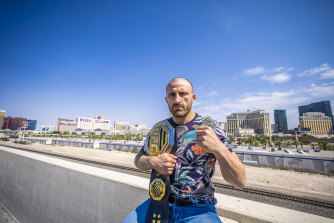 Alexander Volkanovski poses in Las Vegas ahead of his UFC 266 title defence in Sin City this weekend.

“You have a lot of people who wish I wasn’t champion,” Volkanovski says. “There’s a lot of Americans who wish that belt was over there. A lot of big gyms expect a champion to come from their gym. We’re just from a small town, a little local gym, and we have a beast coming out of here. You’ll always have guys who don’t understand the sport. They expect the flashy stuff. We’ve proven we don’t need all that shit.”

“He is, pound for pound, one of the best fighters in the world,” White tells the Herald. (For the record, Volkanovski is ranked fourth overall in the UFC). “He’s on a 19-fight win streak and if he gets through Brian Ortega it’s a massive win for him. Right now, I believe Brian Ortega is one of the best guys in the world in the featherweight division and the toughest test for Alex. If he [Volkanovski] gets through the fight this Sunday, this kid is on his way to being one of the best featherweights ever.”

Volkanovski was hardly classified featherweight when he was wreaking havoc in the middle for the Warilla Gorillas rugby league side just over a decade ago. 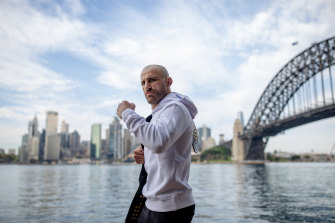 Volkanovski has recovered from COVID-19 and is ready for American star Bryan Ortega.Credit:Getty

Standing 168cm and weighing nearly 100kg, he was more cube than feather, taking tough runs off his side’s try line, two and sometimes three charges in one set and always reeling off a quick play the-ball.

On the other side of the ball, he cut down bigger men with perfect technique, a legacy of competing in Greco-Roman wrestling as a junior when he won a national championship.

Former Cronulla and Wests Tigers winger Beau Ryan was four age divisions above Volkanovski and playing for Wests Illawarra but knew of the younger player’s reputation.

“He was the best player in the group,” Ryan recalls. “Fast, powerful and seemingly four foot tall: he just cut blokes in half.” 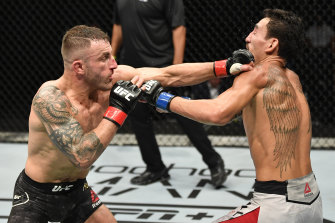 Ryan went on to play in the NRL while Volkanovski became a Group 7 legend at a young age, winning the Mick Cronin Medal in 2010 as the best player in the competition. A St George Illawarra fan, he had designs on an NRL career, and played against Dragons stars of the future like Brett and Josh Morris and Trent Merrin in junior reps, but the moment slipped by.

“I ain’t anything special, man,” he deflects when I bring up his rugby league career. “I was never the most athletic kid; I was heavy, I was overweight, 97kg and I’m 5 foot 6, playing prop. Pound for pound, I’ve always been very strong. That’s a trait of mine. I could tackle but running was more my thing. I’d give that same energy that whole game. I’d have that diesel motor who would just keep going.”

That was 10 years ago. When the NRL didn’t come knocking, Volkanovski turned his attention on a different set of sporting letters — UFC — shedding kilos to get to a weight more appropriate for his height when stepping into the octagon.

“I remember sitting with him at a wedding when he was trying to drop the weight,” recalls Ryan. “We went to the back of the reception to weigh his broccoli and chicken. He’s a good guy, bro. He loves his mates, his town, his team. He’s been given no handouts and done it the hard way.”

Volkanovski signed with the UFC in 2016 and took just three years to win his first world title, defeating American Max Holloway. He defended his title in the rematch in July last year.

He was scheduled to fight Ortega in March before contracting COVID-19. It floored him.

“It knocked me around,” he says. “When I first tested positive, I didn’t really have any symptoms. Then the normal symptoms came on: the headaches, fever, harder to breathe, lethargic. Then the breathing started getting more difficult, I started coughing up blood, that’s when we decided to get a check-up. Then I got pneumonia because the infection went into the lungs.”

Laying in a Las Vegas hospital bed, did he ever fear his career was over?

“I’m a positive person, so I didn’t think that,” he says. “We didn’t want scar tissue on the lungs, which is common. That’s been career-ending for many people. The doctors didn’t want to tell me that until later. I was worried: would this affect my gas tank? I’m known for my gas tank. I can go for days. I knew I’d pull through, but I was worried about the long-lasting effects.”

Once he recovered, it took Volkanovski a further six weeks before he could train at full strength again. When I spoke to him a week ago, though, he was brimming with murderous intent.

Then our discussion turned to Ortega, the No.2 challenger to his title. 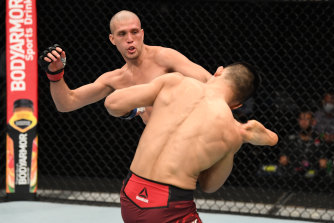 Bryan Ortega is the No.2 contender to Volkanovski’s featherweight crown.Credit:Getty

“I know I’m the better fighter,” Volkanovski says. “In this sport, everyone has a puncher’s chance. That’s the crazy sport we play. I’m always aware of that. But I’ll outclass him. He’s durable, but he doesn’t have the gas tank I have. I’m feeling third round. That’s when he’ll start to crumble. Even if I get a submission, or I punch his head through the canvas, I’ll get him down and start working that dad bod of his.”

I tell him I’m not the world’s biggest UFC fan but appreciate that he’s known more for his strategy and fitness than a signature kick, punch or grapple.

“I’ve got fight IQ,” he says. “I like to use the analogy that we’re playing chess. A lot of guys like to use their castles and knights. That’s all they use. They’re not defensively sound, they’re not in there for the long game. They don’t know strategy. I know every little pawn, every piece. This one, I will use all my pawns, all my castles but let me tell you, the big guns will be coming out, I’ll be zoning in with these castles, the knights, the queens … Third round.”

What sport are we talking about again?

“When we work out our game plans, we go into fine detail; certain positions before a combo is made. We’re making him throw what he thinks is the right punch at the right time, but we’re usually instigating that.”

A little bit of animosity helps, too.

When Volkanovski was released from hospital, he stayed in Las Vegas as one of the coaches in The Ultimate Fighter, the reality TV show that helps identify upcoming UFC talent.

He coached one team while Ortega coached the other. There was often a lot of sledging and pranking. Ortega seemed like a nice enough guy when the cameras were rolling.

“To be honest, the producers did him a solid,” Volkanovski reveals. “Is he the worst human being? No. But he plays it like he’s this nice, respectful guy who cares about others, but I see right through it. He’s very sensitive. He’s not doing interviews with Australian media. He won’t go on a podcast if a guest who’s been on there before has been critical of him. For The Ultimate Fighter, it was in his contract that I couldn’t touch his car while he could prank mine.

“Nobody knows these stories. I’m going in deep. I’m giving you insight I’ve given nobody. He could prank me, but I couldn’t prank him. I mean, what a sensitive little princess.”

Conor McGregor couldn’t have said it better himself.