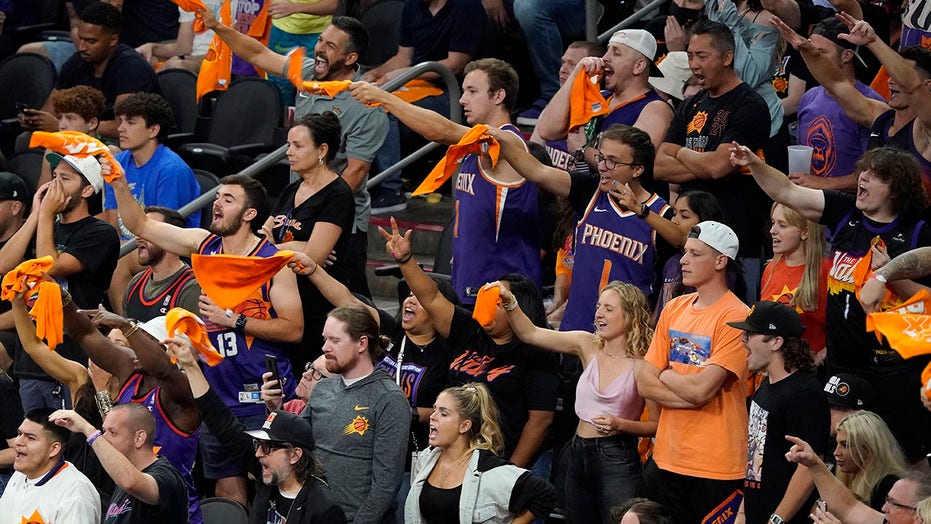 The Phoenix Suns had to warn fans about their behavior again this week after a video showing another fight in their arena during a watch party for Game 3 of the NBA Finals as the team hit the road to play the Milwaukee Bucks.

The video showed one fan dump a water bottle on a person in front of them. A brawl ensued with multiple people getting involved. It was unclear what happened to spark the melee.

The Suns released a statement on the issue Monday.

“A friendly reminder to all Phoenix Suns fans across the Valley and beyond about what it means to rep your team. Revel in the excitement of the Suns and the 2021 NBA Finals. Cheer loudly. Wear your gear proudly. And show respect for your fellow NBA fans no matter who they rep,” the team said.

“Violence and action intended to incite violence has no place anywhere. For those who stepped out of line at Sunday’s Road Game Rally, we’re investigating what took place and will take appropriate action with our partners in law enforcement.”

The Suns had to release a similar warning to fans for their conduct after a brawl between Phoenix supporters and those wearing Los Angeles Clippers jerseys.

“The Phoenix Suns are enjoying a deep run in the NBA postseason, and while the intensity on the court continues to heat up, we still expect Suns fans to keep their cool off the court. We will not tolerate the violence that erupted following Sunday’s game at Phoenix Suns Arena,” the statement read.

“We consider Suns fans to be the best in the world. Fighting or taunting to incite violence is not reflective of our organization or how fans from across the Valley should be represented. We’re better than that. Let’s work together to provide a model fan experience that is fun, enthusiastic and respectful.”

The incidents come after a Suns fan fought a Denver Nuggets fan as Phoenix was taking on Denver on the road in the conference semifinals. The fan went viral for telling the Nuggets fan’s friends “Suns in 4” after pummeling the man.

Suns guard Devin Booker rewarded the fan’s behavior. His reps told ESPN they were able to locate Nick McKeller, a lifelong Suns fan, and send him an autographed jersey and a ticket to a conference final game.

“There are other videos floating around showing them pulling on my jersey and pouring a beer on me. From there, instincts kick in,” he said. “As a person, I’m not a fighter. I’d rather give you a hug and a high five, and go on our way. All acting out of self-defense. I’d never promote or condone physical violence.”

The Nuggets fan in question spoke out about the incident and admitted to pouring beer on McKeller’s head. He said he only came away with a scratched nose.

Fan behavior has been something the league has kept an eye on in this postseason. Russell Westbrook, Kyrie Irving and Trae Young were among those on the receiving end of abhorrent actions.