The New York Jets and 40 years of hope, pain, outrage and hilarity

December 1981 was a great time to arrive in New York City for the first time. The place was agog. The town’s two American football teams, the Jets and Giants, were playoff bound. It was hard not to get sucked into the excitement of the NFL.

Gridiron was exotic to British eyes. There was next to no coverage in the UK. Young readers of imported Marvel and DC comic books would look at the advertisements for collections of mini helmets with bewilderment. They made no more sense than the ads for x-ray glasses and sea monkeys.

It was unimaginable then that the New York Jets would ever play at White Hart Lane, as they will tomorrow against the Atlanta Falcons. The NFL was a slice of Americana that was still locked on the other side of the Atlantic.

The uniforms and conventions of the game are now instantly recognisable but 40 years ago the sight of helmets and shoulder pads was jarring. So was the violence. Back home, football was bedevilled by trouble on terraces. In the NFL, the savagery was all on the pitch. It was very seductive.

My cousin lived in Greenwich Village. He had been on the QE II liner, stopped off in Manhattan and decided to stay. He explained that the Jets were the blue-collar team and the Giants drew their support from wealthier, more traditional types. He was a Jets fan. The decision was instant. I was with him. He was an Evertonian, I was a Liverpudlian but we had the Jets in common. 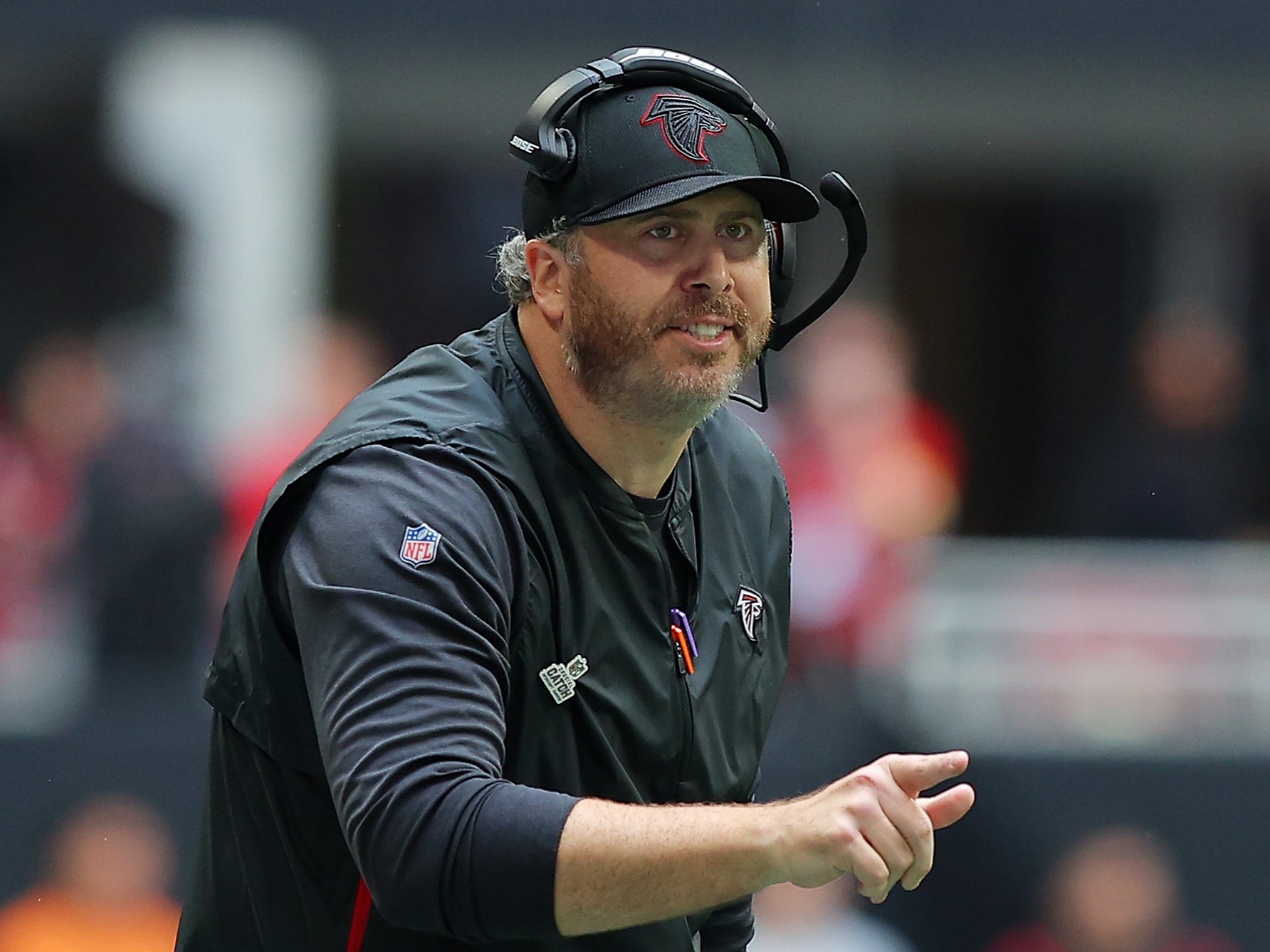 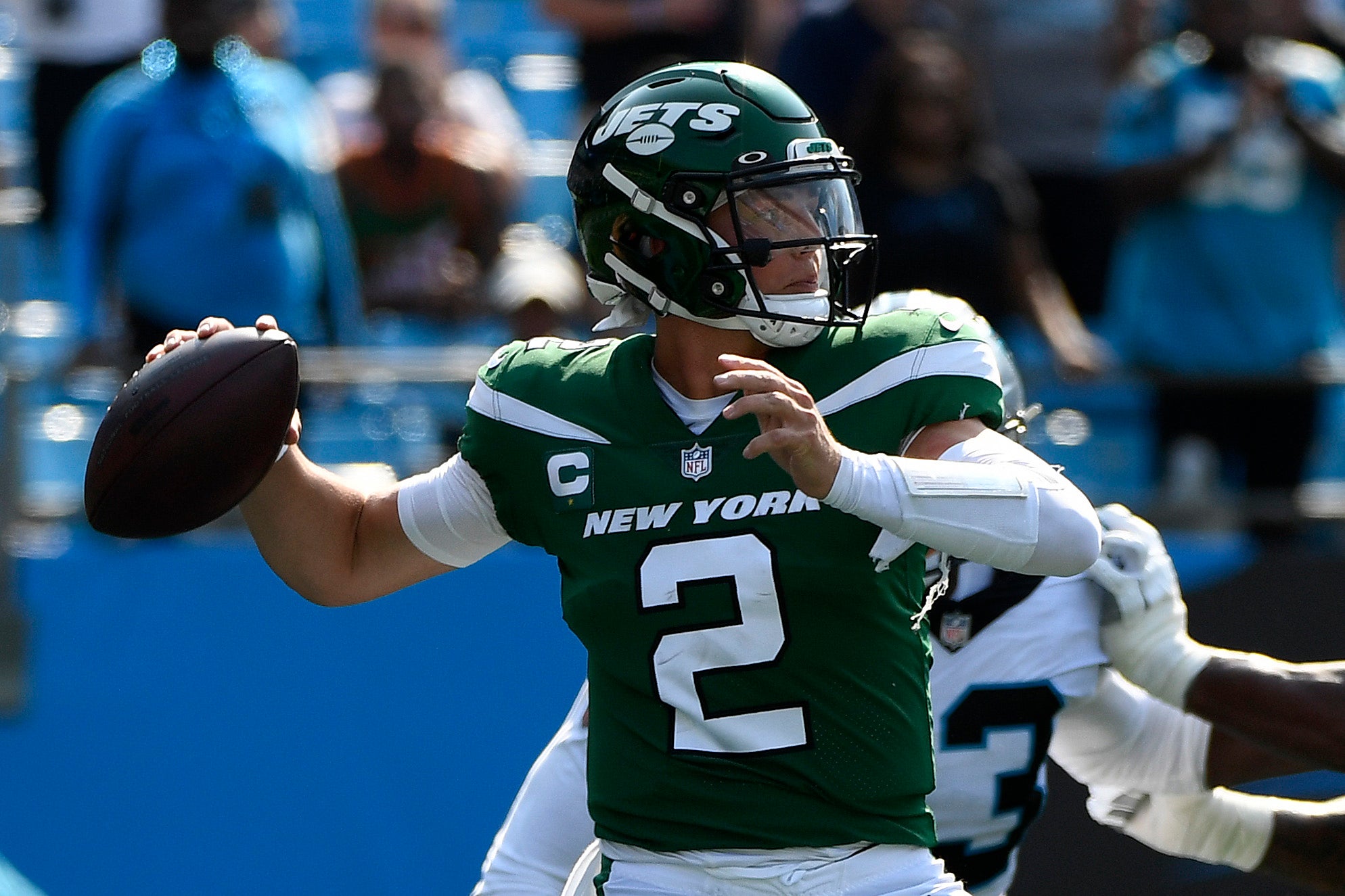 I was leaning that way, anyway. They wore striking Kelly green uniforms. The helmet had a stylish logo that incorporated a plane’s tailfin. Despite coming from a generation of football fans who had discarded colours when going the match, the tee-shirts and jackets in New York’s shops were too cool not to buy and wear. A TV channel showed a documentary about ‘Broadway’ Joe Namath, who led the team to an unlikely Super Bowl win in 1969. It focused on the Namath soap opera, making his career almost incidental. Maybe at first it was style over substance that was attractive but it felt like being at the cutting edge of sport.

That heady Christmas contained warning signs. The reason New York was so excited was that neither of its franchises had been in a playoff game since the 1960s. But it was too late to back out. At home, it seemed, you were born to support a club: it was your birthright, for better or for worse. This was the first time I chose a team. The same principles applied in both situations. Once you start supporting, you are stuck with them. The Jets lost that playoff game 31-27 to the Buffalo Bills at Shea Stadium. They were 17-0 down after a quarter but rallied. As the clock ran down they were on the 11-yard line of the Bills but Richard Todd, the quarterback, threw an interception with two seconds left. The pattern was set.

So began four decades of thwarted hope, pain, outrage and hilarity. When you are a Jets fan you have to laugh. You learn to downplay dreams and expect the worst. You come to understand that pessimism pays off.

The early days were quite good. The next season, 1982, was the first year Channel 4 broadcast a weekly NFL highlights programme. The Jets, with a defensive front four nicknamed ‘The Sack Exchange,’ reached the championship game, the Super Bowl semi-final. The contest, a 14-0 loss to the Miami Dolphins, had an element of dark farce. Florida was suffering bad weather and the Orange Bowl surface was left uncovered as a storm hit. Walt Michaels, the Jets head coach, had a longstanding hatred of Don Shula, his Dolphins counterpart, and believed the boggy pitch was a deliberate ploy. The defeat in what became known as the ‘Mud Bowl’ pushed Michaels, who had deepening alcohol problems, over the edge. He parted company with the Jets 17 days later. It would be 17 years before the team reached such exalted heights again.

The 1980s were a wild ride and a period when the Jets turned self-destruction into an art form. They drafted Ken O’Brien in 1983 ahead of Dan Marino, something that would come back to haunt them in so many ways. The young quarterback went to Studio 54 in the company of Mark Gastineau, a flamboyant brute who was the most visible member of the Sack Exchange. Gastineau challenged a bartender to an arm wrestling contest and lost. The defensive end erupted in a bout of roid-rage and a brawl broke out. O’Brien got caught up and was arrested and accused of throwing a punch. He was acquitted but, unable to prepare because of time spent in court, he lost his job as a starter. It was entertaining but it wasn’t football.

The Jets moved out of Shea Stadium in Queens to share Giants Stadium in New Jersey. Not only did it underline the sense that they were the second team in the area but it led to some strange decisions. They decided that Jerry Rice would struggle on the Meadowlands astroturf and drafted a wide receiver called Al Toon. Had they remained at Shea with its natural grass, the Jets would have taken Rice. How history might have been changed. The biggest difference would be that Rice, the San Francisco 49ers great, would probably have never reached the Hall of Fame.

Gastineau is remembered for a number of things. The NFL changed the rules making celebrations a penalty because of his ‘sack dance’ over downed opponents. He had a fiery relationship with Brigitte Nielsen, the statuesque Playboy model and actress. His signature hit on a quarterback came in a playoff game against the Cleveland Browns in 1987. With less than four minutes left, the Jets led by 10. Bernie Kosar was backed up on his own 18 yard line and threw an incomplete pass that should have set up a third down and 18. But there was a flag on the play. Gastineau had slammed into Kosar and was called for a late hit. Cleveland came back and won the game in double overtime. 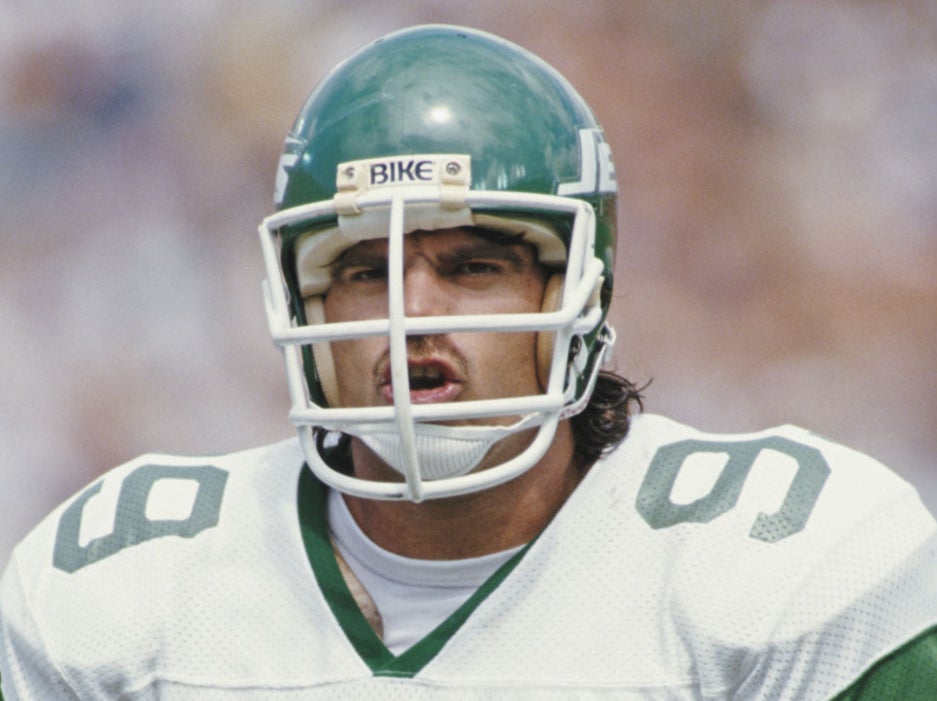 It was a year that Jets fans believed there was a realistic chance of reaching the Super Bowl. To add to the pain, the Giants won the Vince Lombardi trophy.

By now, the realisation had hit me that this was a team with calamity in its DNA. The intervening years proved it. Only the Jets could bring you ‘the butt fumble,’ when Mark Sanchez misread a play, slammed into his own lineman’s backside, spilled the ball and allowed the New England Patriots to run it in for a touchdown. He was knocked flat by his team-mate’s arse. It was a new landmark in Jets history.

That was nine years ago. Three years later Geno Smith, another unfortunate quarterback, had his jaw broken by a linebacker. A Jets linebacker. In the Jets locker room.

If the Jets chew up quarterbacks, they spit out coaches. Pete Carroll lasted one season. His tenure started well. The team were 6-5 but fell to the curse of Miami. Marino still harboured grudges against those who overlooked him in the draft. No one paid for it more than the Jets. With time running out, Carroll’s players expected the Dolphins quarterback to stop the clock. Marino faked to spike the ball and as the defence relaxed, threw it into the end zone for a touchdown. The season ended there for the Jets, who did not win another game.

Rex Ryan, who managed to reach two successive championship games in the 2000s, became a laughing stock when his wife posted foot fetish videos online. The private peccadillos of ‘Sexy Rexy’ seemed a natural occurrence in the surreal tradition of the Jets. Most coaches come and go and barely leave an impression.

Even Namath, the one man whose reputation seemed untouchable, humiliated himself on live TV. Broadway Joe was deep into retirement in 2003 when he was interviewed during a game by Suzy Kolber, a sideline reporter half his age. Asked about the team’s troubles, a very drunk Namath changed the subject. “I want to kiss you,” he said. “I couldn’t care less about the team struggling. I want to kiss you.”

That phrase struck home. I couldn’t care less about the team struggling. We all knew that feeling – we just didn’t make the link between that and being a sex pest. 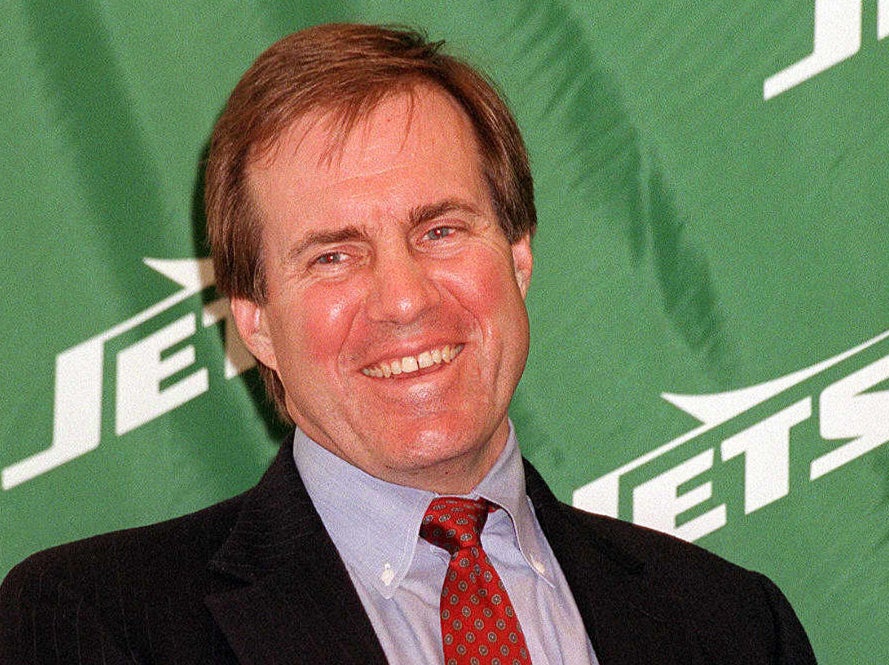 But the worst moment for the Jets, the defining moment, came from one of the ugliest kiss-offs in sports. In January 2000, Bill Belichick became the Jets head coach. A day later he left the job, scrawling a resignation letter on the back of a paper napkin. He drove up to New England, took the Patriots’ job and the rest is history. The Jets were angry. They got some draft picks as compensation. New England got six Super Bowl wins.

There are other franchises in the NFL which are dysfunctional but the Jets have turned ineptitude into a unique selling point. New eras are on a three-year cycle. Robert Saleh and Zach Wilson are the latest coach and quarterback aiming to break the hoodoo. But for Jets fans, it’s part of the identity.

And the worst thing? A decade or so ago the cousin who converted me to the game asked with scorn why I was wearing a Jets tee-shirt. It’s down to you, I replied. He was outraged. “No, no,” he said. “I’ve always been a Giants fan. They wear blue and are the older club, like Everton. And they’re not a joke.”

Still, at least I’m in on the joke. Let’s go Jets.