Another failed spring football league is seeking a comeback.

The United States Football League, which previously existed for three seasons in the mid-1980s, will be returning to action next spring, the league announced Thursday. It will feature a "minimum of eight teams," according to a news release, and is partly owned by Fox Sports, which also will serve as its official broadcast partner.

"The USFL is back! See you in 2022," former USFL quarterback Doug Flutie said in a promotional video posted on social media Thursday. "It's football. It is real football. It's pro football at the highest level. It's just being played in the spring."

The USFL is back! Catch all the action next year on FOX Sports.

The original USFL was initially created as a spring foil to the NFL, an alternative source of programming to capitalize on the nation's football interest during the NFL's offseason.

Though the USFL only lasted three seasons, from 1983 to 1985, it featured several players who went on to have successful NFL careers, including Herschel Walker, Steve Young and Flutie. It also featured a famous owner, Donald Trump, who purchased the New Jersey Generals.

The USFL ultimately collapsed after trying to move its games to the fall and directly challenge the NFL. At Trump's recommendation, USFL owners filed an anti-trust lawsuit against the NFL in 1986 and suffered a devastating defeat, receiving just $1 in damages. It effectively folded thereafter. 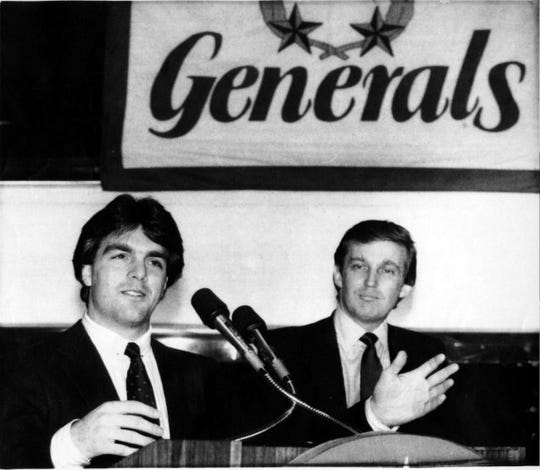 In its announcement Thursday, the new iteration of the USFL said it "retains rights to key original team names," though it did not specify which teams will be included. The original USFL featured 12 teams, including the Generals, Los Angeles Express and Memphis Showboats, among others.

Woods is also the CEO of The Spring League, one of several minor spring leagues that have popped up in recent years. The Alliance of American Football played part of one season, in 2019, before filing for bankruptcy. The XFL returned for part of another season in 2020 before meeting a similar fate, in the wake of the COVID-19 pandemic.

The XFL has since been sold to a new ownership group, led by actor Dwayne "The Rock" Johnson and business partner Dany Garcia. The league initially said it would plan to return to action in 2022 before later putting those plans on hold while exploring a potential partnership with the Canadian Football League.