Home » Sport » Who is Megan Rapinoe? The iconic Team USA winger aiming for one last gold in Tokyo

Who is Megan Rapinoe? The iconic Team USA winger aiming for one last gold in Tokyo

Megan Rapinoe, 36, burst onto the global stage at the 2011 World Cup in Germany when she scored a screamer against Colombia and celebrated by grabbing an on-field microphone placed near the corner flag and crooning “Born in the USA” in the style of Bruce Springsteen.

A star was born.

Since then, the winger has won gold at the London 2012 Olympics and both the 2015 and 2019 FIFA World Cups as an integral part of Team USA.

She was named player of the tournament two years ago in France after scoring six – including a spotkick in the final against the Netherlands – and picked up both the Golden Boot and that year’s Ballon d’Or Feminin (Leo Messi was awarded the men’s trophy).

Rapinoe also caused a major political stir back home during that tournament, caught on tape declaring “I’m not going to the f***ing White House” in the event that her side secured the trophy, expressing her disdain for the divisive policies of then-president Donald Trump and advising her teammates to “think hard” before accepting any honours from his administration. 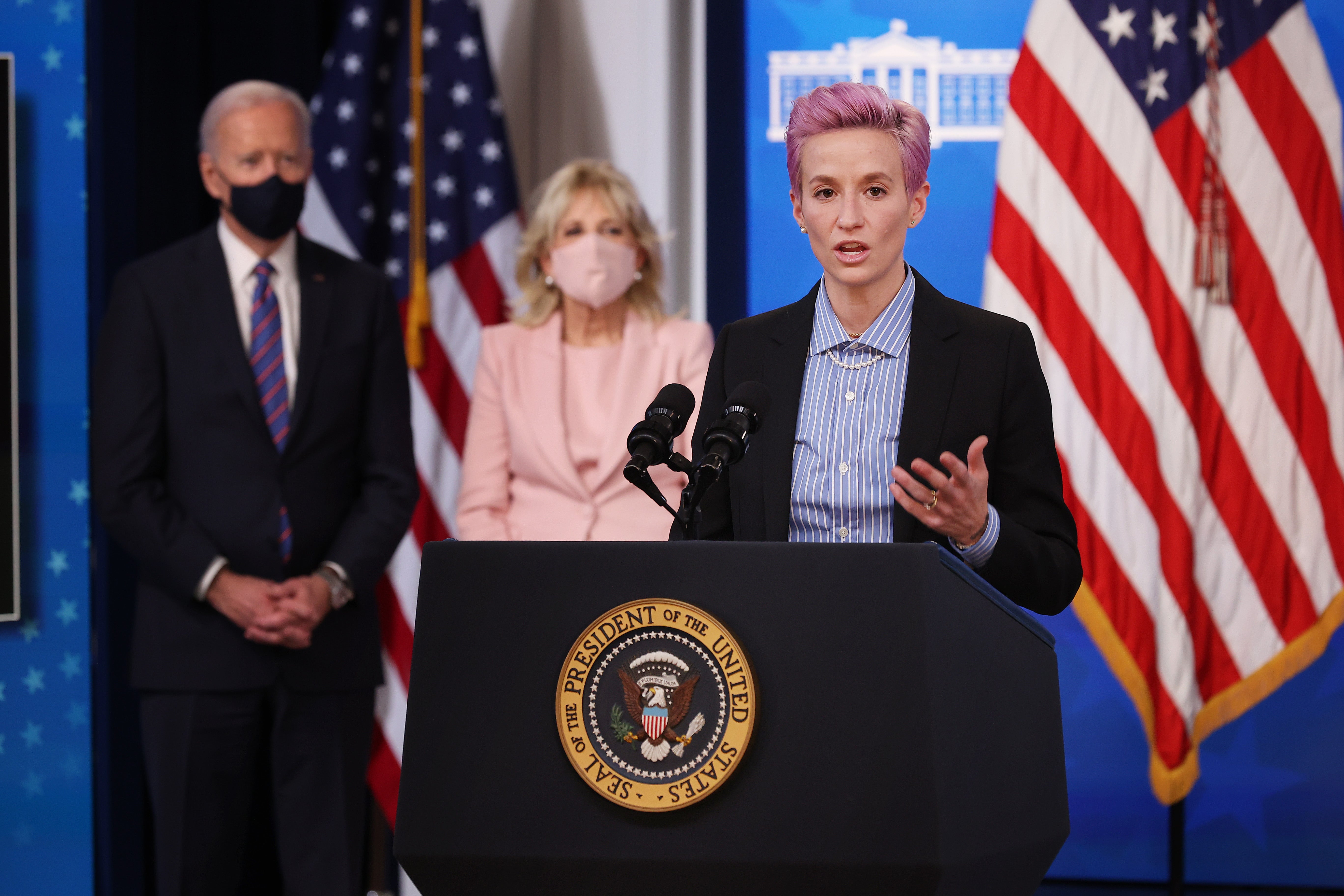 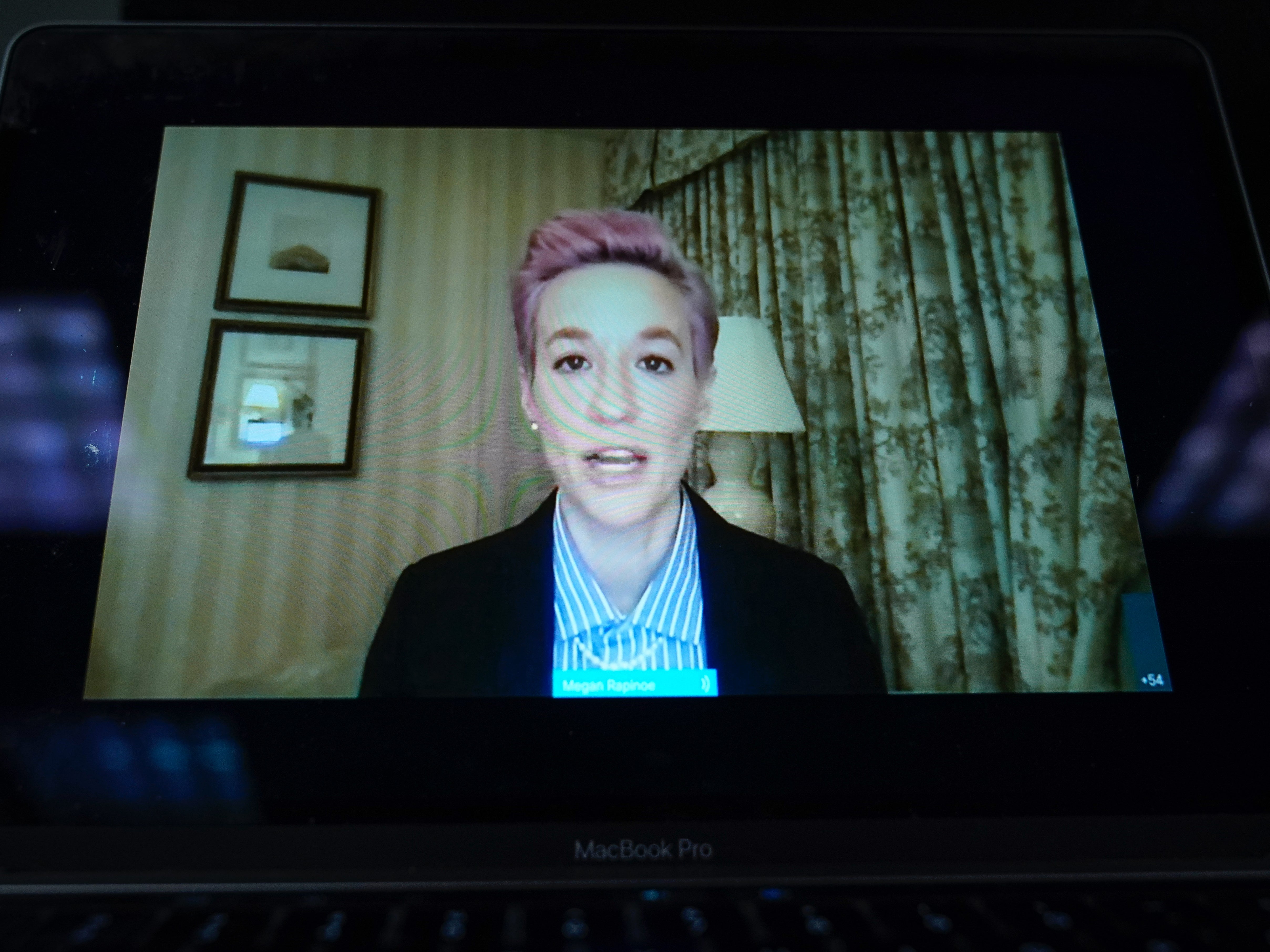 After they did indeed win the World Cup with a 2-0 victory over the Dutch, Rapinoe did visit Washington, DC, after all – but only as a guest of Democratic lawmakers Nancy Pelosi, Chuck Schumer, Alexandria Ocasio-Cortez and Ayanna Pressley, a calculated snub to the blustering Republican commander-in-chief.

She has since continued to use her celebrity to campaign for LGBT+ rights causes and for equal pay for women, speaking on that issue at 1600 Pennsylvania this March at the invitation of Trump’s successor, Joe Biden.

Megan Rapinoe was born in Redding, California, on 5 July 1985, one of five children including a twin sister, Rachael, who was also a professional footballer.

Her brother Brian first turned his sisters on to the sport and Megan has since spoken movingly about his subsequent battle with drugs and struggle to stay out of prison.

As a teenager in high school, Rapinoe played for Elk Grove Pride in Sacramento before enrolling at the University of Portland in Oregon, where she proved herself a prolific goalscorer for the Portland Pilots.

Turning professional thereafter, her club career has taken her from the Chicago Red Stars and Philadelphia Independence to the short-lived MagicJack team in Boca Raton, Florida, to Sydney FC in Australia, the Seattle Sounders and to Olympique Lyonnais in France.

Since 2013, she has played for OL Reign in Tacoma, Washington, favouring the US Pacific Northwest region as her partner Sue Bird, a basketball superstar and fellow Olympian, plies her trade nearby for Seattle Storm. 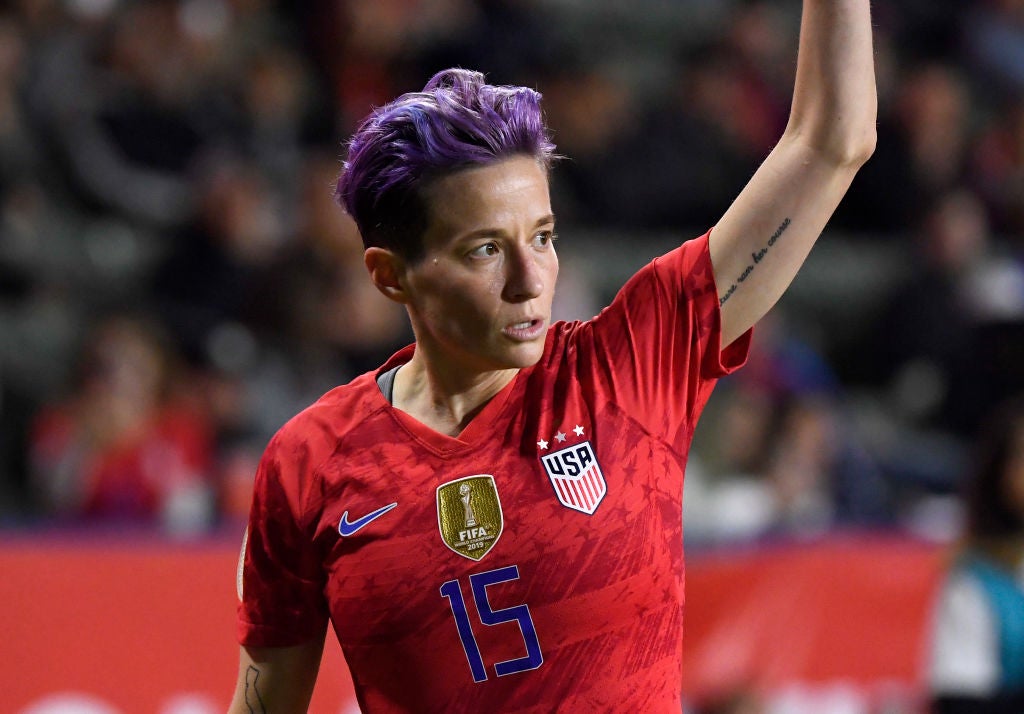 Megan Rapinoe in action for the US against Mexico in 2020

The pair announced their engagement last October and both will have eyes on gold medals in Tokyo, likely to be their final appearances at the Olympic Games.

Rapinoe arrives in Japan having already made 179 appearances for her country, scoring 59 goals and making 70 assists.

She may not start every game at this late stage of her career, particularly given the demanding fixture schedule, but will pose a significant threat whenever we see her.