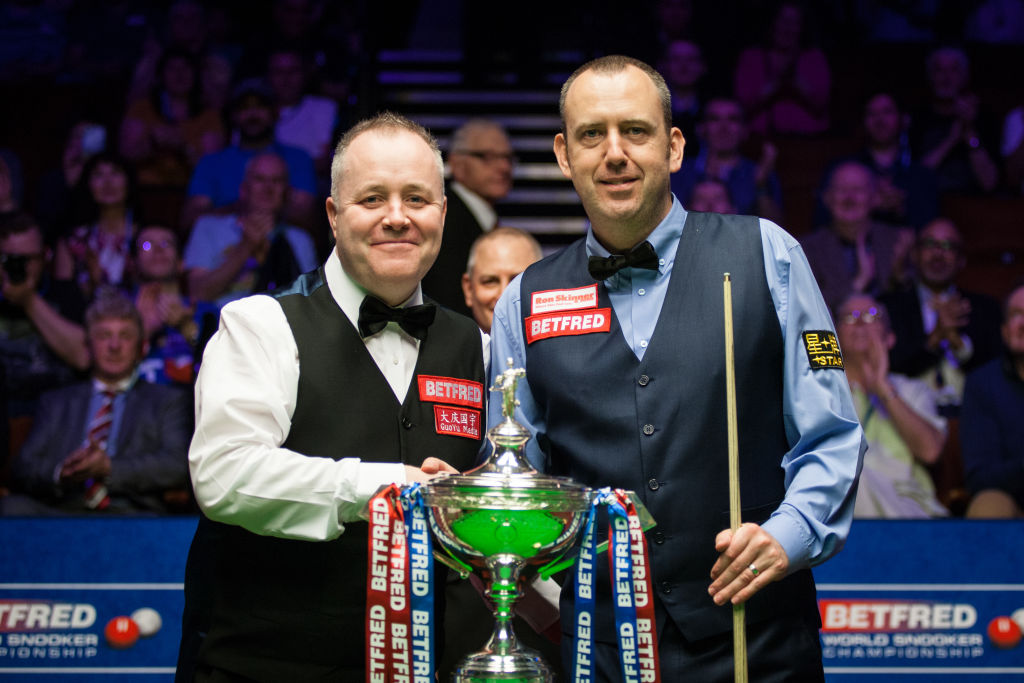 Mark Williams feels embarrassed to be classed alongside John Higgins and Ronnie O’Sullivan in the Class of ’92, saying: ‘Please don’t mention me in them two’s bracket, for goodness sake. I cringe.’

Williams is well deserving of his place alongside Higgins and O’Sullivan in the famed Class of ’92, with the three players being among snooker’s elite for nearly 30 years.

However, despite his three World Championships and 24 ranking titles in total, the 46-year-old sees himself as comfortably behind his old rivals and would rather not be placed alongside them.

‘People go on about the Class of ’92, put my name in but I get embarrassed,’ Williams told Metro.co.uk. ‘I’d rather not get talked about in the same breath as them two because they’re the best two players I’ve ever seen in my life.

‘All the tournaments I’ve won, I’ve had to nick them off John, Ronnie and [Stephen] Hendry, or 90 per cent of them. So I’m more than proud of the ones I’ve nicked and won, but I just cringe at the Class of ’92 thing, please don’t mention me in them two’s bracket, for goodness sake. I cringe. I could never put myself anywhere near them pair.’

Higgins suffered painful defeats in the finals of the recent Northern Ireland and English Opens [leading both 8-6 and losing 8-9] and the Scot made contrasting statements during his campaign in the latter.

En route to the final the four-time world champ said he believes he’s a better player now that he has ever been, but after the final defeat to Neil Robertson, doubted his ability to cut it at the top level anymore.

Williams disagrees with both statements, feeling that both John and Ronnie are not as good as they once were, but are still more than good enough to compete with anyone.

‘I don’t agree with John saying he can’t cut it at that level,’ said Williams. ‘Him and O’Sullivan can cut it in any tournament, they’re that good.

‘They’re in the top 5 or 6 in the world now and they were 25 years ago, and they’re nowhere near as good now as they were 20 years ago, but still getting to finals.

‘It’s all about opinions, but when he said that [he’s as good as ever] I was surprised because I don’t think he is and I don’t think O’Sullivan is. Nowhere near as good as they used to be. I think most people will agree with me there, but they’re still bloody good. Top 5 or 6 after 25 years, it shows how good them pair are. As I said, when people mention me with them I cringe.

‘5-10 years ago he [Higgins] would have wrapped that final up [against Robertson] but age catches up with us all. Some of the balls you miss now, you can’t understand why you miss them, but that’s just the way it is.

‘He wouldn’t have [done that in the past]. The last two finals, 10 years ago in his prime, same as Ronnie lost five finals last season, it just wouldn’t have happened years ago, they would have probably won 90 per cent of them.

‘Age waits for no man, you’re not going to get better the older you get, you’re going to decline a bit. There’s nothing wrong with it, he’s still been to two finals, Ronnie’s getting to finals, they’re just a different league, they’ll get to finals when they’re 50.’

The Welshman feels that he might be putting a little less pressure on himself than his rivals, not expecting to win more tournaments at his age.

‘The finals I’ve got to in the last few years, I’m going into them not even caring,’ he said. ‘Obviously I want to win but if I lost I don’t care.

‘I’m just happy to be in the final, try your best, you don’t know how many are going to be left, if you lose, so what, you’re expected to lose, most people probably expect me to. Just enjoy it.

‘I’ve probably won more finals in the last few years than the other two, maybe because of that, I don’t know. If I twitch up and miss and throw one away, so be it, I’m expected to.’

The Welsh Potting Machine rates the Rocket and Wizard above him in the all-time list, but where does he put himself? Alan McManus recently found it tough to separate Williams and Mark Selby and number five and six on his own list [with Steve Davis at #4], but the Cwm cueman reckons he is now behind the Jester.

‘O’Sullivan is the best player I’ve ever seen, by a long way,’ said Mark. ‘For me John Higgins is next, he hasn’t won as many Worlds as [Stephen] Hendry, but neither has Ronnie, but I put both above Hendry and Hendry at number three.

‘You’d have to put Selby in front [of me]. One more world title, but that’s for the other people to talk about, I’m not getting involved. As long as you’re in the conversation you’ve done alright for yourself.’

Williams has flirted with retirement in recent years but is now set on not hanging up his cue until he drops off tour, and then plans to keep playing in the Seniors if that remains an option.

O’Sullivan said at the recent English Open that he may only have three more years on the main tour, but Williams is having none of it.

‘You take it all with a pinch of salt, I know he’s not retiring. But I also know that some events he’s not there, just messing about.

O’Sullivan may be the sternest challenge Williams has faced on the baize, but he faces another one on Tuesday at the Champion of Champions when he takes on Neil Robertson, who he holds in the highest regard.

When the Thunder from Down Under won the English Open Williams tweeted: ‘Neil Robertson is the best cueist I have ever seen,’ and he is sticking to that.

‘Yeah he is, I’ve always said that, he’s a brilliant cueist,’ said Mark. ‘Look it’s going to be tough for me to beat him. I’m just going to go in and try and enjoy it, because I’m playing, not just one of the best cueists and best players now, but one of the best ever. The clearance he done in the last frame [to beat Higgins at the English Open] was as good as anything, it was just brilliant.’

Neil Robertson is the best cueist I have ever seen. #onlymyopiniodnneofrehtjatercome

Many consider it a mystery that Robertson has only won one World Championship, given his immense quality, and Williams is also surprised, especially as he has spent time studying the Aussie and is a huge fan of his game.

‘I’m surprised at that, with his action, with everything,’ he said. ‘He’s good to watch because it’s difficult what he does. His cue is so flat and so parallel, so good, so straight. And for how tall he is it’s not easy to get down and get it that parallel, so it’s good to watch.

‘I’ve tried to watch him quite a bit to see how he actually gets down that low, it’s really good. With all that I’m surprised he’s not won the Worlds a couple of times.

‘I can see what he says about the Crucible being small for him because he likes to stand right back on the shot and get right down low and it’s difficult to do that at the Crucible, but I am surprised he’s not won at least another one.