World Cup LIVE: Cristiano Ronaldo latest with the forward becoming increasingly isolated despite Portugal reaching the quarter-finals… while England continue their preparation for France on Saturday

Follow Sportsmail’s live blog for all the latest World Cup news and updates, including build-up to England vs France and the fallout after Cristiano Ronaldo’s Portugal strop.

‘Is the Manchester United manager wrong and now is the Portugal manager wrong?’: Cristiano Ronaldo ‘has got to do a LOT better’ with his attitude after being dropped by Fernando Santos, insists Gary Neville

SAM BROOKES AND MATT DAVIES: Gary Neville has called for Cristiano Ronaldo to improve his attitude after the forward was sensationally dropped for Portugal’s last-16 World Cup clash with Switzerland.

The 37-year-old was visibly unhappy after being taken off in Portugal’s final group game against South Korea, and his emotional reaction has led to Fernando Santos leaving him out of his starting line-up, with Goncalo Ramos coming in to replace him.

CHARLOTTE DALY: Ramos was selected ahead of the Portugal captain for Tuesday’s game as Fernando Santos made the decision to drop Ronaldo after he reacted angrily to being substituted against South Korea last Friday.

The 21-year-old made the most of his first international start by scoring three well-taken goals which included a thunderous strike to get off the mark, and a lovely dinked finish to complete his hat-trick.

Meanwhile Portugal boss Fernando Santos has offered a different take to Ronaldo’s sister, suggesting he dropped Ronaldo due to tactical reasons and that there is no feud.

I genuinely believe him – if by tactical reasons he means dropped because he is now no longer the best available.

NATHAN SALT: A Bola hailed their new superstar, who now has more goals in Qatar than Ronaldo managed across three group games, as a ‘demolisher’ following his destructive display against the Swiss.

O Jogo toasted ‘a collective display from another world’ with a team celebration as their front cover image – again, with top story Ronaldo overlooked.

‘It’s a shame to HUMILIATE a man who has given so much’: Cristiano Ronaldo’s sister takes aim at Portugal boss Fernando Santos for starting the 37-year-old on the bench in 6-1 win over Switzerland… branding the decision as a ‘major injustice’

Even Ronaldo’s sister has gotten involved in all of this, and she has accused Portugal of trying to ‘humiliate’ her brother.

Not too sure how accurate she is with that, but all Portugal have to do to justify their stance is to point towards the scoreboard.

And here is the result of dropping Ronaldo from the starting XI in more detail. Check out MARTIN SAMUEL’S match report from a stunning night in Lusail.

Cristiano Ronaldo’s axing from the Portugal starting line-up is still the biggest news around right now, a decision only magnified by his team running out 6-1 winners over Switzerland and his replacement Goncalo Ramos grabbing a hat-trick.

On the outside it was all smiles from the veteran forward, but inside it must have hurt a little.

Imagine being the first name on the team sheet for 18 years and then all of a sudden you are no longer required – and the decision is instantly rewarded. That’s going to sting a little.

At near 38-years-old, it’s also the reminder that Father Time catches up with everyone and must have been going through the former Manchester United star’s head as he trudged off alone separate from his celebrating team-mates last night…

Good morning, all – following a dramatic conclusion to the last-16, it’s time to focus on the quarter-finals of the World Cup where of course England feature when they take on France.

There is also more to bring from the fall-out of Cristiano Ronaldo being dropped by Portugal on what should be a busy day despite this being the first of the tournament where no matches will be played.

Keep up to date with the latest news live right here… 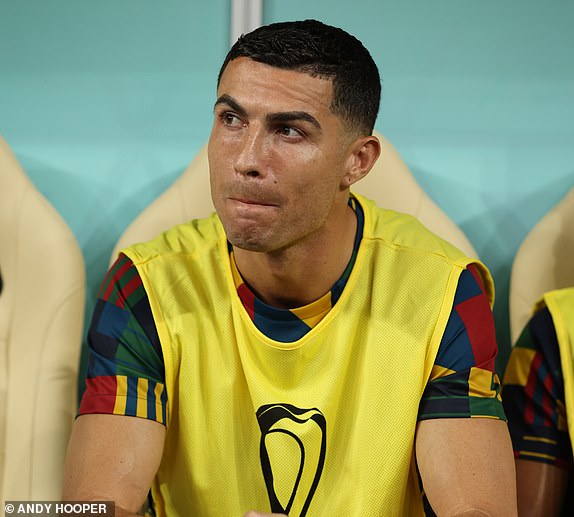