A 25-story apartment building being built in an upscale area of Nigeria’s largest city has collapsed with more than 100 workers feared trapped under the rubble.

The building was in the Ikoyi district of Nigeria’s commercial capital Lagos and fell down on Monday at around 1.30pm.

Construction worker Eric Tetteh, 41, was inside the building.

He said the builders were waiting for an excavator to arrive at the site when the building suddenly crumbled into a heap of debris.

He said: ‘Me and my brother, we escaped, but more people are there, more than 100 people.’

Obafemi Hamzat, deputy governor of Lagos, was met on his arrival at the site by angry youths who accused authorities of failing to immediately launch rescue efforts. 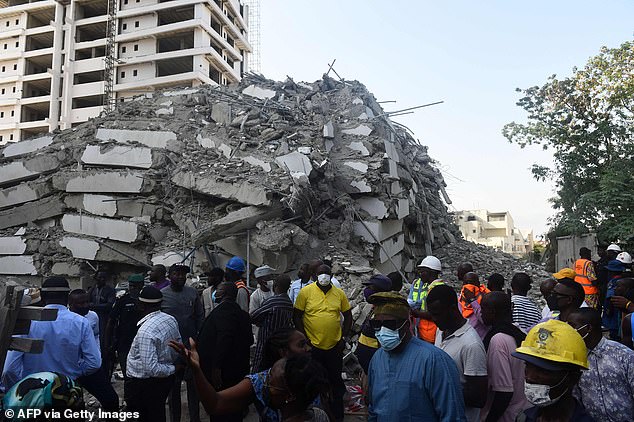 ‘For the past two hours since it collapsed nobody came here,’ one angry worker shouted towards him.

Workers said the high rise, which collapsed in the Ikoyi area of Lagos, had been under construction for about two years.

It was not immediately known what caused the collapse.

However, such incidents are relatively common in Lagos because enforcement of building code regulations is weak.

Other observers blamed shoddy work by private developers eager to meet demand for housing in the megacity.

He said: ‘It is a 25-storey building still under construction.

‘Many workers are trapped under the rubble.

‘We are trying to rescue them.

‘We cannot say at this moment how many are dead.

‘The rescue operation is ongoing.’

Workers at the site, some covered in dust, said dozens of their colleagues could have been inside when the building collapsed.

One of them, Latif Shittu, said: ‘I feel so bad because the people that are inside they have family.’

Ikoyi is one of the more wealthy residential and business districts in Lagos, the major commercial city of Africa’s most populous nation.

No earth-moving equipment has arrived yet at the scene.