$500m tycoon Tony Hsieh feared he was turning into a CRYSTAL

$500m tech tycoon Tony Hsieh feared he was turning into a CRYSTAL, wanted to open theme park where visitors could pay with sea shells and blew $30m on plans for an ice castle weeks before dying in propane fire while doing 50 whippets a day

A tragic tech CEO feared he was turning into a crystal, announced plans to open a theme park where visitors could pay with sea shells and blew $30 million on plans for an ice castle in the weeks leading up to his drug-addled death in a fire.

Hsieh, who created online retailer Zappos, and later sold it to Amazon, died in a fire inside a storage room at his girlfriend Rachel Brown’s Connecticut mansion in November 2020. He was just 46 years old.

And now it has been revealed he was consuming up to 50 canisters of nitrous oxide – also known as whippets – a day.

The substance is commonly used in medicine as an anesthetic, but can also be used to get high. Hsieh is also known to have taken horse tranquilizer ketamine in the run-up to his death.

Hsieh was found unconscious inside a storage shed beside his girlfriend’s home in Connecticut in November 2020. He had argued with Rachael Brown and gone to the shed to sleep – taking a propane heater, blankets and whippets with him. That combination had triggered a fire, with Hsieh dying in hospital from smoke inhalation nine days later.

Hsieh left no will instructing how his fortune – estimated by The Wall Street Journal to sit at $500 million – should be distributed. His family and business associates are currently battling for access to his cash in court.

On Wednesday, court documents in the fight over his estate revealed his addled state of mind – with $30 million spent on plans to build an ice castle and boat bar, and hallucinations aggravated by a ketamine habit worsening with ‘whippets’.

Hsieh also owed $250 million to creditors at the time of his death, but despite that debt still appears to have left a huge fortune behind. 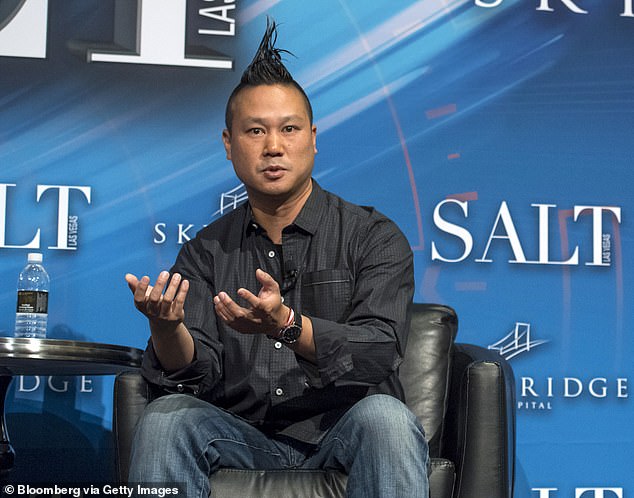 Tony Hsieh died in November 2020, aged 46 – leaving behind a $500 million fortune and no will. His family and business associates are now arguing in court over accessing the funds 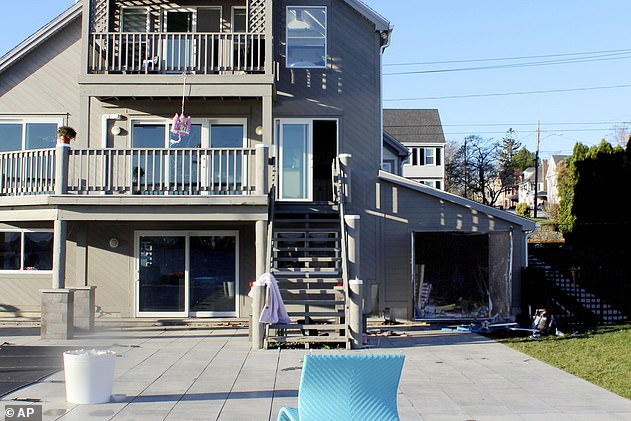 Hsieh, who had amassed vast wealth selling shoe company Zappos to Amazon in a $1.2billion deal, died last November after barricading himself in a pool shed in New London, Connecticut (on the right) which later went up in flames 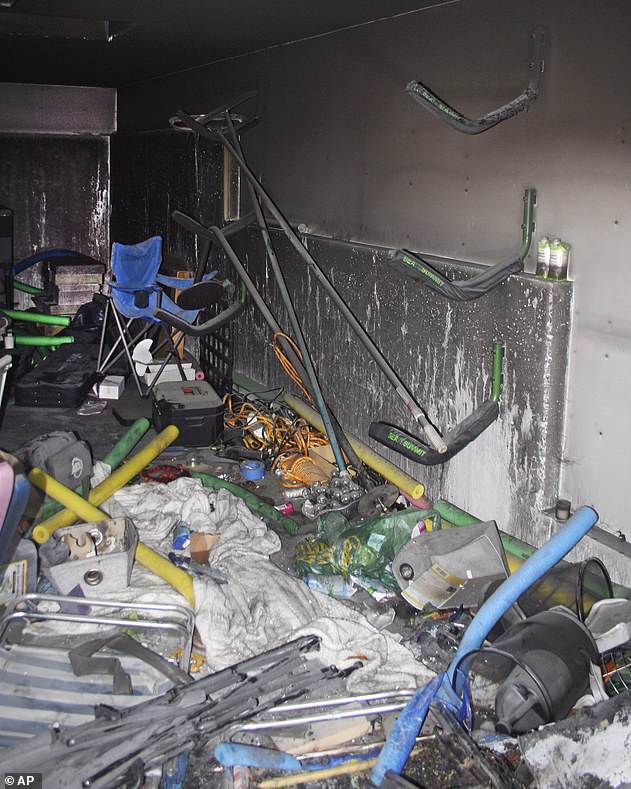 A report by the fire marshal found that Hsieh had lit candles, a propane heater, whippet nitrous oxide chargers, whip cream dispenser, a marijuana pipe, and bottles of alcohol with him at the time of the blaze

The month before his death, the Taiwanese-American millionaire ‘was taken to the emergency room after stating that he believed that he was ‘crystalizing,’ that he believed he was in a simulation, that he had been chewing cigarettes, and professing, ‘I just don’t know what’s real and what’s not,’ lawyers wrote in court documents obtained by Las Vegas outlet 8 News Now.

Hsieh moved Zappos’ headquarters to Las Vegas and was instrumental in revitalizing the city’s downtown area.

Lawyers for Hsieh’s estate, in the Vegas court fight, have argued that he did not have the mental capacity to sign off on deals and agreements leading up to his death.

They cited as an example his plans for a theme park where sea shells would be used instead of cash.

The lawyers noted that in the year leading up to his death, Hsieh became drawn to drugs – first ketamine, which in high doses can lead to hallucinations, and then nitrous oxide.

The lawyers for the estate argue that Hsieh was not in his right mind – noting he signed a $30 million contract for a man to ‘operate a boat bar and ice castle’.

He also bought the Zappos headquarters ‘for nearly $40 million more than its value.’

Tony Lee, Hsieh’s financial manager who is suing the estate for $7 million, has claimed in court documents that Hsieh’s brother Andy supplied him with drugs – denying that he himself was responsible for the tycoon’s decline. 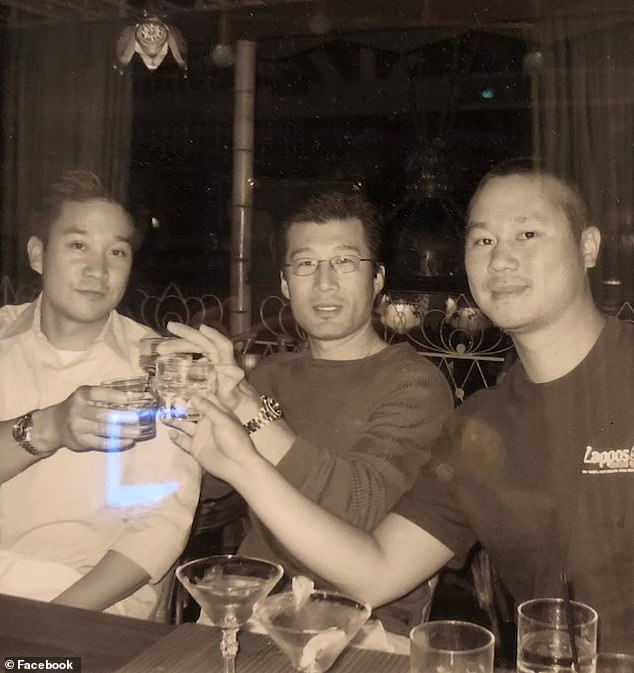 Andrew Hsieh (far left), the brother of late Zappos CEO Tony Hsieh (far right), has been accused of taking advantage of his troubled sibling to ‘enrich himself’ and supplying him with drugs as he spiraled into addiction, in a motion filed by financial manager Tony Lee (center) 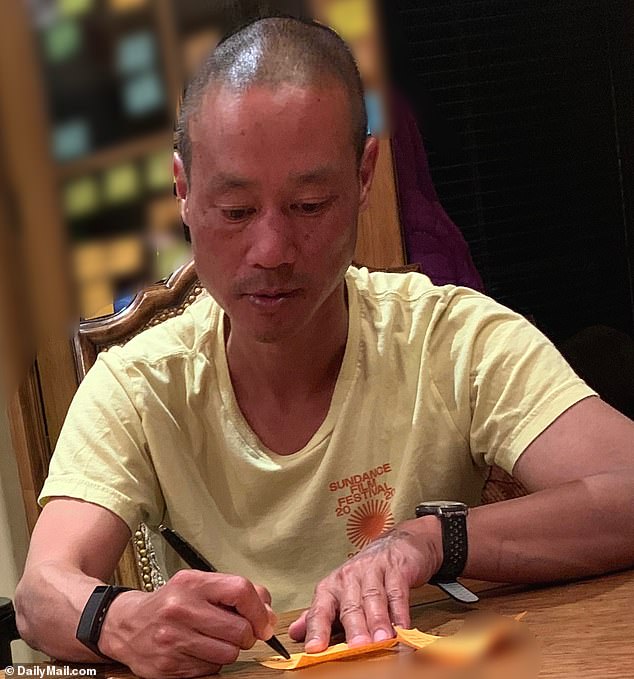 The family’s legal filing described how Hsieh’s living conditions became increasingly hellish as he spiraled mentally and physically. He is pictured above in June 2020

‘The evidence in this case is going to show that Andy, not Lee or the Estate’s other cast of scapegoats, engaged in much of the despicable conduct he and the Estate accuse Lee of in the Estate’s pleading,’ Lee’s lawyers wrote in their court documents.

‘As an illustration, it was Andy that arranged for the purchase of thousands of canisters of nitrous oxide at an alarming rate for Tony Hsieh’s continued use when others who cared for Mr. Hsieh refused to do so.

‘It was Andy that plied Tony Hsieh with alcohol during Mr. Hsieh’s final months (despite knowing that Mr. Hsieh suffered from cirrhosis).

‘And, it was Andy who, on multiple occasions, relentlessly tried to enrich himself financially by even asking the manager of Pelagic to divert millions of dollars from Tony Hsieh’s holdings to Andy himself.’

Wednesday’s court documents provided more detail of Hsieh’s addictions, with friends saying Hsieh used ‘as many as 50 cartridges of nitrous oxide a day, often in public, or during ‘meetings’ with people.’

The new documents also deny that Andy Hsieh was encouraging his brother’s drug use – instead insisting that he was weaning him off the substances.

‘Andy Hsieh stepped into the role of supplying nitrous oxide to his brother as a means of monitoring and limiting the amount over time that his brother consumed,’ the court documents said.

‘Andy Hsieh also worked with and coordinated security to perform drug sweeps of the house and buses whenever traveling and to dispose of drugs.

‘For example, on Tony Hsieh’s first trip to Connecticut, Andy Hsieh and the security team discovered one of the travelers was supplying Tony Hsieh with drugs so that person was escorted off the bus.’