Having a snowblast! Adorable rare polar bear triplets cuddle and clamber over their mom during playtime in the snow

Exuberant and adorable polar bear cubs have been snapped playing in the snow with their mothers in a series of breathtaking new images.

The cute cubs can be seen clambering all over their mothers as they frolic together in the snow, while other cubs snuggled up into their mom’s warm fur coat as she lay down to rest.

Isabel took the incredible images at various locations around the Arctic circle, including Wapusk National Park and Baffin Island in Canada, as well as the Norwegian archipelago of Svalbard, but did not specify where each image was taken.

She even managed to capture a family of what appear to be triplets – a rare occurrence as most polar bear litters typically feature one or two cubs.

‘The polar bear is one of my favorite animals,’ said Isabel.

‘When I saw the rare triplets, I couldn’t believe my luck. They were just playing with their mother.

‘I learned where I might find a mum and her cubs leaving their dens, so I got myself a warm coat, some solid boots, and went up there in the Arctic climate.’ 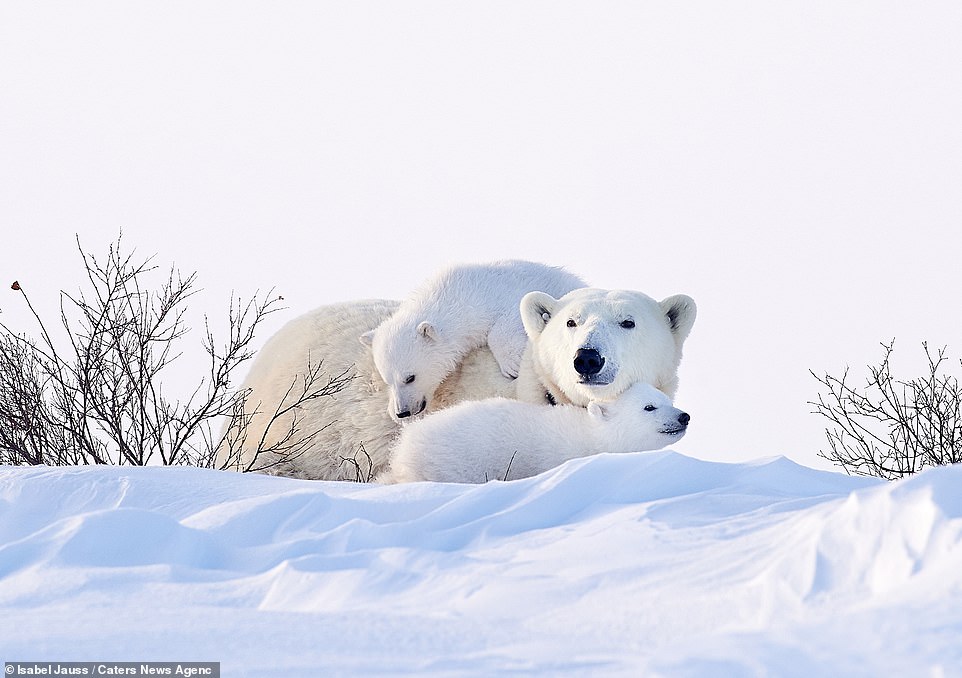 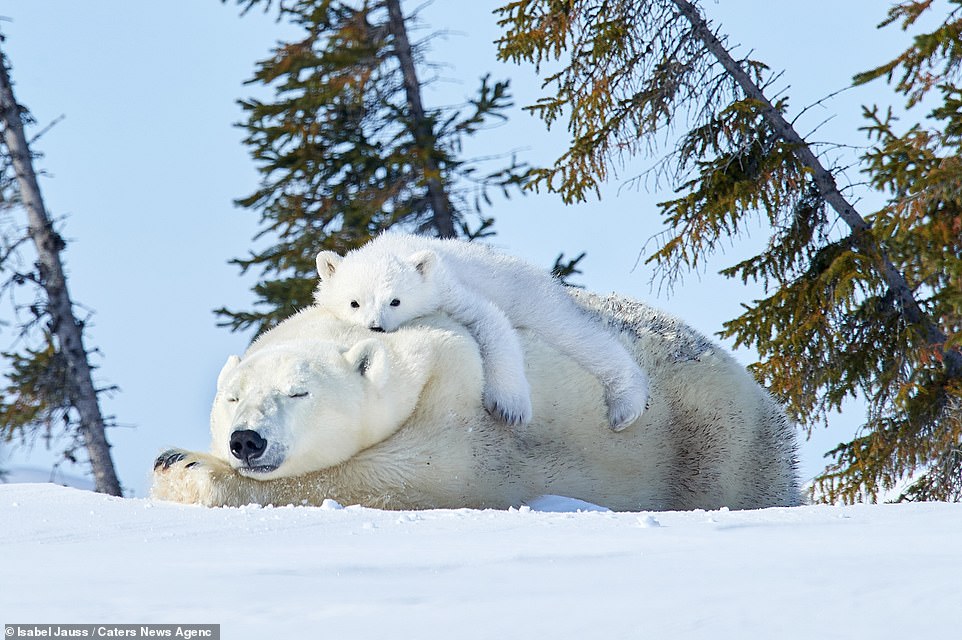 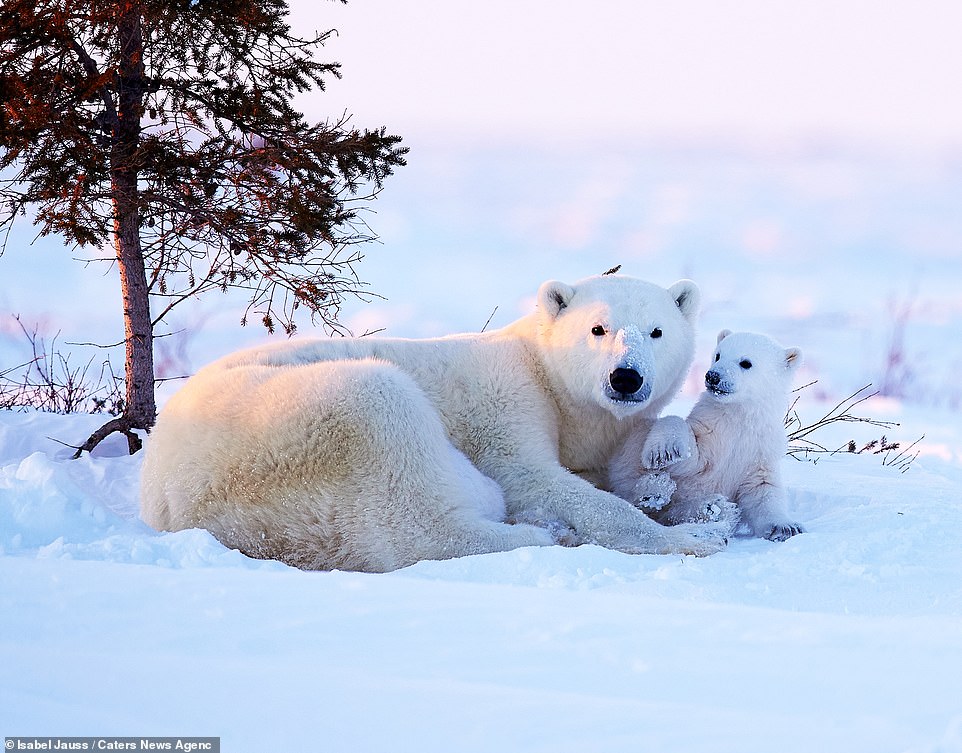 The stunning images were captured by wildlife photographer Isabel Jauss, from Hamburg, Germany, who travelled around the Arctic circle searching for the amazing beasts (isaphotography.com/@isawildlife) 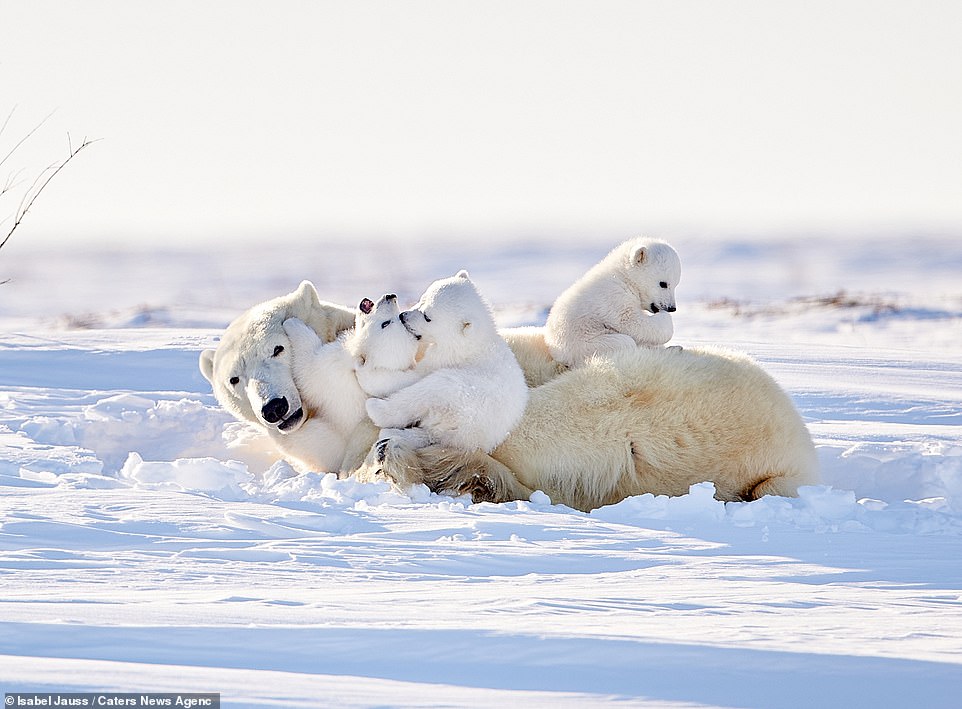 Isabel also managed to capture a family of what appear to be triplets – a rare occurrence as most polar bear litters typically feature one or two cubs. One of the cubs can be seen playfully biting the ear of their sibling

Like other predators at the top of the food chain, polar bears have a low reproductive rate. One or two cubs are born in midwinter and stay with their mother for two years.

Consequently, females breed only every three years, and the bears don’t reproduce until they are five or six years old.

Isabel’s shots of each polar bear family are stunning – but her snaps of polar bear triplets are particularly impressive given how rare it is for a mother to give birth to three babies at once.

Majestic, increasingly hungry and at risk of disappearing, the polar bear is dependent on something melting away on our warming planet: sea ice.

In the harsh and unforgiving Arctic, where frigid cold is not just a way of life but a necessity, the polar bear stands out.

But where it lives, where it hunts, where it eats – it’s disappearing underfoot during the summertime. 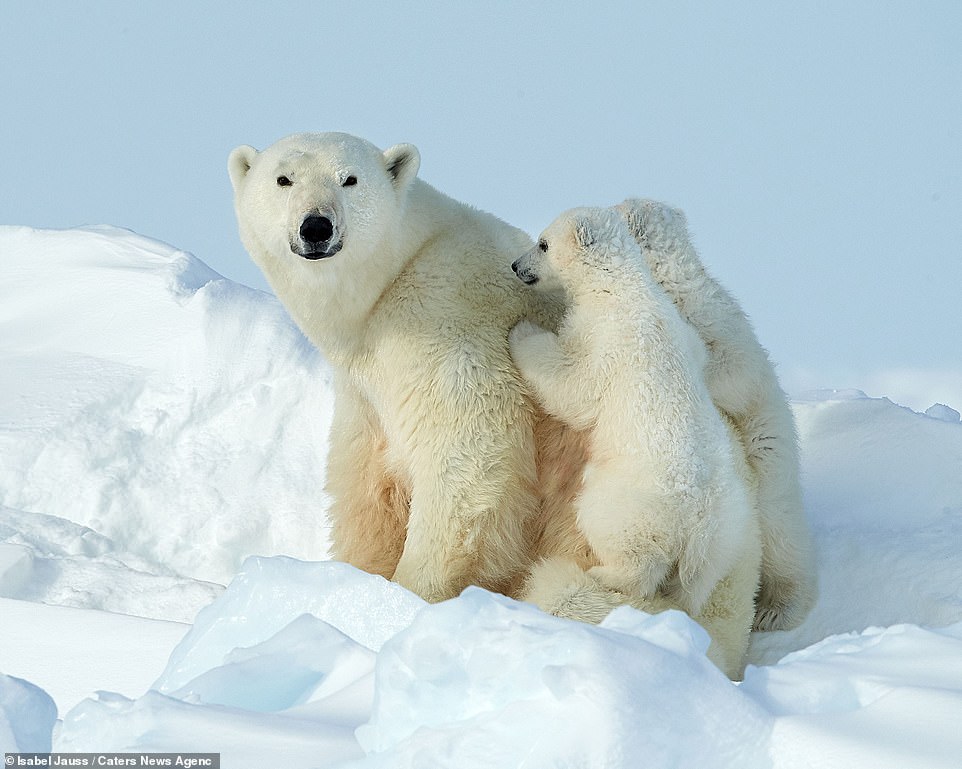 ‘The polar bear is one of my favorite animals,’ said Isabel, who trekked around Canada and the Norwegian archipelago of Svalbard in pursuit of the stunning animals 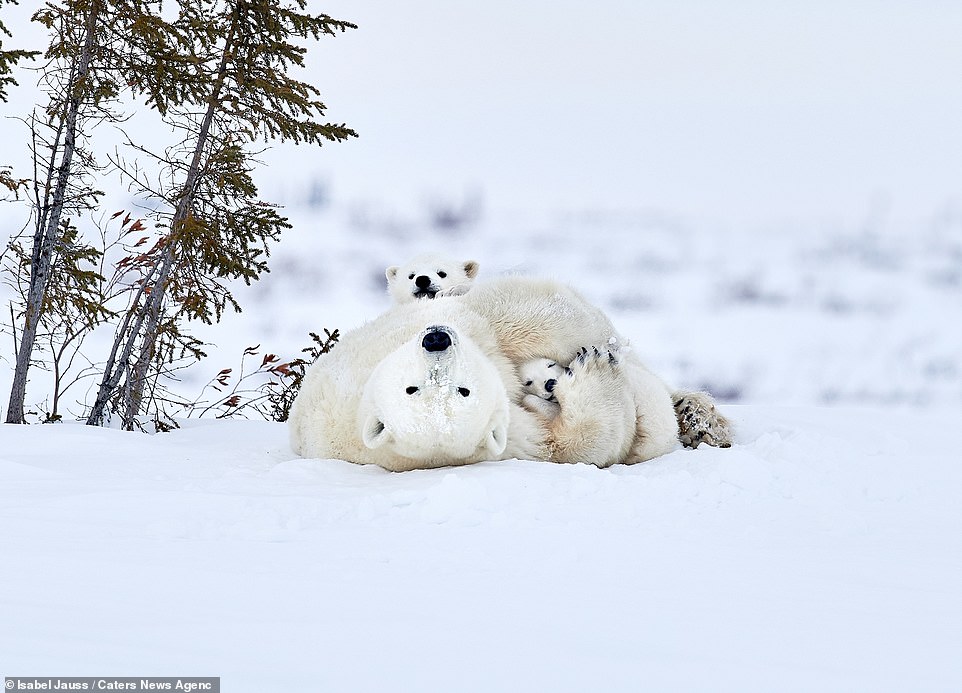 A polar bear mom wraps one of her cubs in a tight, snuggly embrace while the other fluffball peeks at the camera over her belly 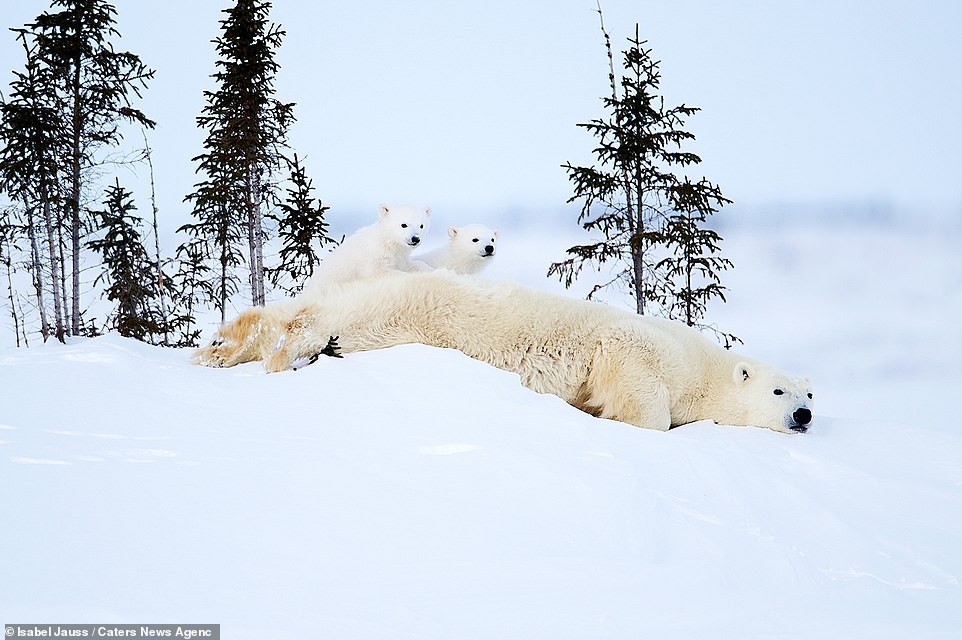 Two adorable polar bear cubs copy their mother as the bears look out on their habitat from a snowy peak. The loss of Arctic ice in the summertime due to climate change is causing polar bears to struggle to find food

Scientists and advocates point to polar bears, marked as ‘threatened’ on the endangered species list, as the white-hot warning signal for the rest of the planet – ‘the canary in the cryosphere.’

Twila Moon, a National Snow and Ice Data Center scientist, said: ‘It’s near impossible for us to see a place where we don´t reach an essentially sea ice-free Arctic, even if we´re able to do the work to create much, much lower emissions’ of heat-trapping gases.’

‘Sea ice is one of those things that we´ll see reach some pretty devastating lows along that path. And we can already see those influences for polar bears.’ 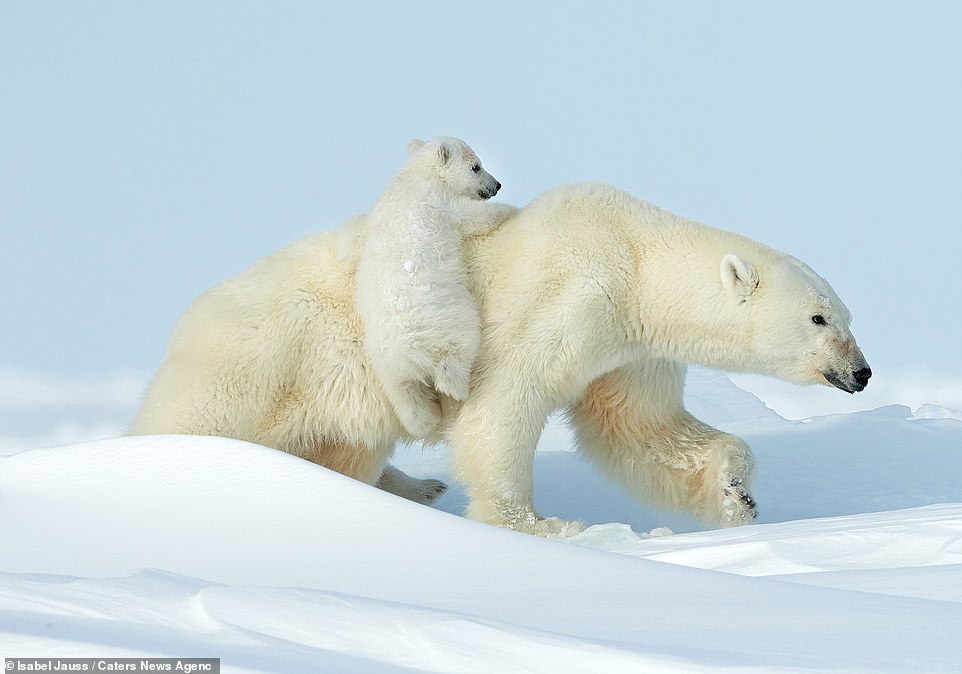 In the harsh and unforgiving Arctic, where frigid cold is not just a way of life but a necessity, the polar bear is an incredible predator. But the Arctic ice that is their home and hunting ground is disappearing underfoot during recent summers amid global warming 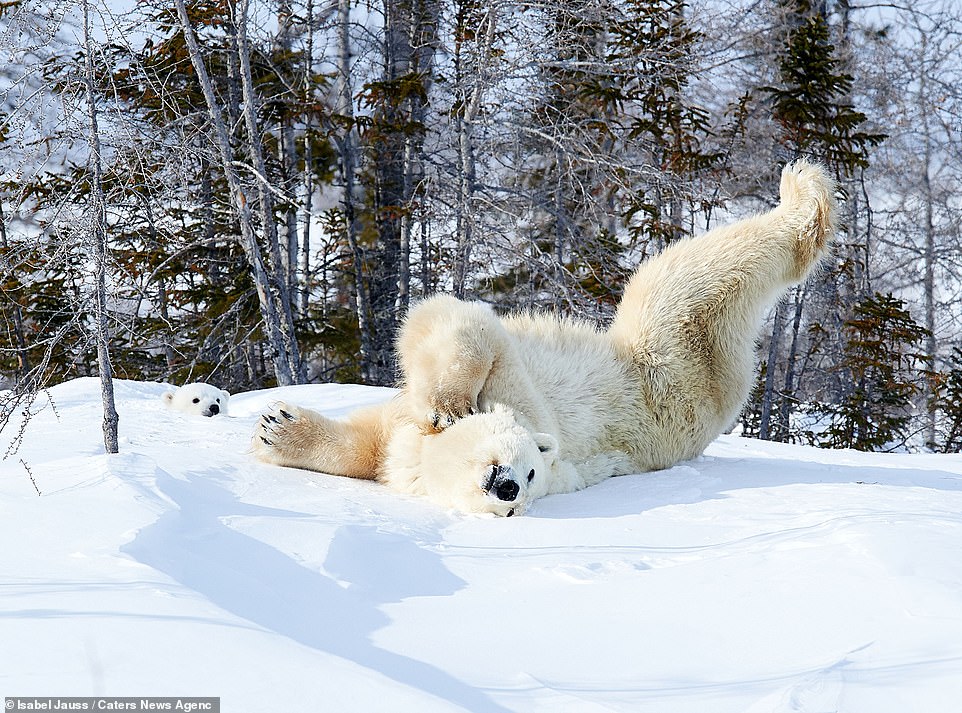 Freedom! A polar bear mom manages to extricate herself from her babies just for a moment and takes the opportunity for a stretch and a roll in the snow as one of her cubs looks on 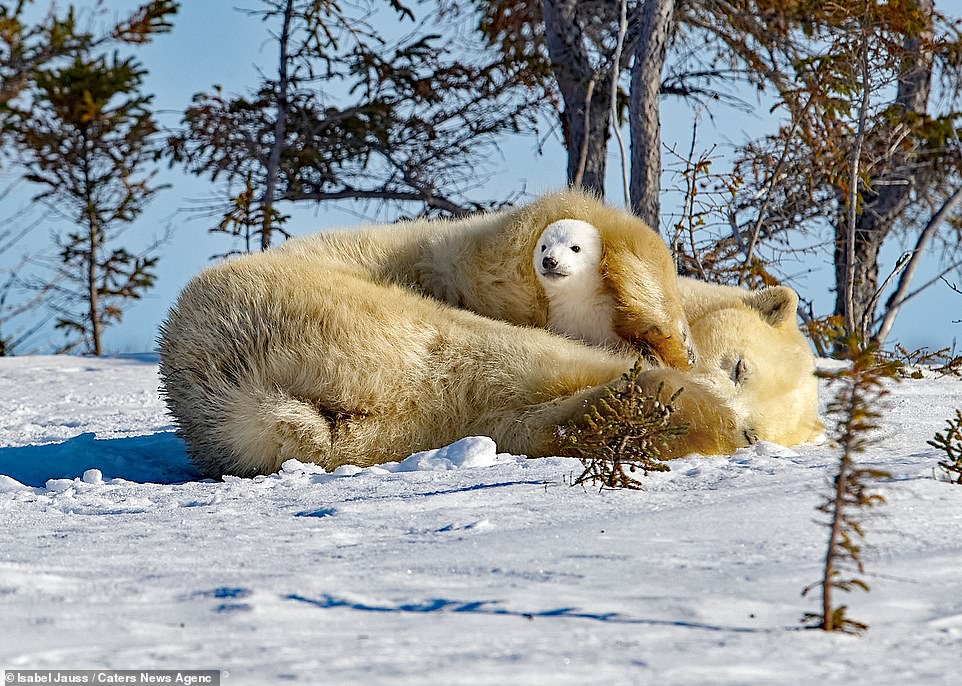 Like other predators at the top of the food chain, polar bears have a low reproductive rate. One or two cubs are usually born in each mother’s litter, and stay with her for two years. The bears don’t reproduce until they are five or six years old.

WHY DO POLAR BEARS NEED ICE TO SURVIVE?

Loss of ice due to climate change has a direct impact on the ability of polar bears to feed and survive.

The bears need platforms of ice to reach their prey of ringed and bearded seals. Some sea ice lies over more productive hunting areas than others.

But the Arctic has been warming twice as fast as the rest of the world. In some seasons, it has warmed three times faster than the rest of the globe, said University of Alaska at Fairbanks scientist John Walsh.

In the summertime, polar bears go out on the ice to hunt and eat, feasting and putting on weight to sustain them through the winter. They prefer areas that are more than half covered with ice because it´s the most productive hunting and feeding grounds.

From late fall until spring, mothers with new cubs den in snowdrifts on land or on pack ice. They emerge from their dens, with the new cubs, in the spring to hunt seals from floating sea ice.

Simply put, if there isn’t enough sea ice, seals can’t haul out on the ice and polar bears can’t continue to hunt.

In recent years the sea ice has retreated so far offshore that the bears have been forced to drift on the ice into deep waters – sometimes nearly a mile deep – that are devoid of their prey.