Afghanistan’s last member of the Jewish community, a man who was born in the country and considered it his home, has finally left following the Taliban’s takeover last month.

Zebulon Simentov, 62, lived in a dilapidated synagogue in Kabul, kept kosher and prayed in Hebrew, while enduring decades of war as the country’s centuries-old Jewish community dwindled. 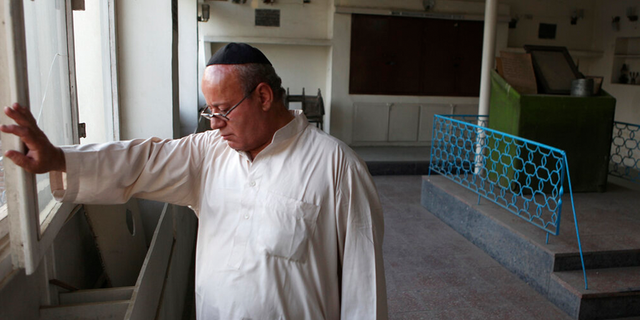 FILE: Zebulon Simentov, the last known Jew living in Afghanistan, closes the window to the synagogue he cares for in his Kabul home.
(AP)

Moti Kahana, an Israeli-American businessman who runs a private security group that organized the evacuation, told The Associated Press Simentov had lived under Taliban rule before and was not worried about them.

But Kahana said he warned Simentov that he was at risk of being killed by the far more radical ISIS group who is responsible for last month’s terrorist attack at Kabul’s airport that killed 13 U.S. service members and 169 Afghans.

Kahana said Simentov’s neighbors also pressed him to leave so that their children could join him on the bus out.

Kahana said that Simentov and 29 of his neighbors – nearly all of them women and children – have been taken to a “neighboring country.” They have joined an exodus of tens of thousands of Afghans who have fled since the Taliban retook the country.

Kahana said his private security group is reaching out to U.S. and Israeli authorities to find a permanent home for Simentov, whose estranged wife and children live in Israel.

Born in the western city of Herat in 1959, Simentov always insisted Afghanistan was home. Reporters who visited him over the years found a portly man fond of whiskey, who kept a pet partridge and watched Afghan TV. He observed Jewish dietary restrictions and ran a kebab shop.

The U.S. and its allies organized a massive airlift in the closing days of the 20-year-war, but officials acknowledged that up to 200 American citizens, as well as thousands of Afghans who had aided the war effort, were left behind.

Hebrew manuscripts found in caves in northern Afghanistan indicate a thriving Jewish community existed there at least 1,000 years ago. In the late 19th century, Afghanistan was home to some 40,000 Jews. But the community’s decline began with an exodus to Israel after its creation in 1948.

The Taliban, like other Islamic militant groups, are hostile to Israel but tolerated the country’s minuscule Jewish community during their previous reign from 1996 to 2001.