Home » World News » After 20 years, US declares end of war in Afghanistan

After 20 years, US declares end of war in Afghanistan

Washington: The United States has completed the frantic and deadly withdrawal of its forces from Kabul, marking the official end of the 20-year war in Afghanistan.

General Kenneth McKenzie, who leads the US Central Command, announced on Tuesday (AEST) that the last C-17 American military aircraft had departed the international airport in Kabul.

McKenzie said that more than 122,000 people have been airlifted out of Kabul since August 14, making the effort the biggest non-combatant evacuation in US history.

The evacuation effort began in chaos and become more dangerous over time, culminating in a suicide bomb attack by the IS-K terror group that killed 13 US soldiers and at least 169 Afghans at the airport gate.

“Every single US service-member is now out of Afghanistan,” McKenzie said.

On the remaining American citizens and Afghan allies who have applied for asylum in the US, McKenzie acknowledged: “We did not get everybody out that we wanted to get out.”

He said that he believed the numbers of US citizens remaining in Afghanistan was in the “low hundreds”. 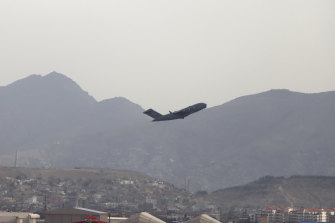 A US military aircraft takes off from the Hamid Karzai International Airport in Kabul, Afghanistan.Credit:AP

“The military phase is over, but our desire to bring these people out remains as intense as it was before,” he said.

“I think if we’d stayed another 10 days, we wouldn’t have gotten everybody out that we wanted to get out and there still would’ve been people who would’ve been disappointed with that. It’s a tough situation.”

The Taliban used Twitter to proclaim the “full independence” after the departure of the final American troops.

Some Taliban soldiers set off celebratory gunfire shots after the last US military plane left the tarmac in Kabul.

Around 1200 people were airlifted from Kabul in the previous 24 hours.

President Joe Biden had set August 31 as the US withdrawal deadline, and that date had passed by an hour in Kabul by the time the Pentagon confirmed the end of the military presence.

IS-K earlier claimed it fired six rockets at Kabul airport in an attack that did not cause any casualties and was partially intercepted by US forces.

Meanwhile, the Pentagon was assessing reports that an earlier drone strike it launched on IS-K militants which resulted in the deaths of up to 10 civilians in Kabul.

“We are not in a position to dispute it right now, we’re assessing and we’re investigating,” the Pentagon’s John Kirby told a news conference earlier on Tuesday.