London: It is the key question puzzling scientists and commentators. How is Britain managing to weather the latest deadly COVID storm while the defences of our European neighbours are crumbling?

Pascal Soriot, the chief executive of AstraZeneca, has now offered a possible answer. He suggested that the durability of T-cells from the Oxford jab could be keeping older people safer than those on the European continent, preventing hospitalisations and deaths, even though cases are still high. 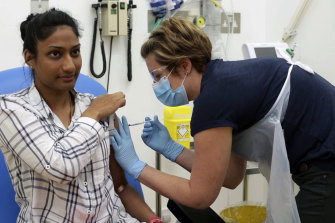 A volunteer is injected as part of a trial of the University of Oxford/AstraZeneca trial back in April 2020.Credit:AP

Several countries including France, Germany, Spain and Belgium, restricted the AstraZeneca vaccine to under-65s in the early stages of their rollouts, claiming there was not enough data to prove it worked for older people.

That might have been an error, Soriot suggests, because data are showing that the AstraZeneca jab offers long-term protection, hinting that the response is more durable than mRNA jabs such as Pfizer and Moderna. The problem is, nobody has seen this data and AstraZeneca could not say when it would be published.

Early data did indeed suggest that AstraZeneca was better at triggering T-cell immunity than Pfizer.

By mid-June, Oxford University researchers had found there was still a robust T-cell response from the AstraZeneca jab at six months even after a single dose, despite big drops in antibody immunity.

Eleanor Riley, professor of immunology and infectious disease at the University of Edinburgh, said: “It seems that the Oxford-AZ vaccine initially induces higher levels of T-cells than the mRNA vaccines.

“These T-cells are important for long-term immune memory and also for inhibiting virus replication and killing infected cells once an infection becomes established.

“Since the AZ vaccine is slightly better at inducing these T-cells, the implication is that it may provide longer term protection against hospitalisation and death. I think this is the point that Dr Soriot was making.” 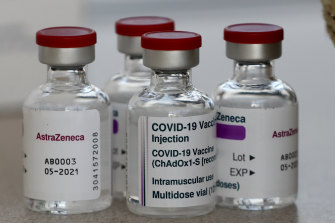 Vials AstraZeneca vaccine ready to be used at the Wellcome Centre in London in February.Credit:AP

In July, scientists from Oxford and Switzerland also suggested that long-term immunity could be greater for adenovirus vaccines like AstraZeneca, because they created “cellular training camps” for T-cells.

However, recent research has shown that in the long term, mRNA vaccines also produce strong T-cell responses, maybe even stronger than AstraZeneca. A paper published yesterday in Nature by University Hospital Tübingen in Germany found that Pfizer produced nearly six times more T-cells than AstraZeneca 18 to 42 days after the second vaccination. Real-world effectiveness data have also consistently shown that the mRNA vaccines are slightly better at preventing infection and serious disease than AstraZeneca, which is inconsistent with claims the Oxford vaccine is providing better protection.

What is more likely is that Britain has had so much infection recently that COVID it is on the brink of becoming an endemic virus. We also got our booster program started earlier with more than 12 million adults now having had a third shot. Latest figures from the Office for National Statistics show that antibody levels are rising again in older age groups after starting to decline in the summer. In Europe, the take-up is much slower.

Whether it does eventually turn out that AstraZeneca affords more long-term protection, it is clear that rolling it out to our most vulnerable has prevented tens of thousands of deaths, and it was remiss of Europe to keep it out of the arms of their pensioners.

There will be myriad reasons why Britain is doing better than Europe. AstraZeneca has certainly played its part.