Biden APOLOGIZES to world leaders at COP26 for Trump pulling out of the Paris climate agreement and putting the U.S. ‘behind the eight ball’

President Joe Biden apologized to his fellow world leaders at the global climate summit COP26 on Monday for Donald Trump taking the United States out of the Paris Climate Accord.

‘I guess I shouldn’t apologize but I do apologize for the fact the United States, in the last administration, pulled us out of the Paris accord and put us sort of behind the eight ball,’ Biden said in a small group meeting with leaders like Boris Johnson, prime minister of the UK.

He also pledged to have America help other countries financially when it came to financing climate change, arguing nations who caused most of the environmental damage should pay more.

‘The United States has an obligation to also step up and finance other countries who have not had the opportunity to do as much damage as we have,’ he said.

‘Those of us who are responsible for much of the deforestation and all of the problems we have so far,’ Biden said, have ‘overwhelming obligations’ to the poorer nations that account for few of the emissions yet are paying a price as the planet has grown hotter. 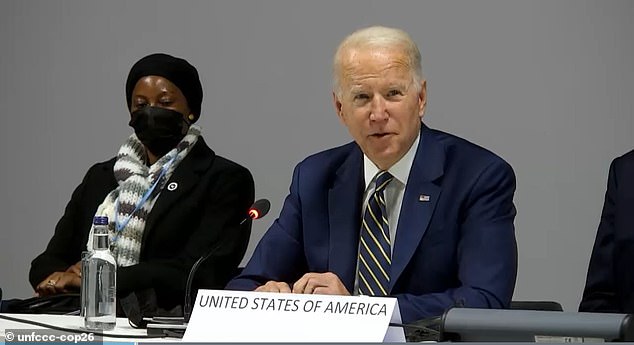 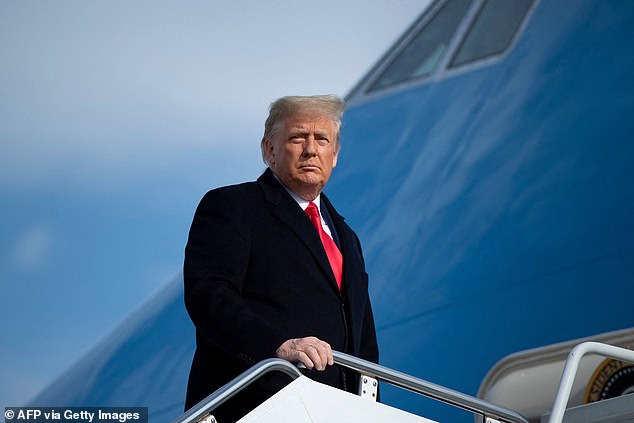 President Donald Trump removed the U.S. from the Paris Climate Accord in June 2017

On his first day as president, Biden signed the papers for the United States to rejoin the Paris Climate Accord after Trump removed the country from the climate agreement in June of 2017.

It was part of a series of actions he took on the environment to combat Trump’s environmental action, which included revmoking a key cross-border presidential permit needed to finish the controversial Keystone XL pipeline – a move that ended the $8 billion pipeline – and creating a climate czar position that is held by John Kerry.

Biden arrived in Scotland on Monday morning on the heels of the G20 summit to meet with his fellow world leaders to discuss ways of reaching the goals outlined in the Paris Climate Accord, including lowering the temperature of the planet by 1.5 degrees.

In a change of tone from his predecessor in the Oval Office, Biden acknowledged that the U.S. bore much of the responsibility for climate change. Trump denied climate change existed.

Biden, ahead of COP26, he touted the power of America ‘showing up.’

‘What we’ve seen again here in Rome is what I think is the power of America showing up and working with our allies and partners to make progress in issues that matter to all of us,’ he said, adding that allies wanted ‘American leadership’ to get things done.

He claimed other leaders sought him out as he fended off a question about whether he could provide leadership amid falling poll numbers at home.

‘The United States of America is the most critical part of this entire agenda, and we did it,’ Biden said.

However, skeptics say few concrete measures were agreed on how to keep the world to temperature rises of less than 1.5 C above pre-industrial levels – a target set at the Paris climate summit in 2015.

And Biden lost key clean energy pledges from his Build Back Better agenda in recent weeks as the price for winning over opponents in his own party to its huge $3.5 trillion cost.

The Supreme Court could yet strip his administration of more powers to limit emissions. 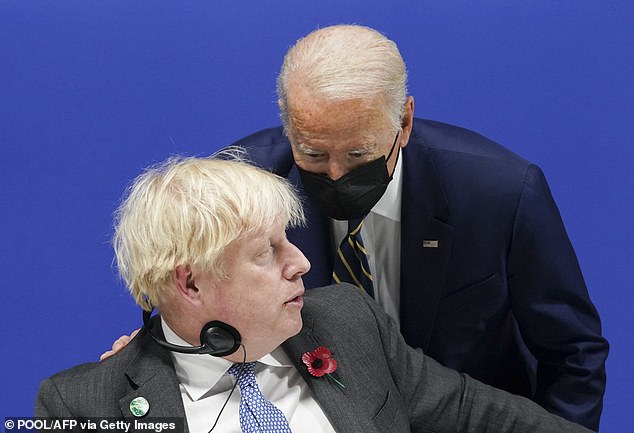 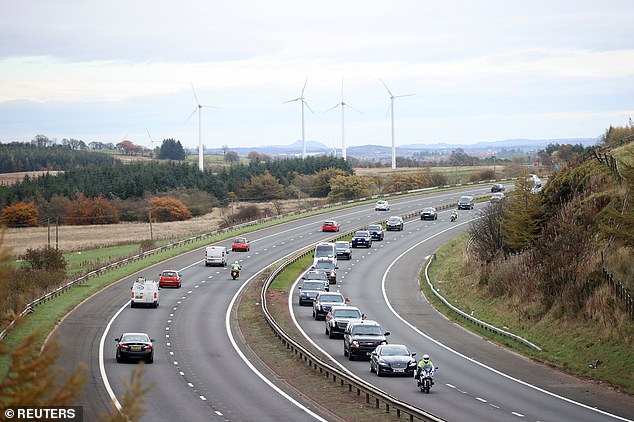 Then there is the awkward matter of his travel arrangements.

His trip to Europe is estimated to release 2.2 million pounds of carbon.

The gigantic carbon footprint is comprised of 2.16 million pounds of carbon dioxide generated by the four large planes that comprise his airborne entourage on the trip to Italy and Scotland, where the president will speak at the COP26 summit on change in Glasgow, with the remainder emitted by Biden’s cars.

His fleet is comprised of the heavily modified Boeing 747 he travels on, known as Air Force One when the president is on board, an identical decoy, and two huge C-17 Globemaster planes to carry his battalion of cars and helicopters.

Even so, his officials frequently talked up the power of US leadership before the summit.

‘The US is stepping up to do its part key,’ said Jake Sullivan aboard Air Force One en route to Edinburgh on Monday morning.

‘US allies Japan, Korea, the European Union, Canada, others are stepping up to do their part.

‘And now the question is: Will some of the remaining countries step up to do theirs?’

Biden’s climate adviser Gina McCarthy echoed the sentiment in a briefing with reporters.

‘This is a message you’re going to see from the president over the next two days and from dozens of cabinet officials who will be in Glasgow over the next two weeks: the United States is back at the table, we’re back, hoping to rally the world to tackle the climate crisis,’ he said.

‘It illustrates how, within three decades, the U.S. can meet our global climate commitments by decarbonizing the power sector, electrifying transportation and buildings, transforming industry, reducing non-CO2 emissions, and reinvigorating our natural lands,’ she said.