The chief executive of of Europe’s second largest shipping port has said Brexit trade disruption has been ‘better than expected’.

Jacques Vandermeiren, head of the Port of Antwerp, said UK trade increased by six per cent last year – with months ‘where you don’t see any trouble at all’.

British businesses attempting to export their goods to the EU have faced a string of headaches since Britain’s exit from the trading bloc.

Companies have bemoaned torrents of extra paperwork, increased costs and repeated rejected deliveries as they have attempted to reach European customers.

But Mr Vandermeiren told The Telegraph: ‘For the United Kingdom, it’s better than what we expected… We expected much more trouble in the port.

‘From time to time we see the traffic jams in Dover. The shortage of truckers and the difficulties when it comes to customer and border control. This is from time to time heavy.

‘But then you have months where you don’t see any trouble at all.’ 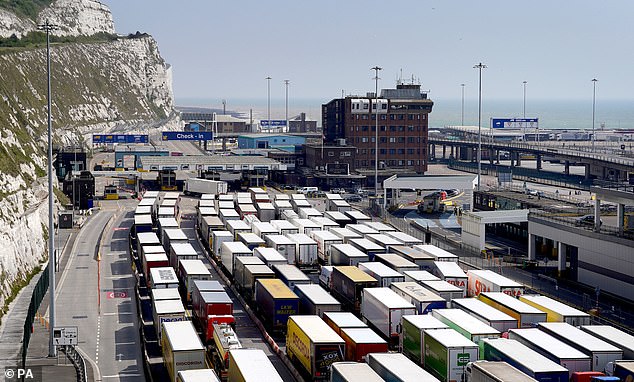 The Port of Antwerp and Zeebrugge were given the green light to merge in January – allowing the two to more efficiently manage peak times of year.

However, Mr Vandermeiren warned that the impact of UK government plans to enforce ferry operators operating in British waters to pay the national minimum wae, in the wake of the P&O mass sacking of staff, is already beginning to show.

It has led to companies sending UK-bound goods to Irish ports, with Ireland becoming ‘a bigger and more important destination’.

He also cited concern over the closure of Shanghai port due to Covid restrictions.

The city – which is home to the world’s largest container port – has now been in strict lockdown since late March, causing huge backlogs to build up with hundreds of cargo vessels stranded offshore.

Mr Vandermeiren said global supply chains will be ‘disturbed’ and there will likely be ‘an increase in prices for shipping containers’.

His comments on UK trade comes as Portugal has become the first EU country since Brexit to allow visitors from Britain to be fast-tracked through electronic passport gates.

The move to treat British arrivals the same as Europeans could spark ‘a domino effect’ reducing border waiting times at other holiday hotspots, an expert said.

It is seen as a bid to lure Britons away from rival destinations such as Spain , Italy and Greece as travel booms after Covid.