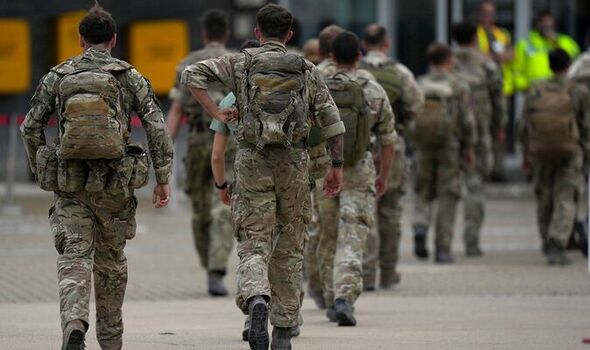 Major General James Martin, who would lead Britain’s main battle force in the event of a war involving NATO, said British forces cannot assume “we have control of air space anymore”. And unlike previous conflicts in Iraq and Afghanistan, they can no longer “assume superiority” in a war, meaning “we will have limited windows of opportunities to do what we want to do”.

“This is the difference between fighting a peer adversary vs fighting a counter-insurgency”, Major General Martin, the commander of Britain’s 3 Division said.

And British commanders training in Germany told how they are devoting more time to avoid detection from drones amid fears they are changing the way air forces seek to gain control of the skies.

Military chiefs admitted they are learning from both Ukraine’s counter-offensive in Kharkiv and Russia’s use of unmanned aerial vehicles and artillery.

They say they want to operate in smaller, nimble groups on the battlefield to make themselves harder to detect and hit with shelling or long-range precision strikes.

Major General James Martin, speaking ahead of the biggest war games on European soil in a decade, said the key to defending Europe would be maintaining the “tempo” of attacks on the enemy, adding “hiding in plain sight… is even more important now”.

And he said the West can deter adversaries by showing Nato is “ready to fight”.

He added: “All we can do is make sure that the warfighting division is ready for any crisis in any eventuality against known adversaries and opponents and those unknown in the future.

“I think the British taxpayer expects us to be ready to war fight at a moment’s notice.

“That keeps my job pretty simple.

“I think a demonstrable UK will to use military force on the continent of Europe is one of the critical outputs of Exercise Cerberus.”

Brigadier Nick Cowley, commander of 16 Air Assault Brigade, said “the biggest change of warfare in Ukraine is the prevalence of mini-drones and tactical UAVs.”

And Major General James Martin said: “Even if you went back to the Cold War, Nato always assumed it was going to be outnumbered, out-ranged.

“In some cases, facing better technology. That was always the case.

“We don’t assume we have control of air space anymore.

“We don’t assume we have air superiority or supremacy as we have done in the middle east.

“We now assume that we will have limited windows of opportunities to do what we want to do. That’s the difference between fighting a peer adversary vs fighting a counter-insurgency.”

“We are absolutely demonstrating to our opponents and our allies and partners that we are ready to fight.

“To the former that we have both the will and capability to fight and to the latter that we are committed and in solidarity with them.”

He also said the point of doing this exercise in Germany was that it’s “vital to have troops in Europe” – again, sending a message to adversaries.

“If you look at the conflict in Ukraine at the moment, whether it’s a valuable target, emitting in a way that looks like it’s an important command and control post, or a high-value capability such as rocket system becomes vulnerable to fires, so trying to reduce your size, reduce your emissions – looking different is crucial to surviving on the battlefield.

“We expect our opponent is going to outnumber us, in some cases out range us, certainly have more material than us.

“It’s exactly what the Ukrainians are seeing at the moment.

“But by converging your combined arms effect, all those different parts of your force and multi-domain effects so it’s not just about the land, it’s about the air, cyber, space, that can give you a decisive advantage and those windows of opportunity are fleeting, but when you take them and if you get them right then you can overcome a superior opponent.”

Major General Martin said NATO allies must be “ready to fight” to deter Russia – or any other adversary – from attacking another European nation.

He said: “My belief is that in order to deter an opponent you have to be willing and demonstrably able to have that fight.

“So by acting in a way that makes us ready for that fight, we also believe that that is an active and credible deterrent.

“For me, the ability to war fight also leads to that deterrence that hopefully prevents you from having to war fight.

“But there are no half measures. I don’t think you can deter by aiming to deter.

“I think you can deter by aiming to be ready to fight. I think that’s the history of warfare forever. It doesn’t concern me because it’s just reality. Hope for peace but prepare for war is the way that one should approach this.”

Speaking ahead of the biggest wargames exercise in Europe in 10 years, senior British Army chiefs involved in the training all warned of the growing threat of drones.

Operation Cerberus, in Sennelager, Germany, is using a computer simulator to test commanders on their decision-making and tactical nous.

They will feed information through the chain of command, which will then be entered into a computer programme to create new dynamics in a virtual battlefield.

To make it more realistic, troops were deployed across the training base in tents and inside armoured vehicles to mimic a real war.

If they stayed in one location for too long, they would be more vulnerable to artillery strikes.

And British commanders say this is one of the main lessons that they have learnt from the conflict in Ukraine – that they need to find ways to move even quicker and to be able to strike even harder from multiple locations.

With the threat of drones growing, from kamikaze to surveillance UAVs, Major General Martin stressed that the British Army must be even more disciplined when hiding tanks and artillery and limiting radio transmissions.

Brigadier Nick Cowley, commander of 16 Air Assault Brigade, said: “We are doing a lot of learning from Ukraine.

“We are going to be using some new tactical procedures to keep our emissions down, as in radio conversations so that our electronic footprint and our physical footprint will be as small as possible.

“In some ways that’s not new, that the less you use, the smaller your headquarters is, the longer you’ll survive.

“We’ve found some buildings, we’ve hidden ourselves in the buildings, all our antennas are miles away so that even if they do pick up on the radio signal they are going to hit the artillery in the wrong place.

“What we are finding in Ukraine is once you are sending a lot of signals then the enemy start closing in on your location.”

What is happening where you live? Find out by adding your postcode or visit InYourArea

“More deception, more movement, smaller headquarters, more use of buildings for opportunities to try tuck yourself away, so that if they put a mini drone over the top, there’s no military equipment that you can see.

“Probably the biggest change of warfare in Ukraine is the prevalence of mini drones and tactical UAVs so you need to make sure that your HQ, if someone flies one over the top, you look like a normal building in a village or town.

“We have seen the trend coming for quite a long time.

“I think the urgency to accelerate our procurement of drones and our ability to hide and mask ourselves from drones is becoming more and more urgent as we see their prevalence go up and up.”