Vaccines have been given to people in England to prevent further cases of monkeypox.

It comes after health chiefs last week confirmed two cases of the rare virus – only the fifth and sixth ever to be found in the UK. 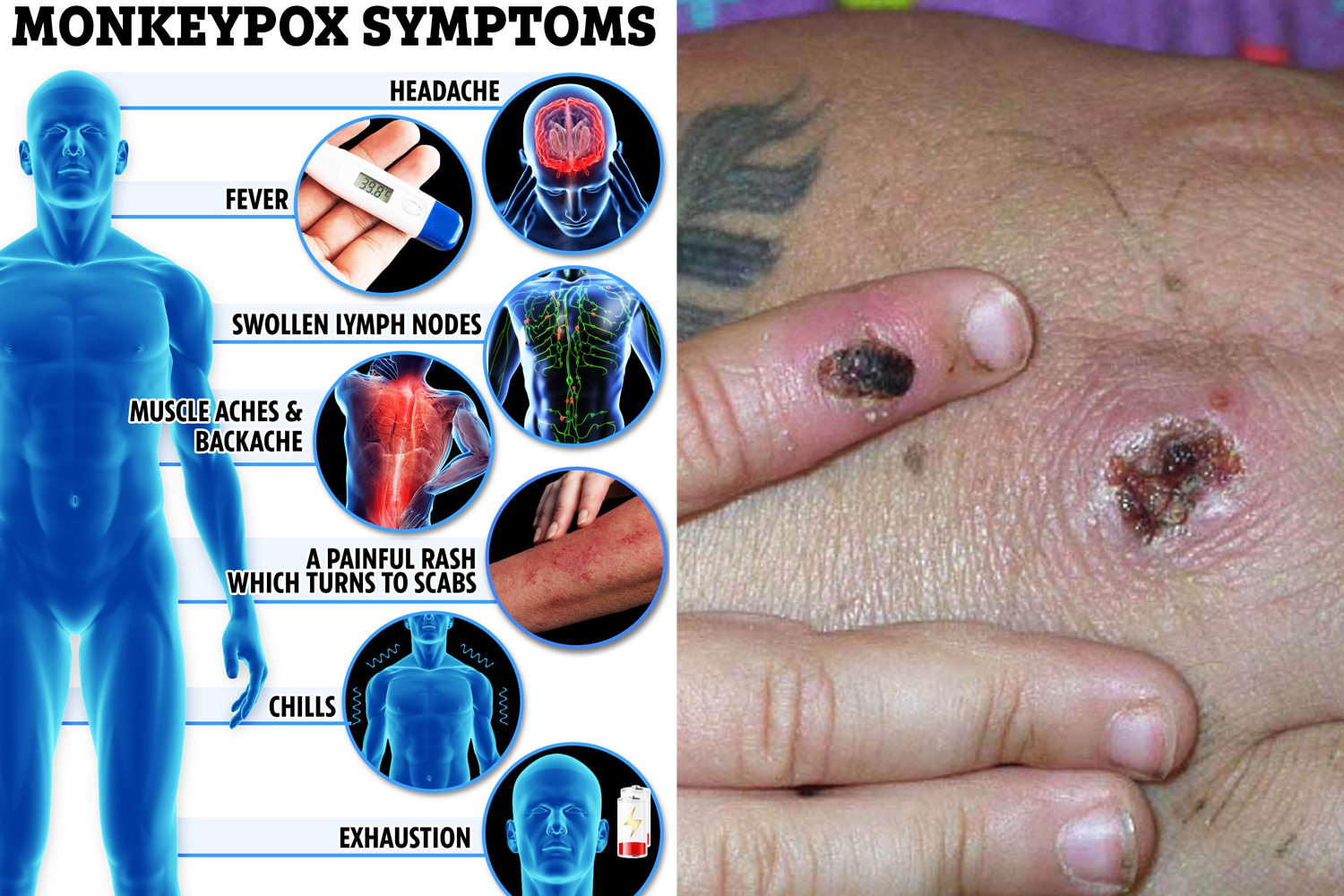 The patients are from North Wales but were treated in Liverpool, England.

Although IMNAVEX is for a different virus, it has been approved for monkeypox by the US FDA because it is so closely related to smallpox.

A small number of healthcare workers treating the patients have been given the jab.

The same jab was used to immunise NHS staff in the UK in 2018 when a monkeypox outbreak occurred and a nurse said she was infected changing the bed sheets of a patient.

Paul Chaplin, President and CEO of Bavarian Nordic said: “We are pleased to assist Public Health England rapidly in such an emergency situation.

“Vaccination is a critical measure to prevent and control the spread of diseases globally.

“Governments have an essential role in preparing for outbreaks by stockpiling vaccines and treatments so that they are readily available in events like this.”

Public Health England said the risk to the public was still considered "low".

New details have emerged about the two monkeypox cases since the Health Secretary Matt Hancock first revealed he was dealing with an "outbreak" last Thursday.

The initial case was likely infected while working in Nigeria, Africa, where there have been random clusters of cases since 2017.

Their symptoms first appeared a few days after they and their family returned from the country on May 8, according to the World Health Organization.

They developed a rash starting on the face – a tell-tale sign of the virus – before being admitted to hospital on May 23.

What is monkeypox and what are the symptoms?

Monkeypox is a virus that passes to humans from wild animals – called a zoonotic disease.

Cases primarily are diagnosed in tropical rainforest areas of Central and West Africa, according to the World Health Organization (WHO).

But even in the countries affected, there have been few cases.

It’s spread from person to person by touching clothing or bedding of an infected person or their spots or scabs.

You can also catch monkeypox if someone with it sneezes or coughs near you, the NHS says

But the risk of catching it is considered low because it doesn't easily spread between people.

Monkeypox, in most cases, is a mild condition which will resolve on its own within a few weeks and have no long-term effects.

It has a mortality rate of between one and 10 per cent, with most deaths occurring in younger age groups.

A painful rash and open sores can then develop, usually starting on the face.

If the rash spreads to the eyes it can cause blindness.

Symptoms generally last from 14 to 21 days, with severe cases relating to age, extent of virus exposure, the patient's health and the severity of complications. 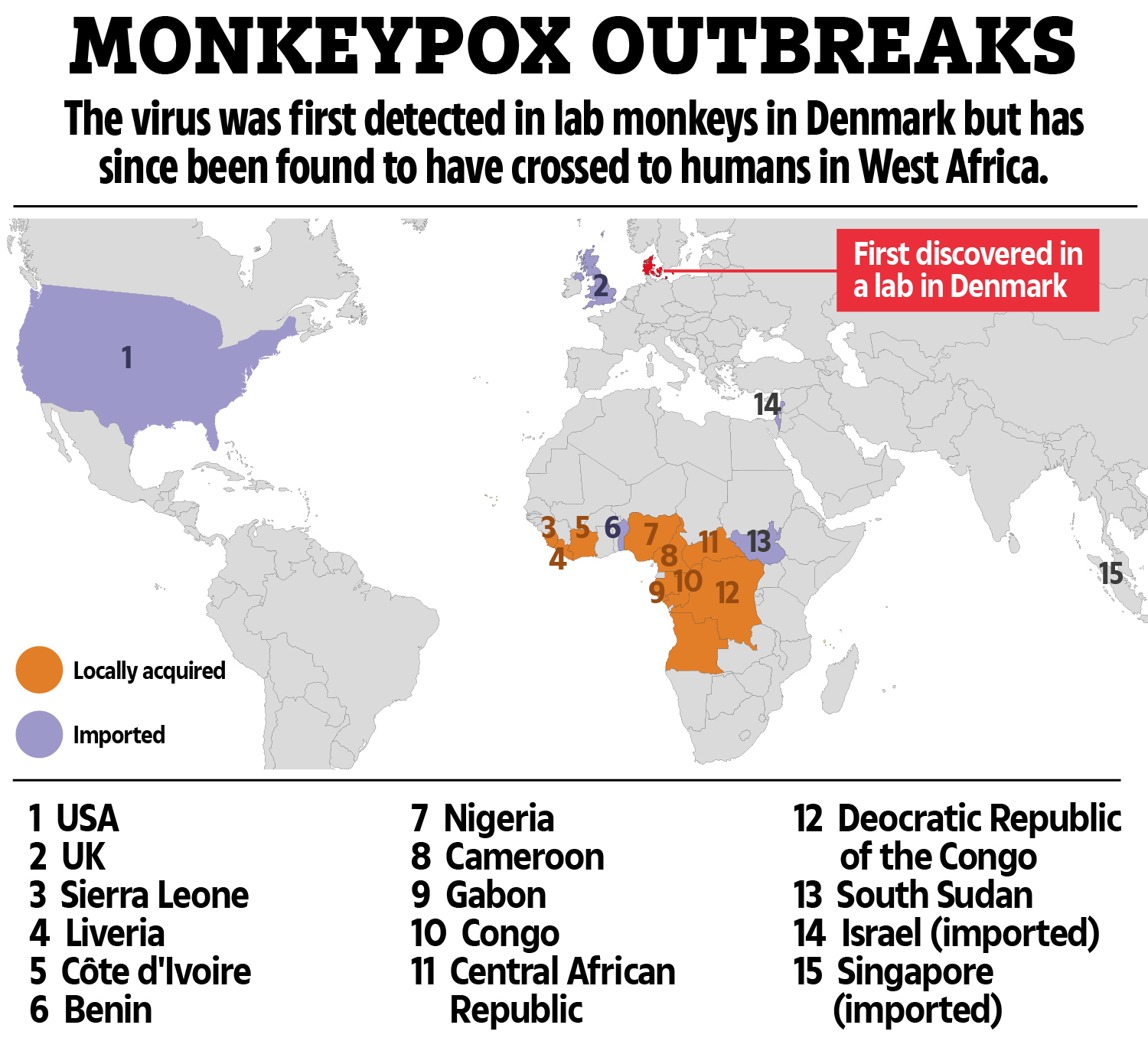 A sibling of the first case is thought to have been infected while in the UK, developing skin lesions on May 29.

Because the family had been self isolating due to Covid travel rules when they arrived in the UK, a Public Health Wales spokesperson said there “is no wider risk to the general public”.

Mr Chaplin said monkeypox is “unfortunately on the rise in Africa and has in recent years shown to cross borders several times”.

It is thought the monkeypox virus has re-emerged in recent years because immunity from smallpox is waning.

The World Health Organization says using smallpox vaccines against monkeypox have been shown to be about 85 per cent effective and therefore may reduce severity of the disease.

“However at the present time, the original (first-generation) smallpox vaccines are no longer available to the general public”, WHO says.

US health chiefs at the CDC says the jabs are used to contain outbreaks when they appear.

Monkeypox is a rare, but serious disease, which is endemic in Central and West Africa.

It has infected only six people in the UK since 2018, all linked with travel to Africa, and it has not spread in the community.

The virus does not jump between people easily, with the largest cluster known to be six people, according to the World Health Organization.

It spreads when someone touches the scabs of someone with the condition or their clothing or bedding.

The disease is quite similar to human smallpox, although it is less severe, killing between one and 10 of 100 infected people.