Detectives in California seized over $1 million in various hallucinogens and other illicit narcotics from a residential home that was also operating as a drug lab, authorities said Tuesday.

Investigators executed a search warrant at a residence in Oildale, located just north of Bakersfield, on Thursday and discovered nearly 23 pounds of the hallucinogen dimethyltryptamine (DMT), worth an estimated street value of $1,040,568, the Kern County Sheriff’s Office said.

The agency’s High Intensity Drug Trafficking Area Task Force also seized just over three pounds of Psilocybin mushrooms worth about $13,880, LSD tabs and vials of liquid LSD worth $3,900, and 10 pounds of marijuana with an estimated worth of $10,000.

A loaded firearm, currency consistent with narcotics sales and small amounts of methamphetamine and cocaine were also found at the scene, the sheriff’s office said. 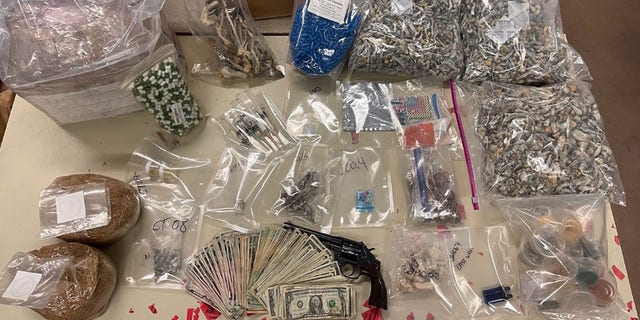 Detectives in California seized over $1 million in various hallucinogenic drugs and other illicit narcotics from a residential home that was also operating as a drug lab, authorities said.
(Kern County Sheriff’s Office)

David Jackson, 42, was arrested after investigators determined he had been maintaining the residence for narcotics sales and the operation of a DMT extraction lab, according to the sheriff’s office.

Detectives said Jackson was living at the residence with his two children, ages 9 and 8. Child Protective Services took custody of the children due to poor living conditions, the presence of dangerous chemicals and the drug extraction lab inside the residence.

Jackson was booked into the county’s Central Receiving Facility on numerous charges, including child endangerment, manufacturing a controlled substance and maintaining a residence for narcotics sales.