Home » World News » Camellias saved a house from bushfire. Now the owner is saving them

Camellias saved a house from bushfire. Now the owner is saving them

Former Helensburgh Fire and Rescue captain Jim Powell spent 41 years saving people’s lives, but he couldn’t protect his other great love and obsession from the 2001 Christmas Day bushfires. He returned home to blackness, his collection of 1100 rare camellias largely destroyed.

“My house was saved, and the camellias saved it. There were 860 in the front garden, and their fleshy leaves absorbed the heat,” said the retired firefighter. 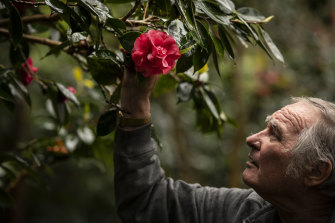 Jim Powell is a member of the Camellia Ark. Its members are working with the Royal Botanic Gardens Trust to save camellias, like the camellia japonica ‘Otahuhu Beauty’ (pictured), that came to Australia with Macarthur. Credit:Wolter Peeters

After that blaze, Mr Powell co-founded Australia’s first Camellia Ark to identify and preserve rare and endangered camellias – many are threatened around the world with some considered sacred or symbolic – that could never be replaced.

These include a 190-year-old bush, the Camellia japonica anemoniflora, said to resemble the Australian waratah, which still flowers at John Macarthur’s Camden Park.

It was thought to be the last remaining plant from Macarthur’s shipment of camellias to Australia in 1830. Members of the Ark have propagated it to ensure it survives. 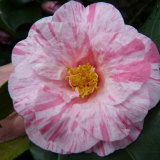 Camellia Japonica Mrs Fairfax: A NSW colonial cultivar developed by Michael Guilfoyle’s Exotic Nursery in Double Bay in 1875. It appeared in a Shepherd’s Nursery Catalogue of 1880. It returned to NSW after 140 years thanks to Camellia Ark Australia. Credit:Dr Stephen Utick, Camellia Ark Australia

A strange camellia planted by the late prime minister Bob Hawke at Sydney’s EG Waterhouse National Camellia Gardens at Caringbah changes its stripes and colours more than the average politician.

Grown by a cutting from an old shiba xueshi japonica tree in Japan, it is also known as the 18 scholars. That’s because it can have as many as 18 different shaped, coloured and striped flowers on a mature tree at the same time.

Another camellia, known as the Mrs Fairfax and likely named after the newspaper family that owned this masthead for nearly 150 years, was lost to NSW. But Stephen Utick, the ark’s secretary and co-founder, found another specimen growing in Victoria’s Botanic Gardens. It was propagated and brought home to NSW with plants deposited at Sydney’s Botanic Garden to ensure its survival.

Dr Utick was this year appointed honorary curator of camellias at the Royal Botanic Garden Sydney to help the garden educate the public about its outstanding camellias. 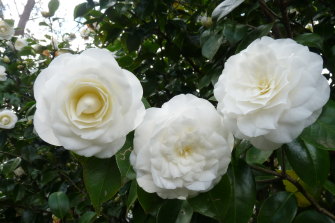 Camellia Japonica.Alba Plena: One of the earliest Chinese camellias to reach the Western world (1792), rose to become the colonial symbol of womanly excellence and the women’s vote in the 1890s.  Credit:Dr Stephen Utick, Camellia Ark Australia

He said camellias had played an important role in Australian garden history since the first recorded plantings at the Royal Botanic Garden Sydney in 1823.

David Laughlin, the garden’s manager and curator, said staff were still working to preserve and propagate these varieties, and their preservation “would maintain a living history for future generations to enjoy”.

Dr Utick describes rare heritage camellia cultivars as ‘living antiques’ that open up the lost nursery and garden worlds of colonial NSW and Asia over the course of two millennia.

If it wasn’t for a white camellia called Alba Plena – “a symbol of womanly excellence” to the suffragettes – Australian and New Zealand women may have taken much longer to get the vote, he said.

The tongzimian baby’s face camellia (only 12 in Australia) is worshipped as a god in northern China. The Australian plants were grown from four cuttings from a very old tree grown at a temple in China guarded by monks. “They watched us, to make sure we only took four,” said Mr Powell, who collected the cuttings.

The third co-founder of the ark, Bill Parker from CamelliasRUS, is trying to save plants that have lived happily in gardens, often for more than 100 years.

Once they are gone, Mr Parker said, “I just know that we will never get these beautiful old camellias back.”

Imports of camellias are banned to protect Australia from a petal blight that turns flowers brown in hours.

Mr Parker saved some old camellias from a developer’s bulldozer in a garden in Mt Colah.

“It was a beautiful old garden. The owners were horrified that their big camellias were going to be chopped down. Some dated back to the 1940s, they were huge, some seven metres.”

“They were like family, the family had grown with the camellias,” he said.

Mr Parker trimmed them hard before they were transplanted and most survived.

And after the longstanding Camellia Grove nursery at St Ives shut down, volunteers saved 93 trees that had grown there for years.

Mr Parker said many gardeners think camellias are hard work, and opt for low maintenance hedges. Once camellias are established, though, ark members say they require little maintenance but a bit of patience – and will only get better over time.

The ark founders say the heritage aspect of gardens is given insufficient weight by councils when they assess development applications or consider maintenance of public gardens and parks.

Camellias are also hardier than most people think, Mr Powell said, with many camellias destroyed by fires on his Helensburgh property sprouting green tips a year or two later. Known around the world for their hardiness to cold, he said camellias regenerated like native plants and provided much needed nectar for native birds, including wattlebirds.