A Missouri woman who was seen on camera holding a broken sign from House Speaker Nancy Pelosi's office during the U.S. Capitol riot is accused of causing a crash Wednesday that left one person dead and another seriously injured, according to authorities and her lawyer.

The Missouri Highway Patrol said in an arrest report that the woman, Emily Hernandez, 22, faces two charges related to driving while intoxicated and causing a crash that resulted in death and serious physical injury. She was also accused of having excessive blood alcohol content, according to the report.

Her lawyer, Ethan Corlija, said Thursday that Hernandez was released from a local hospital after she suffered a serious head injury and wasn’t taken into custody. It wasn’t immediately clear why. 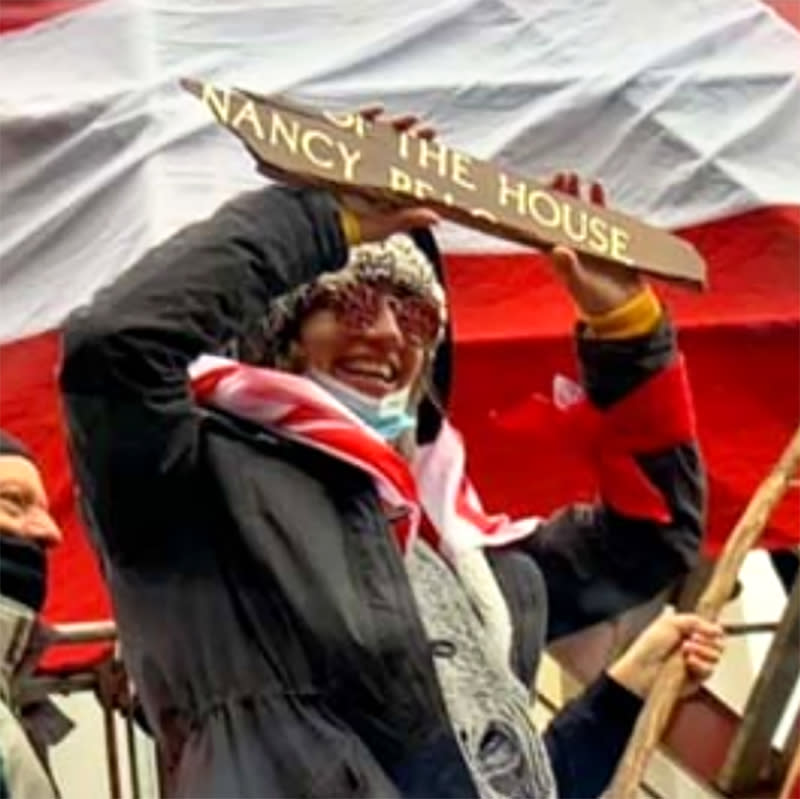 A Missouri Highway Patrol spokesman didn't respond to a request for comment Thursday. Neither did the local prosecutor who would charge Hernandez.

According to a crash report, Hernandez was driving a Volkswagen sedan westward Wednesday night in the eastbound lanes of Interstate 44, about an hour southwest of St. Louis. She swerved to avoid an oncoming SUV, which also swerved. Their vehicles collided, and the SUV struck the median, according to the report.

A 32-year-old woman in the SUV was pronounced dead at the scene, according to the report. A 36-year-old man was taken to a hospital. His condition wasn't clear.

Corlija declined to say what Hernandez was doing when the crash occurred. He said he took authorities "at their word" that she was driving the wrong way and added that he had seen no evidence that she was intoxicated.

"I'm going to leave it to investigators to make that determination," he said. "That answer will become clear."

Hernandez, a farmhand and college student, was accused of five misdemeanor crimes in the Jan. 6, 2021, riot — knowingly entering or remaining in a restricted building or grounds; disorderly conduct; disruptive conduct; parading or demonstrating in the U.S. Capitol; and stealing, selling or conveying federal property, according to a criminal complaint.

In a statement of facts, photos showed Hernandez smiling and surrounded by other rioters as she held a sign that had hung above Pelosi’s office showing her name and title.

He acknowledged that she was "present" at the riot but said she never did anything destructive or harmful inside the Capitol building.

Corlija said Hernandez plans to enter a plea agreement with prosecutors and plead guilty Monday to one charge, knowingly entering or remaining in a restricted building or grounds.