Washington: Derek Chauvin, the former Minneapolis police officer convicted last year of murdering George Floyd, has been sentenced to 20 years in prison on a separate federal charge that he violated Floyd’s civil rights when he pressed his knees into the black man’s neck and back and ignored his cries for help.

Chauvin, 46, pleaded guilty in December as part of a plea deal in which he publicly acknowledged his role in Floyd’s death. For the first time on Thursday (Friday AEST), the former officer admitted that he kept his knees on Floyd’s neck and body even as he heard the man saying he couldn’t breathe and ultimately became unresponsive. He acknowledged he heard bystanders urging him to check Floyd’s pulse but did nothing and blocked others from rendering medical aid. Chauvin also said that he “knew what he was doing was wrong”. 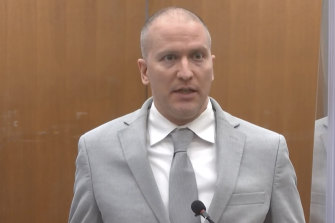 The plea deal, which Chauvin signed, recommended a federal sentence of 20 to 25 years. Last month, prosecutors pressed US District Judge Paul Magnuson, who is overseeing the case, to sentence Chauvin to the full 25 years, arguing the former officer’s actions were “coldblooded” and that he had abused his power as a police officer by failing to recognise the “humanity” of the person beneath his knees.

In a separate motion, Eric Nelson, Chauvin’s lawyer, had requested no more than a 20-year sentence, pointing to his client’s “acceptance of his wrongdoing” and that he is already serving a state sentence of 22½ years for Floyd’s murder. He spoke of Chauvin’s “remorse for the harm that has flowed from his actions” and told the court the former officer would demonstrate that at his sentencing.

But in a brief statement during Friday’s hearing (AEST), Chauvin did not offer any formal apologies or remorse for his actions. Addressing members of Floyd’s family, the former officer, who was dressed in an orange prison jumpsuit for the proceedings, said he wasn’t sure how many children Floyd had. “I just want to say I wish them all the best in their life,” Chauvin said, adding that he hoped they have “guidance in becoming great adults”.

“To put your knee on someone else’s neck until they expire is simply wrong and you must be punished.”

Chauvin also acknowledged the “unpleasant” decision facing Magnuson as he considered a sentence in a “politically charged environment”.

As part of the plea deal, prosecutors agreed to allow the former officer to serve his federal sentence concurrently with this state murder sentence. The deal also allowed Chauvin, who has been held in solitary confinement at a state prison since his April 2021 conviction, to be transferred to a federal prison where Chauvin is likely to be safer – though in asking for a lesser sentence, Nelson argued that his client is likely to be a target no matter where he goes because of the notoriety surrounding the case.

But Chauvin’s sentence and the conditions of his confinement were ultimately determined by Magnuson, who strongly condemned Chauvin’s actions.

“I really don’t know why you did what you did. But to put your knee on someone else’s neck until they expire is simply wrong and you must be punished,” Magnuson said. “Your conduct is wrong, and it is offensive. To put a knee on another person’s neck is unconscionable.”

Still, Magnuson sentenced Chauvin on the lower end of the sentencing request – 240 months for violating Floyd’s federal civil rights. He was given another five months for a second federal charge alleging he violated the civil rights of a 14-year-old by hitting him with a flashlight and kneeling on him during a 2017 arrest – which Chauvin also pleaded guilty to as part of the plea deal. John Pope, who is now 19, lost consciousness at one point during that encounter. 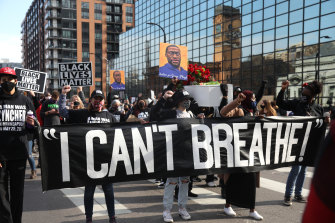 Demonstrators carry a banner during an ‘I Can’t Breathe’ Silent March For Justice in Minneapolis, Minnesota, in March 2021. Derek Chauvin knelt on George Floyd’s neck for nearly 9 minutes.Credit:Bloomberg

Chauvin was given seven months credit for time served, bringing the total sentence to 252 months, according to Magnuson.

The sentencing came on the same day the former Cleveland officer who fatally shot 12-year-old Tamir Rice in 2014 resigned as the lone police officer in a small Pennsylvania town, two days after his swearing-in sparked backlash from residents and the mayor.

Loehmann was sworn in this week after a unanimous vote from the borough’s council, council president Steve Hazlett wrote on social media.

A photo and caption from Hazlett on Facebook clarified that the officer hired to represent the borough of about 700 people was Loehmann, who was fired from the Cleveland Police Department in 2017 for lying on his job application but faced no criminal charges connected to Rice’s death.

Rice was carrying a pellet gun at a playground when he was shot and killed by Loehmann in November 2014, spurring nationwide protests over law enforcement’s use of deadly force against black people.

The hiring sparked protests and anger, including from Samaria Rice, Tamir’s mother, who said before Loehmann’s resignation that the decision was “a big mistake”.

“He shouldn’t be a police officer anywhere in the United States,” she said, adding that she was enraged and concerned for the Tioga community. “I’m actually shocked that anybody would give him a job knowing what he has done to my family.”