Authorities in the northern city of Tianjin confirmed the case in an individual who entered the country from an undisclosed overseas location, according to the Tianjin Daily newspaper.

The asymptomatic patient tested positive for Covid-19 on Thursday before further tests ‘confirmed the detection of the Omicron variant’, the report said, adding that the person was being treated in isolation at hospital.

It comes as hundreds of thousands of people in major Chinese manufacturing province Zhejiang are plunged into quarantine amid a recent outbreak of Covid, with the state suspending business operations, cutting flights and cancelling events.

The province reported 74 locally transmitted cases with confirmed symptoms on Dec. 12, official data showed today, almost double the previous day’s 38 cases, lifting to 173 the total since the province started to report cases for the latest outbreak.

The world’s most populous nation is on high alert for potential outbreaks as it prepares to host the Beijing Winter Olympics in February. 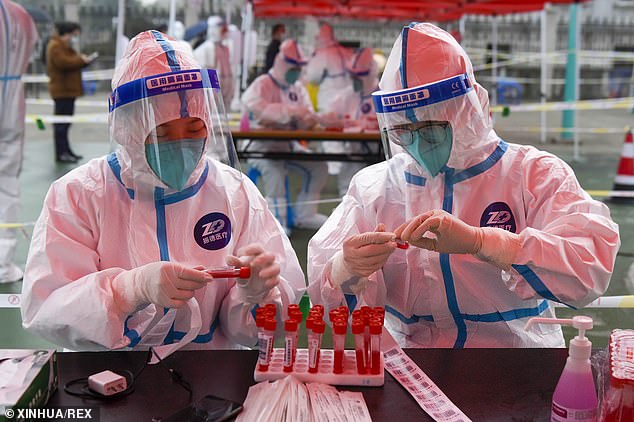 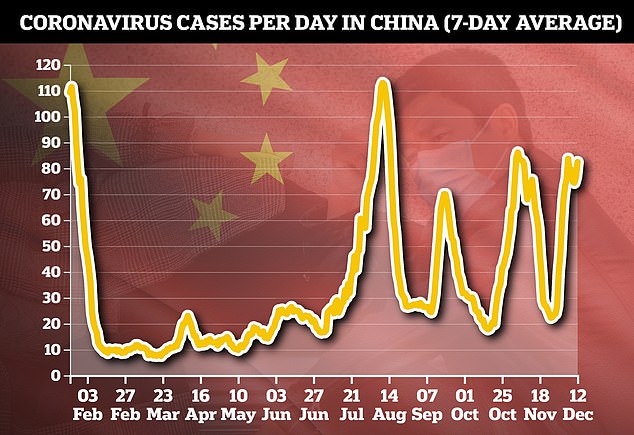 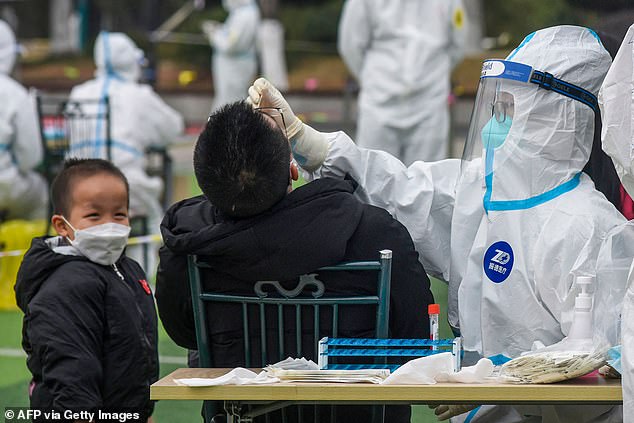 A resident undergoes nucleic acid tests for the Covid-19 coronavirus in Ningbo in China’s eastern Zhejiang province on December 8, 2021, before the region was plunged into quarantine 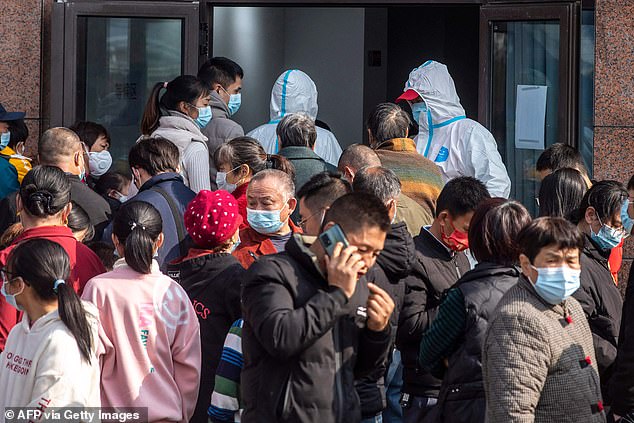 Disease control agencies affiliated with the State Council – China’s cabinet – have ordered stronger virus protocols in port cities like Tianjin, which lies around 87 miles from the capital, to prevent the transmission of Omicron.

China has slowed its number of new virus cases to a trickle through a combination of tight border restrictions, mass testing and targeted lockdowns.

The country recorded 101 new Covid-19 cases on Monday, including 21 imported infections, according to data from the National Health Commission.

Despite the comparatively miniscule numbers of new cases in China versus the UK, a small outbreak in three cities in the Zhejiang province – Ningbo, Shaoxing and Hangzhou – has sparked widespread restrictions and quarantines.

More than half a million people in Zhejiang have been quarantined at centralised facilities, a province health official said on Monday.

The coastal province has a population of 64.6 million.

Zhejiang has ordered travel agencies to suspend organising tourism trips linking the province and other areas and has also halted province-level sports events.

The outbreak was developing at a ‘relatively rapid’ speed, while the situation nationwide was largely stable, National Health Commission official Wu Liangyou said on Saturday. 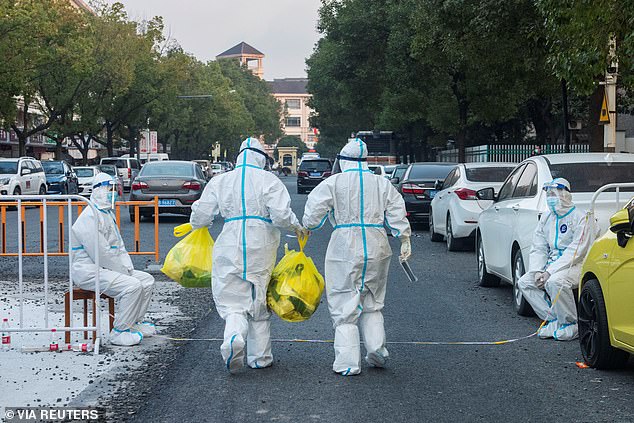 Workers in protective suits carry items for residents at a compound under lockdown following new cases of the coronavirus disease (COVID-19) in Zhenhai district of Ningbo, Zhejiang province, China December 7, 2021

Before the current outbreak, Zhejiang – home to a legion of small and medium-sized enterprises, many of which are exporters – reported only one local case in 2021.

More than a dozen Chinese-listed companies said they had suspended production in parts of Zhejiang owing to tightened COVID-19 curbs.

Outbreaks in dozens of Chinese cities this year remained smaller than many overseas, but local governments were told to ensure infections are detected and contained as early as possible to prevent further spreading, triggering curbs that have led to occasional disruption to travel and tourism.

Flights leaving Ningbo Lishe International Airport to Shenzhen city were suspended from Sunday, while flights to Beijing were cancelled from Dec. 6. Only one daily flight from Hangzhou to China’s capital is allowed.

Wenzhou and Yiwu, two cities in Zhejiang yet to report local cases from the latest outbreak, ordered the closure of entertainment venues such as bars and chess and card parlours.

Apart from the 74 local symptomatic infections in Zhejiang, Shaanxi province and the northern Chinese region of Inner Mongolia reported one and five local cases respectively on Sunday.

As of Dec. 12, mainland China had 99,780 symptomatic cases, including those arriving from abroad. The death toll remained unchanged at 4,636.