London: Lawyers for Julian Assange have told Britain’s High Court that the reported CIA plot to kill or kidnap the Australian shows that the US government’s pledge to safely extradite the WikiLeaks founder can’t be trusted.

Assange is wanted by the US over the theft by hacking of hundreds of thousands of classified US cables, which WikiLeaks published a decade ago. 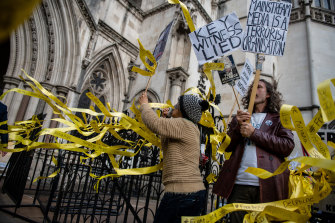 Protesters outside the Royal Courts of Justice in London demand that Julian Assange be freed.Credit:Getty Images

Assange’s lawyers said he was too unwell to attend the second and final day of his court hearing on Wednesday after taking a higher dosage of medication. Assange had intermittently appeared via video link from Belmarsh Prison on Tuesday, but the court was told this was only due to his mistaken belief that the court had ordered him to attend.

But Assange’s silk Mark Summers told the court that the US previously had every opportunity to provide such a statement but had deliberately kept the option on the table, and only taken it off “for tactical advantage when it lost”.

“It’s an impermissible attempt to recast the case,” Summers said. “They should not be permitted the ‘sea change’ they seek.”

He said that the CIA would exploit a caveat whereby the US had said Assange could still face the toughest prison conditions if he were deemed to have compromised US national security with future actions. 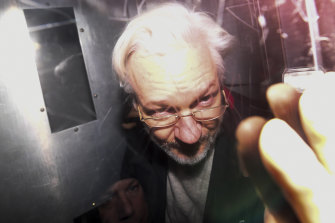 Julian Assange leaves in a prison van after appearing in a London court last year.Credit:AP

Summers pointed to last month’s report by Yahoo! News, which said the CIA had game planned killing or kidnapping Assange from the Ecuadorian embassy in London, where he spent seven years having sought asylum to avoid being extradited to Sweden to face possible sexual assault charges.

The US also gave a diplomatic assurance that Assange could apply to serve out any prison sentence in Australia, but Summers said there had been “no indication from Australia” that they would agree to this.

Edward Fitzgerald, QC, who is also acting for Assange, said that Assange was so severely “mentally disordered” that he would be driven to suicide regardless of which prison he was sent to.

”Your Lordship will know from the many inquests into deaths in custody that people find ways to commit suicide whether they’re clever or not clever but whether they’re driven,” he said.

James Lewis, QC, responding for the US government, said Assange was shifting the ground and now arguing that the very act of extradition would trigger a suicide, something he said would set a dangerous precedent for all extradition cases.

“That is the trump card,” he said. “Anyone can defeat extradition.”

He said that providing diplomatic assurances after the ruling was deliberately reactive, as they could only be provided after a judge had expressed concern.

“These are not dished out like smarties, and they are only dished out in the light of a strong finding that it is essential to facilitate extradition,” he said.

“An assurance will almost be responsive or reactive by their very nature, it’s not always possible to anticipate the area that the judge is particularly concerned about or how that might be properly addressed.”

He said that providing Assange with the “hope” of serving any sentence in Australia would reduce his suicidal ideology.

The two-day appeal concluded on Wednesday and Assange will remain behind bars while Lord Chief Justices Ian Burnett and Lord Justice Tim Holroyde make their decision, which is expected in four to six weeks.

Assange’s father John Shipton flew from Australia for the hearing and watched the court proceedings from the public gallery along with Stella Moris, the father of two of Assange’s five children, and Kristinn Hrafnsson from WikiLeaks.