Just Stop Oil, Insulate Britain and Jeremy Corbyn say they will join forces to bring London to a standstill tomorrow as thousands join ‘civil resistance march’ in protest against cost of living and climate crises

Climate-change zealots are plotting to paralyse central London this weekend with a mass civil resistance march.

Just Stop Oil is hoping for 1,500 of its volunteers to get arrested twice during the protests, which will see demonstrators blocking bridges over the Thames in London.

The demo will begin at 11am when volunteers will assemble at 25 starting points across London including Waterloo, Paddington and Euston stations. 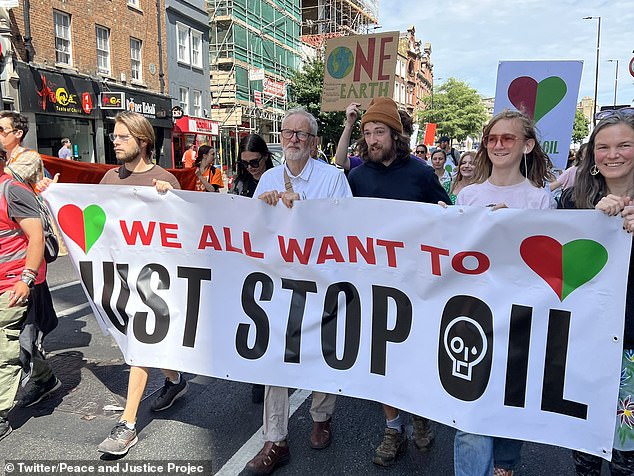 Just Stop Oil is hoping for 1,500 of its volunteers to get arrested twice during the protests, which will see demonstrators blocking bridges over the Thames in London.  Pictured: Jeremy Corbyn at a Just Stop Oil march

The groups will then converge at Westminster to ‘demand an end to the economic and moral madness of continued oil and gas expansion’.

Just Stop Oil’s found Roger Hallam was revealed by The Mail on Sunday to have said that Metropolitan Police would be ‘too scared’ to arrest activists at first but that it would be forced to do so as the protests escalate.

He said the group was aiming to identify and recruit 1,500 people prepared to get arrested twice in London during the campaign.

Another activist, a former businessman in his late 40s, told a meeting in Norwich earlier this month: ‘We’ve talked to people in the judicial system and they reckon the system couldn’t really cope with about 3,000 arrests.’

The group began its project on April 1 and since then has seen 1,296 arrests as the protestors demanded the government end new oil and gas projects in the UK.

In some locations, Just Stop Oil supporters blocked access to the petrol pumps by sitting in the road with banners to stop drivers filling up their cars. 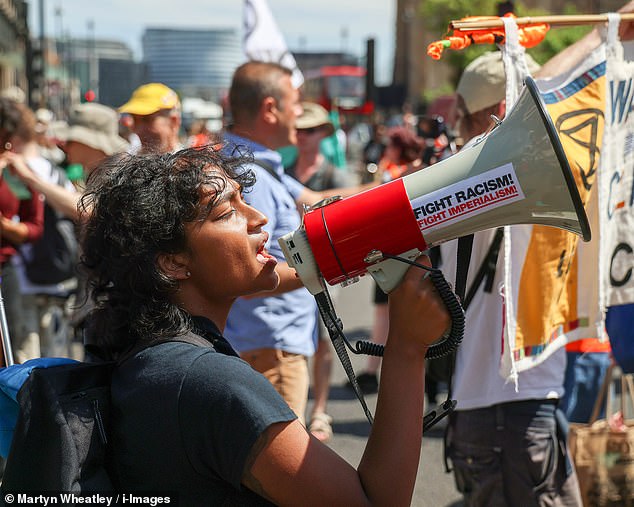 The chaos will ensue at 11am where volunteers will assemble at 25 starting points across London including Waterloo, Paddington and Euston stations. Pictured: Just Stop Oil protest in July

And last month protesters caused the closure of four fuel stations at motorway services on the M25.

A Just Stop Oil spokesman said: ‘We are currently witnessing the breakdown of all we hold dear. Our government has not ‘got this’ – they are increasing the grip of fossil fuels at our throat.

‘If the government won’t stop approving new oil and gas projects then we will make them stop. Come to Westminster from October 1 to peacefully join thousands of other ordinary people in civil resistance because our lives depend on it.’

Jeremy Corbyn, the founder of the Peace and Justice Project, said: ‘Record breaking weather is happening everywhere and everything is too expensive. That’s the crisis. You can’t separate out the cost of living and climate crises. The whole system, which creates billionaires and starves hundreds of millions, is the crisis. It can’t be resolved, it must be overcome and transformed.’ 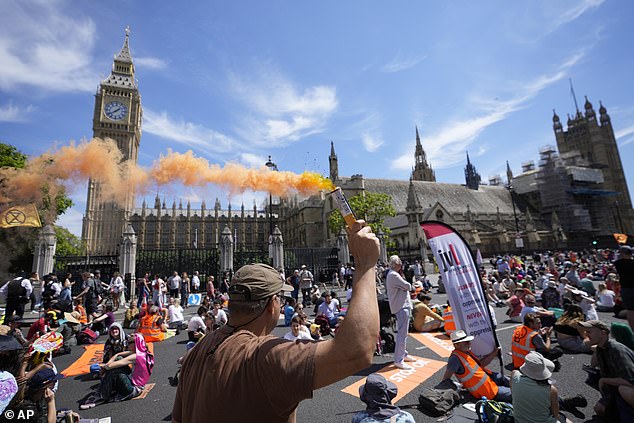 The groups will then converge at Westminster to ‘demand an end to the economic and moral madness of continued oil and gas expansion’. Pictured: Just Stop Oil protest in July

Stuart Bretherton, 24, Energy For All Campaign Coordinator, Fuel Poverty Action said: ‘The climate crisis and the cost of living crisis are a direct result of how our economy is run for the benefit of an energy industry that will chew us up and spit us out.

‘But at the same time we have common solutions to both these crises. Climate justice doesn’t mean further hardship, it means warm homes, lower bills, cleaner air and a better economy for every one of us.’

Lee Jasper of Blaksox, said: ‘The west relentlessly pumps out its carbon gas to feed its insatiable consumer economies, while the poorest people on the planet, in the global south endure climate catastrophe, famine and drought, whose people are being sacrificed to maintain unsustainable western lifestyles. We need climate change and climate justice.’

Zita Holbourne, chair of Black Activists Rising Against Cuts, (BARAC UK) said: ‘The issues of climate displacement, environmental injustice, migration, colonialism, reparations and systemic racism are all interconnected and part of the same struggle for racial justice and human rights globally. There can be nothing about us without us and until all of us are free, none of us are free.’

Liam Norton, from Insulate Britain, said: ‘The government’s plan to open new oil, gas and coal projects is the biggest act of government criminality in our history. They are participating in the destruction of this country and the murder of countless people around the world. What else can you call it? In order to stop new oil and gas we need to Insulate Britain. Now.’