Many on this side of the pond may have not been familiar with the Confederate flag until its reemergence in recent years thanks to the emboldening of the Far Right by outgoing President Donald Trump. Lawless mobs descended on the Capitol in Washington DC this week to attempt an insurrection on the democratically elected incoming US Government, headed by Joe Biden.

America, and the rest of the world, watched in horror as Far-Right extremists broke into the place where America makes and passes its laws on Wednesday, egged on by the outgoing president.

Mr Trump has been refusing to concede the election since the results were declared in favour of the Democrats back in November.

Mr Biden is due to be inaugurated on January 20.

Rioters inside and outside the building were carrying one of the most infamous symbols of racism and extremism in modern-day America: the Confederate flag. 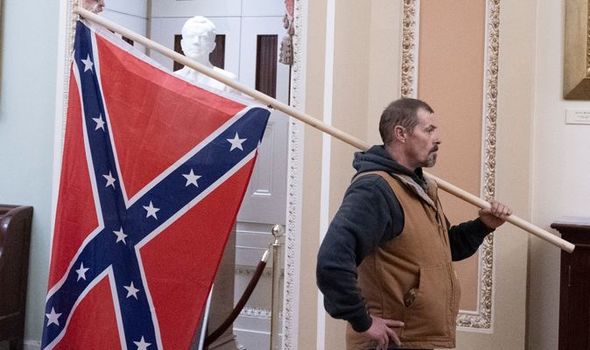 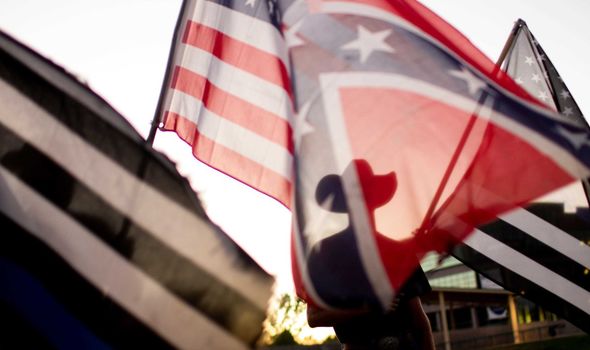 What is the Confederate flag?

The flag, colloquially known as the Stars and Bars, is emblematic of the ideal of whiteness and social and political exclusion of non-white people in America.

It harks all the way back to the American Civil War, when it was created to represent several states fighting against the abolitionists, who wanted to rid the country of slavery.

The flag represents the Confederate States of America, which was created in 1861 when 11 states removed themselves from the USA. 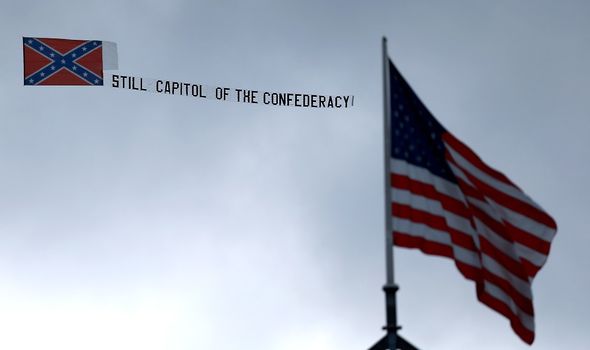 These breakaway states were South Carolina, Mississippi, Florida, Alabama, Georgia, Louisiana, Texas, Virginia, Arkansas, Tennessee, and North Carolina, all of which are located in the southeastern region of the country.

The rebellion was prompted by the election of Abraham Lincoln to the White House, who wanted to ban slavery in US territories which were not states.

The southern states, which relied almost entirely on slavery for the workforce, saw this as an attack on their constitutional rights and that they could be next in Lincoln’s plans.

In a speech known today as the Cornerstone Address, Confederate Vice President Alexander H Stephens described its ideology as being centrally based “upon the great truth that the negro is not equal to the white man; that slavery, subordination to the superior race, is his natural and normal condition”.

DON’T MISS
Who was Ashli Babbitt? Rioter killed at the Capitol [INSIGHT]
How far is Capitol from the White House, what is the Capitol Building? [EXPLAINER]
Where is Melania Trump? Has Melania spoken out Washington protests? [ANALYSIS]

The Civil War ensued between the northern states, loyal to the union, and the Confederate states.

The flag has had an unfortunate resurgence in recent years, particularly in light of Mr Trump’s presidency.

Sometimes romanticised as a symbol of a lost southern way of life, the flag has been used by groups such as the KKK and is frequently used by MAGA enthusiasts.

Laura Edwards, a history professor at Princeton University, told USA Today the flying of the Confederate flag has now become a statement about revolution. 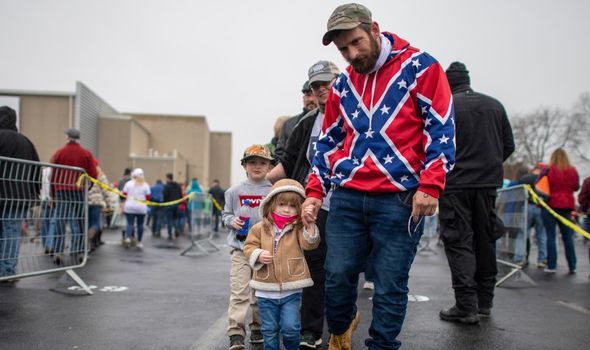 She said: ”It’s a statement not only about revolution but a particular kind, which is in support of white supremacy.”

Representative Bennie Thompson, a Democrat from Mississippi who chairs the House Homeland Security Committee, said the rioters and looters carrying the flag at the Capitol sent a clear message.

He said: “It’s hard for Donald Trump and his kind to pretend that they don’t see race or that they’re not racist when the symbol of the people you have invited here is the Confederate battle flag or the Trump 2020 flag.

“For a lot of us, they’re synonymous.”

Mr Thompson called it “horrible” that the “terrorists” were waving the Confederate flag during the attack on the Capitol.

Mr Thompson said: “That’s the flag of the Confederacy. That was the flag that this country fought a war over, and it was because of slavery.

“And here we have people who see that as a symbol for wanting their freedom back, which is a racist symbol.”