The federal and state governments have been urged to consider delaying building the $13 billion Melbourne Airport Rail project over concerns about potential cost blow-outs and low patronage in its first decade of operation.

Infrastructure Australia, the federal infrastructure adviser, also said the project needed to consult more with Melbourne Airport, which it said was blindsided by plans for an elevated “sky rail” station instead of its preferred option of an underground station. 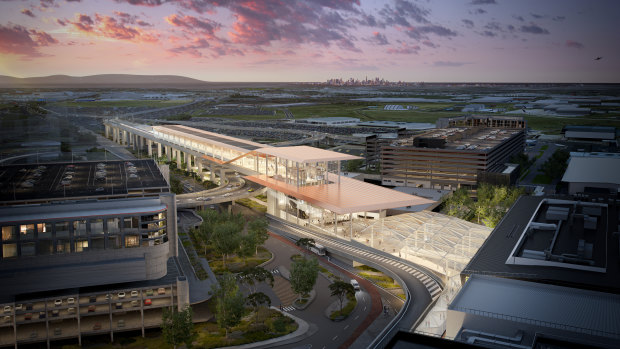 An artist’s impression of a proposed elevated rail station at Melbourne Airport when a new link to the CBD is built.

The Victorian and Commonwealth governments have committed $5 billion each for the long-awaited airport rail, which will start major construction next year and run from central Melbourne to the airport in 30 minutes when it opens in 2029.

But in an assessment of the rail link’s business case released on Monday, Infrastructure Australia found more work was needed before federal dollars were poured into the project, which has a budget of $8 billion to $13 billion.

“The strategic need for Melbourne Airport Rail is strong and there will be long-term benefits,” the assessment says.

“However … we recommend further work is undertaken to improve certainty of the cost estimates, cost escalation risk, and outcomes of stakeholder engagement, particularly with Melbourne Airport.”

Infrastructure Australia is an independent government adviser that is required to evaluate the merits of proposed projects seeking $250 million or more in federal funds.

Its assessment was to not put Melbourne Airport Rail project on its “Infrastructure Priority List”.

A key issue with the rail project is that the recently widened Tullamarine Freeway is not forecast to reach capacity until 2036, the assessment says. This “undermines” the rail link’s short-term benefits and would result in lower passenger volumes for the first 10 years of operation.

“This indicates that construction could be deferred to better align with forecast demand,” the assessment says.

“Given these issues … further investigation is warranted on the timing of the proposal and to provide greater certainty of costs and maximise societal benefits.”