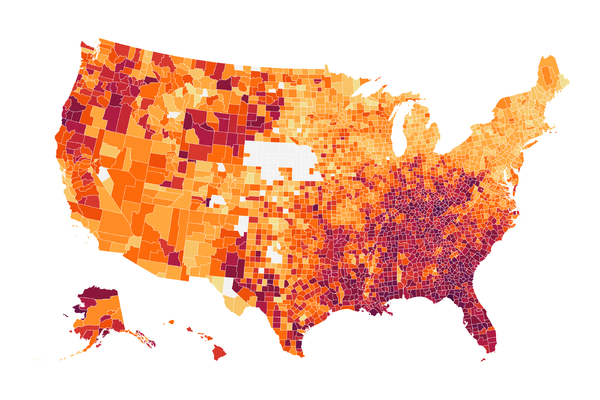 Coronavirus in the U.S.: Latest Map and Case Count

Track Covid-19 in your area, and get the latest state and county data on cases, deaths, hospitalizations, tests and vaccinations.

Over the past week, an average of roughly 164,300 coronavirus cases has been reported each day in the United States, an increase of 14 percent from two weeks ago and 63 percent of the country’s highest average of nearly 260,000, reached in early January.

Total cases are likely to surpass 40 million within days.

Oregon, Hawaii, South Carolina, Washington State and the U.S. territory of Guam have reported more coronavirus cases in the past week than in any other seven-day period. Kentucky is also near its worst point ever, having reached an all-time high in its daily case average on Monday.

More than 101,500 coronavirus patients are hospitalized nationwide, including more than 15,500 in Florida, which has a far higher hospitalization rate than any other state.

The nation’s daily reports of new deaths are up 67 percent from a week ago, to an average of 1,521 deaths per day. That is nearly half the country’s highest average of 3,352, reached on Jan. 12.

Weekly Covid deaths in Florida have been breaking state records since Aug. 19 and again hit a new high of 2,277 for the past week.

The pace of vaccinations continues to increase as more workplaces require employees to get the shots. Around 900,000 doses are being administered each day, up from a low of 506,771 on July 11. However, the current average is 73 percent lower than the peak average of 3.38 million reached in mid-April.

About 62 percent of the eligible American population (age 12 and over) are fully vaccinated and another 11 percent have received the first dose of a two-dose vaccine.

Four states have not yet fully vaccinated 50 percent of their adult populations: Alabama, Mississippi, Wyoming and West Virginia.