Victorians will not be required to get a test if they are exposed to COVID-19 at places such as cafes, schools, supermarkets and offices under significant changes to protocols agreed between state and federal governments.

Prime Minister Scott Morrison said the “reset” – agreed to by all states and territories except Western Australia for now – was a result of problems caused by the infectious Omicron variant, including the huge strain on PCR testing that has led to Australians queuing for hours.

The announcement came on a day when Australia recorded 21,000 new daily cases, including more than 5100 in Victoria and 12,200 in NSW.

Chief Medical Officer Paul Kelly said cases would continue to rise, but Australia was well placed to handle them given data from South Africa suggested Omicron was 73 per cent less severe compared with the Delta variant.

“Now that [case numbers] may rise over time as well, but at the moment that is what we’re seeing – a much less severe spectrum. So that brings about a change,” he said.

The new rules include a shortening of isolation for people who test positive to COVID-19 from 10 days to seven if they produce a negative rapid antigen test on day six, under the plan first revealed by The Age this week.

The Victorian government supported the relaxation of the rules, which is designed to alleviate staff shortages caused by workers forced to isolate and to preserve PCR tests for those who need them most.

States at the beginning of their first waves, such as Queensland (2222) and South Australia (1472), recorded steep rises. Case numbers are believed to be higher than reported owing to testing and result delays that have left many relying on rapid antigen tests for confirmation. 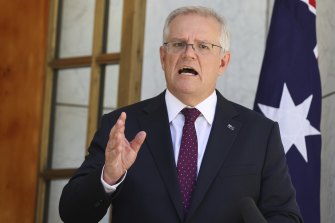 The national cabinet agreed close contacts should be defined as people who live with a confirmed case or have been with them for four hours in an accommodation or care setting.

Close contacts would have to isolate for seven days, with a rapid antigen test on day six to end isolation. Mr Morrison said that if people were not a close contact or had symptoms, “there is no need for you to be in that [PCR testing] line. You should go home, go to the beach, go and do what you want to do, read a book in the park.”

“The change will help to preserve testing capacity and should limit the number of furloughed health workers, but it will come at the cost of accelerating the outbreak,” he said on Thursday.

The major difference under the new arrangements in Victoria will be that tens of thousands of workplace and school contacts will not be required to get a test and isolate until they receive a result, helping to alleviate staff shortages and other disruption.

Under the new arrangements, it would still be open to the Victorian government to alert social or workplace contacts that they have been exposed and recommend a rapid test if they develop symptoms. However, they will not be asked to queue for a PCR test at one of the state’s busy testing sites.

The other significant change from the national cabinet is a shift to relying on rapid antigen tests, preserving the more accurate PCR tests for those with symptoms or close contacts.

While countries such as Britain and Singapore provide free at-home tests, the national cabinet decided free tests would be limited to those who had some contact with COVID-19, or had symptoms. Other Australians would need to pay for them at pharmacies or supermarkets.

Mr Morrison said: “We’ve taken the careful time to ensure that we’re understanding it as best we can, examining the impact on our hospital system to ensure we’re recalibrating in the right way so Australia can continue to live with this virus.” He referred to the “Omicron pandemic” as a game-changer.

The Australian Health Protection Principal Committee, made up of state chief health officers and the Commonwealth chief medical officer, provided recommendations to the national cabinet on test and isolation requirements.

However, it is unclear if the final changes mirrored the recommendations of the group of health chiefs.

One health source with direct knowledge of the committee’s workings said its recommendations were able to be blocked or amended by the committee’s chair, Professor Kelly.

Mr Morrison, who emphasised hospitalisations were stable amid growing case numbers, said the new rules would take place from midnight on Thursday in Victoria, NSW, the ACT, South Australia and Queensland, and in Tasmania from midnight on Saturday.

Victorian authorities are racing to make changes required to enforce the new protocols and will need to amend public health orders, which may mean the changes don’t occur before midnight. For example, authorities are determining how to supply COVID-positive people with a rapid test to clear themselves on day six of their isolation.

People who are close contacts in Victoria, NSW, Queensland and the ACT will be required to isolate for seven days. Those without symptoms should test themselves with a rapid antigen test on day six and if they test negative, they can leave isolation on day seven. If it is positive, they should take a PCR test. Symptomatic close contacts should have a PCR test.

Tasmania will adopt the new definition from midnight on Saturday and the Northern Territory and Western Australia are expected to follow. South Australia will keep a 10-day isolation requirement. 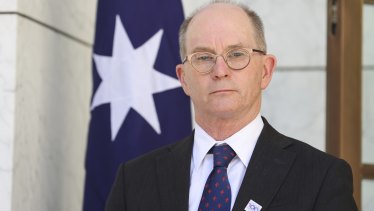 Professor Kelly said international evidence was building that Omicron was a less severe variant. “It is a different virus, very different from previous versions of the virus we have seen over the last two years,” he told reporters on Thursday.

Earlier on Thursday, Health Minister Greg Hunt said that while case numbers were growing, there was strong evidence from Australia, South Africa and Britain that the Omicron variant was less severe than the Delta strain of the coronavirus.

Hospitalisation rates remained low, he said, so the main challenge was now the number of people who were in isolation as close contacts.