More women are being stalked and monitored using drones, shopping rewards cards accounts, pet-tracking devices or other technologies, with calls for help to deal with this form of family violence nearly doubling during the pandemic.

The Salvation Army has reported a 95 per cent increase in demand for support with these sorts of threats in 2020 as more women found that perpetrators were using technology to exert coercive control. 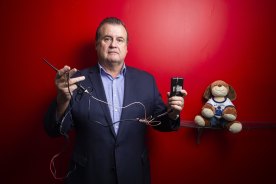 Former policeman Stephen Wilson, who helps family violence survivors debug their online accounts, cars and homes, shows examples of devices Protective Group has found (including a toy in which a device was hidden).Credit:Paul Jeffers

“Wherever we’re using technology, you name it, they are using it,” said Alexandra Miller, national family violence specialist with the Salvation Army.

In the lead-up to the National Summit on Women’s Safety, Ms Miller said stalking and monitoring were strong indicators of future harm to family violence victims, and technological safety must be a focus if women were to remain in their homes and not risk homelessness.

“If you look at domestic violence death reviews, frequently one of the things they say is one of the most indicative behaviours [of future harm] is stalking and monitoring … if someone is going to that level, it’s extremely concerning,” Ms Miller said.

The Salvation Army administers the Commonwealth’s Safer in the Home service, which aims to help women who are at risk of family violence to stay in their homes.

‘We get 100 to 200 women a week coming and asking for assistance around tech abuse. It’s insidious.’

Many women experiencing technology-facilitated abuse and stalking may not recognise it as family violence.

“I recently was consulted about support for a woman who had never been physically harmed by her spouse but stated she was unable to attend a healthcare appointment because she knew that her husband was tracking her movements and she would therefore be unable to access help without his knowledge, which he would not ‘agree’ to,” Ms Miller said.

“His use of technology and other psychological means were sufficient to cause fear enough to exert and maintain complete control of her movements.”

Ms Miller said women should be able to stay connected with friends and family via technology that was integral to everyday life, but “we also want women to be aware of the ways in which technology may be used by perpetrators of violence and of the support available should they need it”. 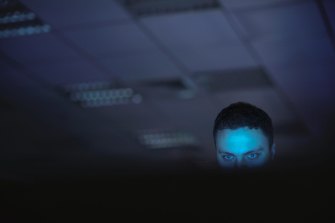 Stephen Wilson, chief executive of Protective Group, which does security sweeps for family violence victims in the Safer in the Home program and for other women seeking help with monitoring or stalking, said demand had as much as quadrupled in the past year.

“Technology abuse and other coercive controls [have become] the new ‘weapon of choice’,” he said.

In one case, a pet tracker was found behind a number plate, trackers had been found hard-wired to women’s cars, and a baby monitor had been used by a perpetrator to listen while hidden outside to a woman speaking with her new partner in the next room to the infant.

In another case, a man used a woman’s Flybuys account, which he had logged into by knowing her email and regular passwords, to discover her usual shopping times and had confronted her and her new partner at the supermarket. 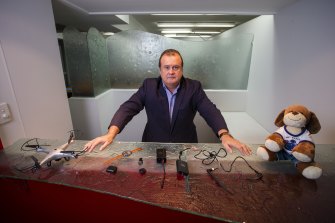 “He waited until she walked out and assaulted both seriously,” said Mr Wilson, a former policeman.

National eSafety Commissioner Julie Inman Grant said technology-facilitated abuse could cause serious psychological and emotional trauma and “we often hear women describe feeling suffocated and trapped in their own homes”.

On Tuesday, she will tell the National Summit on Women’s Safety that 99 per cent of victims of domestic and family violence have also experienced some form of technology-facilitated abuse and “we know it can be an early indicator of physical violence, as we saw in the tragic case of Hannah Clarke and her three beautiful children.

“eSafety has been advocating for the last six years that technology-facilitated abuse be recognised in specific conditions within domestic and family violence intervention orders and in apprehended violence orders and we will continue to fight for these changes,” Ms Inman Grant said.

Hayley Foster, CEO of Rape and Domestic Violence Services Australia, confirmed such abuse had increased in the pandemic. “It’s been on an ongoing trajectory and it’s gotten worse with lockdowns,” she said.

“Police don’t have the resources or adequate expertise to be able to deal with it. To say, ‘just get off social media’ or ‘stop using Facebook’ or ‘leave your phone behind’, none of that is helpful. To be safe, women need access to technology and we need to be able to find a way to make it safe.”

Security expert Stephen Wilson said his group had seen “a huge uptick” in tech abuse since March 2020: “Towards the end of lockdowns, we got a lot more referrals from services of people being able to get out and seek help.”

“We’ve found listening devices and cameras in the home and a lot of compromised devices. We get 100 to 200 women a week coming and asking for assistance around tech abuse. It’s insidious,” he said.

In July, Monash University research for Australia’s National Research Organisation for Women’s Safety also reported that technology-based abuse of women and girls had increased during lockdowns.

If you or anyone you know needs support, you can contact the National Sexual Assault, Domestic and Family Violence Counselling Service on 1800RESPECT (1800 737 732). eSafety resources can be found here.