The HAPPIEST of hugs: Emotional moment care home resident who was forced to celebrate her 100th birthday alone due to Covid is surprised as her only son flies in from US for her 101st

A woman who had to celebrate her 100th birthday without her family last year because of the pandemic was given a surprise reunion with them for her 101st.

Lily Thornett could not see her only son, Brian Thornett, when she reached her century last June because he could not travel over from his home in the US.

But Brian and his wife Suzanne pulled out all the stops to be there for her birthday on June 24 this year, flying in early to ensure there was time to quarantine before seeing her. 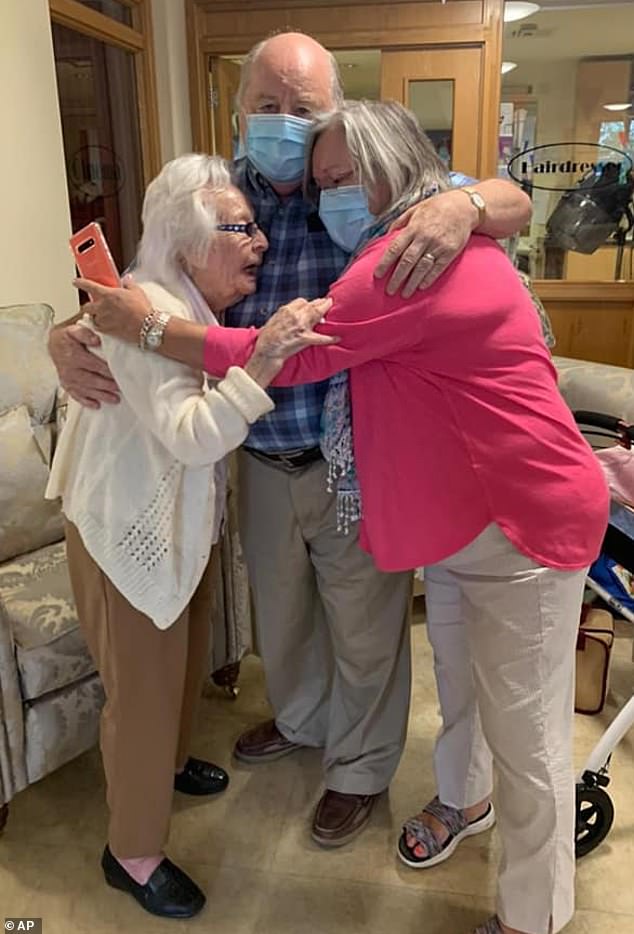 Ms Thornett, who lives at Care UK’s Heather View care home in Crowborough, East Sussex, had not seen her family since the pandemic began.

She said: ‘It was so lovely to see my family again. It was a very special day and we had a lot of fun.’

The family was treated to a special birthday cake and was entertained by an Elvis impersonator.

Natasha King, home manager at Heather View, said: ‘It was a very emotional day for Lily but the smile on her face when she was reunited with her family said it all.

We always like to throw a big party for celebrations but we knew this one had to be extra special – so we invited an Elvis impersonator to the home and decorated the garden to make it the perfect party location.’

Born in London in 1920, Ms Thornett was a milliner after leaving school and was set to go to Paris to train in 1939 until the war broke out and spoiled her plans.

She was a telephone operator at Greenwich Town Hall during the war, before marrying husband Victor in 1942 and welcoming their only child Brian later that year.