The architect of a report that underpinned the Morrison Government’s COVID-19 response says reopening Australia should be put on hold as concerns escalate over the Omicron strain.

Sharon Lewin, the Doherty Institute director who advised on the national plan to roll back public health restrictions, called for the return of mask-wearing indoors and stopping large gathering at pubs and nightclubs. 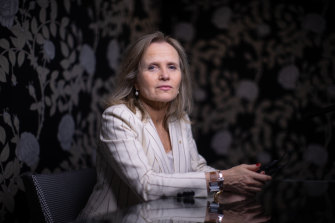 Professor Lewin was joined by Professor John Kaldor and Professor Greg Dore, epidemiologists at the Kirby Institute, based at the University of NSW, in a joint call for a rethink of the re-opening plans.

“We should bring back some restrictions on how people mix for a few weeks, while we get more information on Omicron’s severity and its ability to evade vaccines,” they said in a joint statement.

Their intervention in the issue further ramps up pressure on Premier Dominic Perrottet to reverse the government’s decision to ease restrictions.

From Thursday venues have been reopened to unvaccinated patrons and mandatory mask-wearing and QR code check-ins in shops and restaurants scrapped.

Professor Kaldor said a two-week pause on big indoor events and a return to mask-wearing could avoid tens of thousands of cases in January and a spike in hospital admissions swamping the health service.

“The worst-case scenario is we have tens if not hundreds of thousands of cases early next year and these cases lead to many cases of serious disease because the vaccine is not as effective against Omicron,” he said.

“That would lead to people being very sick and a number of lives being lost that wouldn’t otherwise be lost, as well as pressure on our health services in January when people are on leave, and it’s not a great time to have that pressure.

“The best possible downside of doing something is we have a little more inconvenience and a few events that go ahead in different ways or don’t go ahead at all over a couple of weeks, and we find out that Omicron doesn’t cause serious disease at all and the vaccines remain protective.”

The Doherty Institute advised on the nation’s road map plan to progressively roll back public health restrictions as vaccine benchmarks were reached.

But the road map presumed low case numbers and did not model for the more transmissible Omicron variant, which likely accounts for the majority of the 2566 cases reported in NSW on Sunday.

Premier Perrottet pointed to relatively low numbers of ICU admissions in resisting calls for the reinstatement of the mask-wearing mandate and QR check-ins.

“The vast majority of people not just here in Australia, but around the world, who end up in ICU, have been unvaccinated,” he said on Sunday.

The Premier said it was a matter of “personal responsibility”, and he encouraged the ongoing use of mask wearing as rising case numbers become the “new normal”.

“The government can’t do everything,” he said. “It’s over to the people of our state.”

Labor Opposition Leader Chris Minns backed the reinstatement of mask mandates as a “common-sense decision” were it to “serve the ultimate policy goal of avoiding a lockdown another lockdown in this state”.

Professor Kaldor said Omicron cases could potentially flood ICUs and it would be prudent to bring back the kind of restrictions that had the greatest benefit for the least possible public intrusion.

“The combination of greatly increased transmission rates and uncertain levels of disease severity and vaccine protection means that for the next few weeks, and until the uncertainties are resolved, we must rethink our opening-up plans,” the three epidemiologists wrote in an open letter published by this masthead.

“Ramping up the booster program must continue but will take months to implement in full and cannot be our sole weapon.

“Cancelling or at least heavily restricting large indoor events at which people gather in close proximity and alcohol is served will be unpopular, particularly over the Christmas New Year period but must be understood as a temporary measure.”

Prof Kaldor said there were scenarios under which outdoor events like the New Year’s Eve fireworks could be conducted relatively safely.

“Large gatherings of people indoors at events where alcohol is served are where dozens and dozens of cases are appearing,” Prof Kaldor said.

Families, too, needed to be sensible when gathering in large numbers in the presence of vulnerable members.

The advice applied equally to all states. “I think equally the Federal government should be providing the leadership and commentary and not saying it’s all down to the states.

“The Federal Government can set the tone very well here. The Federal government should be encouraging the states to put a pause on things until we have a clearer idea of what Omicron is going to do in terms of disease seriousness and the degree in which vaccines protect.”

Federal Health minister Greg Hunt said it was a matter for individual states to make their own decisions.

He did not expect state governments to reimpose lockdowns or harsh restrictions in response to the Omicron variant.