London: Britain’s top public health advisers say that eradicating coronavirus is not a realistic prospect for the UK or the world.

Marking one year since he reluctantly ordered the country into its first lockdown, Prime Minister Boris Johnson, who nearly died from COVID-19, said that eradicating the virus was not feasible given the spread of the disease around the world.

“I’m not sure that eradication makes sense in a globalised economy for one country alone,” he said. 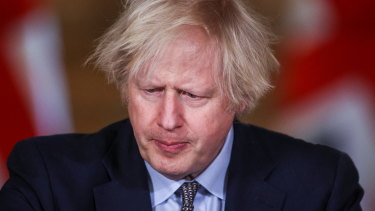 “Plainly as an objective for humanity it’s right and we should aim for it but that’s my view.”

“I regret to say that I think the chances of eradicating this disease, which means getting rid of it everywhere are as close to zero as makes no difference,” he said. 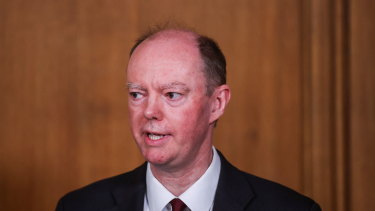 Whitty said that the world had so far only managed to eradicate one disease – Smallpox.

The World Health Organisation has praised Australia’s efforts in all-but eradicating the virus, saying the country not just “flattened the curve” but “destroyed the curve.”

Whitty said that Britain’s goal was to reduce deaths rather than eliminate cases.

“Everyone agrees we can get COVID rates right down and that should be absolutely our aim and get cases of people who die and have severe disease as close to zero as we can. 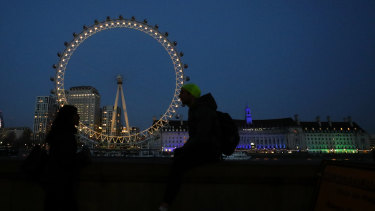 People chat as the London Eye is illuminated in yellow to signify a “beacon of remembrance” in London, one year since PM Johnson announced a national lockdown.Credit:AP

“If we can go further who would say ‘no’? But if you talk to anybody who looks at this really seriously, who understands how infectious diseases work, I don’t think there’s anybody who thinks eliminating from the UK or eradicating globally for any long period of time is a realistic prospect at this point in time.”

Vallance said the public should expect recurrent infections, particularly in winter and that COVID-19 would become a circulating virus, like others have done over thousands of years.

‘Unlike any other struggle in my lifetime’

Asked how he would explain Britain’s coronavirus death toll, the highest in Europe and the fifth-highest in the world, Johnson said international comparisons were “premature” as the pandemic was not yet over.

Britain’s virus death toll according to the Office of National Statistics is 147,179 but 126,284 according to the more widely-used measure which records deaths where people have tested positive for COVID-19 in the 28 days prior.

Johnson said a memorial would be built in Britain to commemorate those killed by the virus and the pandemic more generally amid calls for an inquiry into his management of the pandemic.

Johnson said the past year had been “unlike any other struggle in my lifetime.”

“For month after month, our collective fight against coronavirus was like fighting in the dark against a callous and invisible enemy, until science helped us to turn the lights on and gain the upper hand,” he said.

Asked to identify what course of action he regretted most not taking, he said he wished he and his scientists had known the role asymptomatic cases would play in spreading the disease – a mistake he said governed Britain’s early policies.

“That misunderstanding about the reality about asymptomatic transmission certainly led to real problems that we then really had to work very hard to make up ground,” Johnson said.

Whitty said that the lack of data and testing in Europe and Britain meant that they didn’t begin to have a grasp on the speed of the disease’s spread until people began dying in hospital.

Jonathan Ashworth, the opposition’s health spokesman said an inquiry must be held, saying lessons needed to be learned from Johnson’s “litany of errors”.

“The tragic reality is we’ve seen a litany of errors from Boris Johnson,” Ashworth said.

“Public health should have been central to our response from the start, the failure to sufficiently financially support people to isolate has been a monstrous failure, the lack of protection for care homes was negligent, contact tracing should have been community-led.

“Given future pandemic risk lessons must be learnt meaning a public inquiry is vital,” he said.

England, Scotland and Wales are beginning to ease their coronavirus measures imposed before Christmas with Johnson committed to fully unlocking the country by July.

Cases, hospitalisations and deaths have plummeted since the rollout of vaccines, now totalling more than 30 million doses of the vaccine, making Britain’s rollout the fourth-highest in the world.

The number of people dying each day from the virus has fallen from its peak of almost 1300 to below 100, on a seven-day average; the number of people now in Britain’s hospital with the virus is 5461, down from the mid-January high of more than 41,000 when admissions threatened to overwhelm the NHS.