A Facebook list of ‘dangerous individuals and organizations’ was leaked on Thursday, detailing who the social media giant has attempted to crack down on.

The list contains names of thousands of people and groups who’ve been banned by the site under the title of Dangerous Individuals and Organizations (DIO).

The list was first published by The Intercept and includes more than 4,000 people and organizations are on the list, put together into categories like hate, crime, terrorism and militarized social movements.

The names and groups listed as terrorists are largely taken from a sanctions list that the United States Treasury Department controls.

Many members of far right groups like the Proud Boys, the American Nazi Party, The Daily Stormer, the Ku Klux Klan and the English Defence League are listed, as well as groups tied to the QAnon conspiracy theory. Some factions of the left wing Antifa are also on the list.

Some on the list are long dead historical figures like Adolf Hitler, Benito Mussolini or Joseph Goebbels, Joseph Mengele and even a medical university that’s trying to manufacture a homegrown COVID-19 vaccine in Iran, as well over 200 musical acts.

Others include contemporary people often associated with hate groups, including Klansman David Duke, Fred Phelps of the Westboro Baptist Church, Gavin McInnes of the Proud Boys, Tommy Robinson of the EDL. 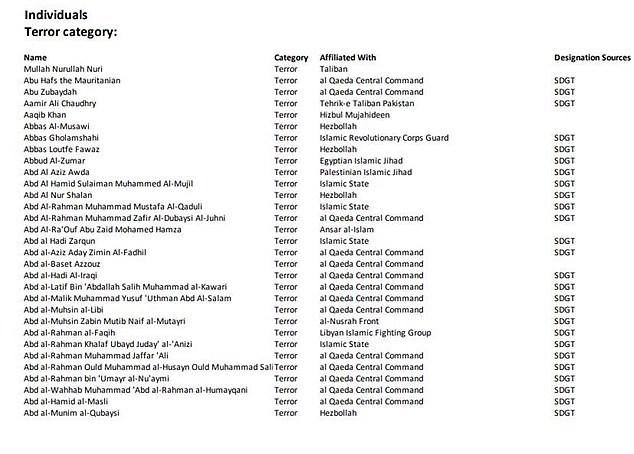 Over 4,000 persons and organizations are on the list, put together into categories like hate, crime, terrorism and militarized social movements 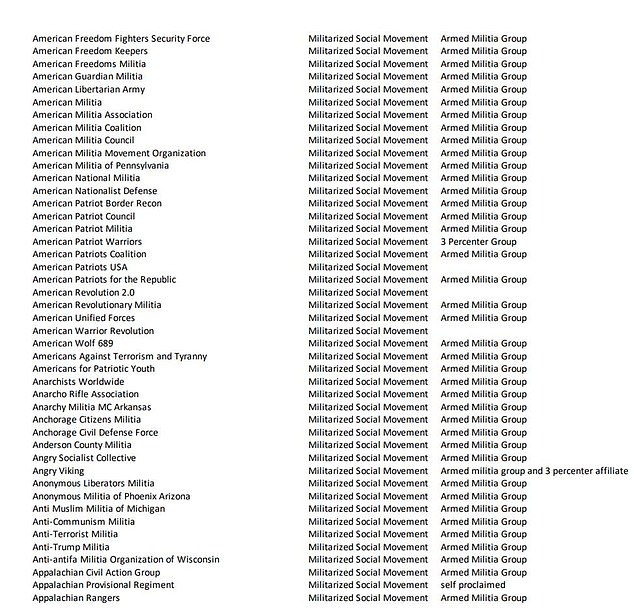 The names on the list are put together under a system of three tiers according to rules that Facebook introduced in late June. Each tier corresponds to a more severe punishment in terms of restricting speech.

Among the criminals in Tier 1 are mostly black and Latino street gangs and drug cartels. The terrorists are predominantly Middle Eastern and South Asian groups and individuals.

Facebook bans users from expressing anything it determines is praise or support of anyone or anything on Tier 1 restrictions, even nonviolent activities.

Tier 2 is reserved for what Facebook calls ‘Violent Non-State Actors,’ often organizations like violent armed rebels who target governments. This includes many of the factions currently fighting a civil war in Syria. 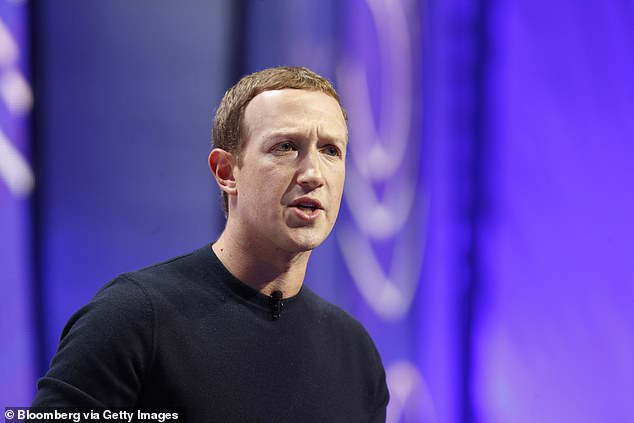 A Facebook list of ‘dangerous individuals and organizations’ was leaked on Thursday, detailing who the social media giant has attempted to crack down on 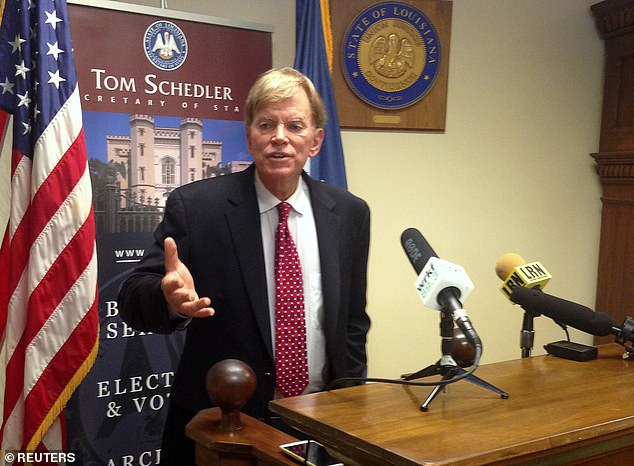 Facebook’s rules make it legal to make supportive statements for the nonviolent actions of these groups and people but you cannot show any substantive support for the groups themselves.

Tier 3 is for largely nonviolent groups that regularly use hate speech, as well as those that may become violent soon and people who violate Facebook’s DIO policies. The infamous American Nazi Richard Spencer is in this tier.

Users are allowed to discuss anyone or anything on Tier 3 — largely right wing anti-government American militias — as they please.

Over 53 percent of those on the list are considered ‘terrorism,’ while 23 percent are in the category of ‘militarized social movements,’ with 17 percent representing hate groups.

The Intercept claimed it published the list ‘because of public concerns about the bias in Facebook’s moderation, so that readers may draw their own conclusions about the quality of that moderation.’

One of the points of contention for some was that more than half of the list consists of accused foreign terrorists who are predominately Middle Eastern, South Asian and Muslim.

Experts told The Intercept that the list and the site’s police suggest Facebook puts tougher rules on marginalized groups.

‘The lists seem to create two disparate systems, with the heaviest penalties applied to heavily Muslim regions and communities,’ said Faiza Patel, co-director of the Brennan Center for Justice’s liberty and national security program. ‘The differences in demographic composition between Tiers 1 and 3 ‘suggests that Facebook — like the U.S. government — considers Muslims to be the most dangerous.’

However, Facebook categorically denied that extremist right-wing organizations were treated differently because of their association with American conservative politics. 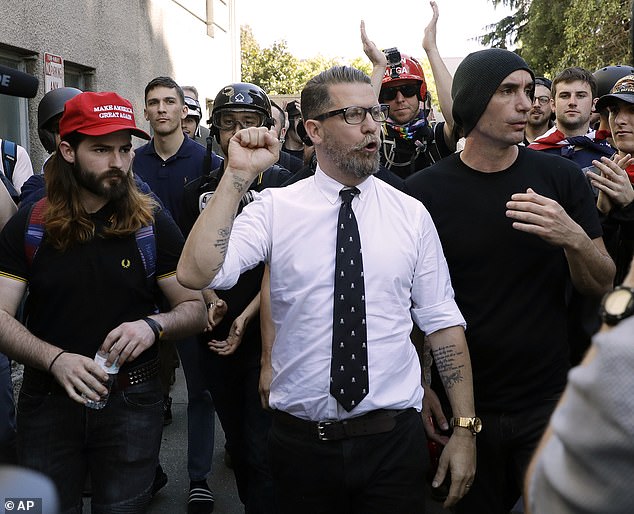 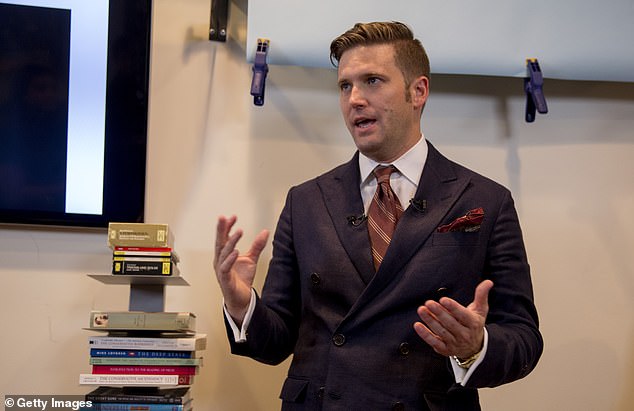 ‘Where American groups satisfy our definition of a terrorist group, they are designated as terrorist organizations (E.g. The Base, Atomwaffen Division, National Socialist Order). Where they satisfy our definition of hate groups, they are designated as hate organizations (For example, Proud Boys, Rise Above Movement, Patriot Front).’

The spokesperson also claimed that focusing only on terrorist groups in Tier 1 was ‘misleading’ and so is looking on it as any sort of anti-Muslim bias.

‘Unlike some other definitions of terrorism, our definition is agnostic to religion, region, political outlook, or ideology,’ the spokesperson said. ‘We have designated many organizations based outside the Middle Eastern and South Asian markets as terrorism, including orgs based in North America and Western Europe (including the National Socialist Order, the Feurerkrieg Division, the Irish Republican Army, and the National Action Group).’

A group of social media researchers from the University of Utah told Facebook recently that including such figures was ‘fraught with problems.’

The restrictions seem to date back to 2012, when Congress and the United Nations began asking for answers from Facebook about possible online terrorist recruiting, according to The Intercept.

As of 2021, there are over 2.89 billion active Facebook users, over a third of the world’s population.