The president of FIFA is now flying to London from Brazil – which is on the international ‘red list’ due to severe Covid conditions.

Mr Infantino is now on his way to watch England play against Italy for the Euro 2020 final at Wembley, it is believed.

Brazil has the second highest COVID-19 death toll in the world, with only the United States reporting more fatalities.

But it was revealed last month that football VIPs would be permitted to visit Britain without having to quarantine as part of a deal to keep the Euro 2020 finals in England.

Visitors agreed not to leave their football ‘bubbles’ as part of an agreement allowing UEFA and FIFA officials, along with sponsors, politicians and broadcasters to be exempt from self-isolation rules upon arriving in the UK. 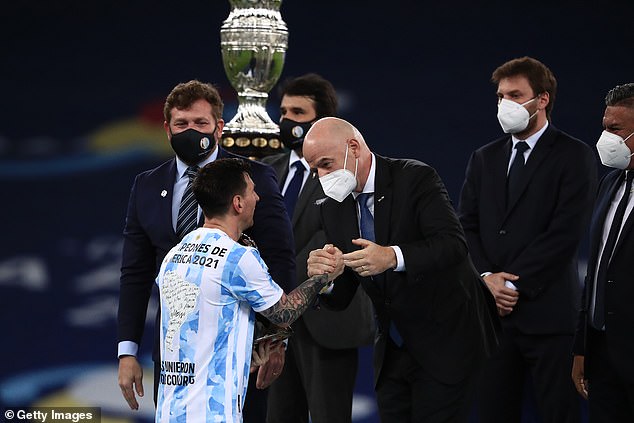 The VIPs visiting for the finals tonight are believed to number in the ‘low thousands’.

The Government has permitted more than 60,000 fans to attend the final three games, providing they have evidence of two vaccine doses or a recent negative test.

The move means the London-stadium, the England team’s national ground, will be at 75 per cent capacity.

Brazil, which remains on the travel ‘red list’, registered 1,205 COVID-19 deaths on Saturday and 48,504 additional cases, according to data released by the nation’s Health Ministry.

The South American country has now registered a total of 532,893 coronavirus deaths and 19,069,003 total confirmed cases.

The VIPs will need to provide a negative test before leaving for the UK, and will have to undergo testing during their stay, according to the reports.

They will also be restricted to staying in selected hotels and to official meetings and matches.

However, according to the Times, most of the VIPs will fly in and out on the same day as the match they are attending.