Home » World News » For we are one and … safe: how Australia surrenders its liberty by tiptoeing around press freedom

For we are one and … safe: how Australia surrenders its liberty by tiptoeing around press freedom

Two years ago this week, federal police knocked on Annika Smethurst’s door with a search warrant. The next day, a posse of feds arrived at the ABC’s Ultimo HQ with another warrant.

The raids on a senior News Corp reporter’s home and on the national broadcaster’s offices created headlines in Australia and around the world. And they forged a temporary alliance between all the big media players. One day in October 2019 the nation’s newspapers carried pages of blacked out, “censored” news to draw attention to Australia’s increasingly secretive and paranoid polity. 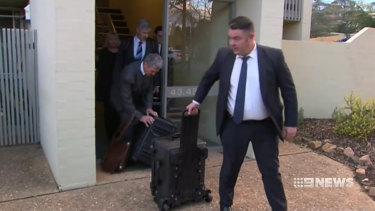 Faced with this outcry, government responded as government does: it commissioned an inquiry. In August 2019, the Joint Parliamentary Committee on Security and Intelligence was asked to inquire into the impact of Australia’s security laws on press freedom.

A full year later, in August 2020, the committee’s report laid out the problem succinctly and forcefully. To quote just one sentence: “… the prevailing argument to this inquiry from non-government stakeholders is that the balance in legislation and culture within the Australian Government has tipped away from transparency and engagement to excessive and unnecessary secrecy.”

Spot on! However, the committee’s proposed solutions fall sadly short. Many stakeholders – not just the media, but lawyers’ groups, academics, human rights NGOs – urged it to recommend a Media Freedom Act, to enshrine in federal legislation what Australia, almost uniquely among comparable democracies, doesn’t have in its constitution or in any kind of bill rights: the fundamental right to press freedom.

The committee squibbed that one.

Stakeholders urged that warrants to search the offices, homes or stored data of journalists and media organisations should be contestable, as they are (for example) in Britain. Media organisations there are informed that a warrant is being applied for, and are able to make representations directly to the judge or other issuing authority.

The committee squibbed that one too.

Instead, it grasped a proposal put forward by the Law Society: that the role of so-called public interest advocates be extended. PIAs were invented in 2015 by the then attorney-general, George Brandis, to ward off media protests over a law that requires telecoms to store our data for two years, so police and intelligence agencies can access it. If they want to search a journalist’s metadata to identify their sources, the law says they first have to get a Journalist Information Warrant; and the granting of that warrant can be contested by a PIA.

But PIAs are a fig-leaf, and a farce. They are lawyers, not journalists; they perform in secret, not in public; they are not permitted to consult the journalist or media organisation whose data is to be searched, so they are reduced to mouthing general platitudes about the public interest in a free press; we don’t know who they are, what warrants they have contested, or how successfully.

This is the furtive regime that the committee recommended, last August, should be extended: PIAs should be able to contest not just Journalist Information Warrants under the Telecommunications Act, but any warrant, under a raft of acts, that is aimed at journalists and media organisations.

Last December, the government agreed to extend the PIAs’ role. So five months later – and two years after the AFP raids – how are we doing? What’s changed?

Answer: nothing at all. Extending the PIAs’ role would mean amending the Crimes Act 1914, the Surveillance Devices Act 2004, the Telecommunications (Interception and Access) Act 1979 and the ASIO Act 1979, just for starters. So I asked the Department of Home Affairs whether any of the required amendments would be presented to Parliament in 2021.

The answer I got, in its entirety, is this: “The Department of Home Affairs is considering the most effective way to implement the recommendations of the Parliamentary Joint Committee on Intelligence and Security on Public Interest Advocates.”

I also asked Home Affairs how many PIAs there are. Answer: two. Not the two former Supreme Court judges whose names the Herald uncovered through the Freedom of Information Act five years ago. Justices Kevin Duggan of South Australia and John Muir of Queensland are no longer PIAs. They’ve been replaced by two other retired judges, also from South Australia and Queensland.

We are not permitted to know their names. Why not? Who knows?

Another recommendation from the parliamentary committee is that the Attorney-General’s Department complete a review of all secrecy legislation by the end of this month, and consider amending the relevant laws to insert a public interest defence for bona fide journalism. How’s that one going? I asked Attorney-General’s. Its response: “The department has completed a survey of Commonwealth secrecy legislation … The survey has identified 11 general secrecy offences, 487 specific secrecy offences and 210 non-disclosure duties.”

But it hasn’t even begun to consult “key stakeholders” about proposals for reform, including the protection of public interest journalism. “Further time may be required due to the complexity of the issues involved.”

Of course it will. After all, this is not a race.

Our forefathers, we are told every Anzac Day, gave their lives for our freedom. But since 9/11 we’ve been asked to give up more and more of it every year, so our lives can be protected. And we’ve agreed.

Australians all, let us rejoice
For we are one and … safe.

Doesn’t have quite the same ring to it, somehow.