30 years ago, Senator Graham Richardson – implicated in the Marshall Islands affair but proclaiming his innocence – resigned his Keating Government portfolio.

For the kingmaker, it’s check, mate! 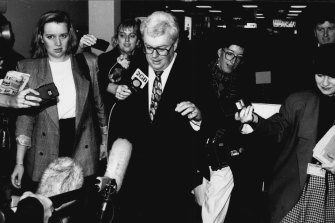 Senator Graham Richardson speaks to the press at Parliament House, Canberra on May 18, 1992Credit:Peter Morris

Still protesting his innocence of any wrongdoing, Senator Graham Richardson yesterday took the chilling jump from mateship to martyrdom, sacrificing his career as a Cabinet minister for the greater good of the Keating Government. That, at any rate, is how he would like it to be seen: a man of respect and influence in the Labor Party brought low by unproven accusations and assumptions of guilt by association through trial by media and hounding by a ruthless Opposition. This, however, is not how everyone else sees it, regardless of the strong cross-factional support he aroused among his Labor colleagues. But in the end, as Senator Richardson well knows, what counted was not so much moral culpability as political vulnerability. To adapt an old Mafia saying, it was nothing personal, just politics.

What put Graham Richardson on the spot was something that came naturally to someone of his background in the tribal faction of Labor’s rough-and-tumble New South Wales Right. He did a favour for a mate, who was also a relative by marriage, by signing a flattering reference under ministerial letterhead and possibly helping him with contacts in furtherance of his business activities in the Marshall Islands. Unfortunately, his cousin-in-law, Mr Gregory Symons, has been found to have a less than impeccable business record. He is being detained in the Marshall Islands on charges alleging a $2 million fraud involving a business migration scheme. Before then, Mr Symons had a record of business failures, culminating in 1989 with his inability to meet debts of $1.5 million. Senator Richardson was never his cousin’s keeper, but the question hanging over him was how much he knew — or should have known or tried to find out — about Mr Symons’ financial affairs before he interceded, directly and indirectly, on his behalf.

In his report to the Prime Minister, Senator Richardson declared his ignorance of pertinent details of Mr Symons’ affairs at the relevant times. Unfortunately for the senator, his credibility had already been tarnished to the extent of his being censured by the Senate for having misled in his explanation. If the Government had control of the Senate, the besieged minister might have been able to tough it out. But neither the Opposition nor key members of the Australian Democrats were inclined to let him off the hook, regardless of what he told the Prime Minister and whether Mr Keating accepted his explanations.

And so Senator Richardson took the proper, and necessary, course of stepping down, sparing himself the possible disgrace of dismissal and his party the continuing damage that his clinging to office would have inflicted on it. It is a heavy blow to his political career (though not necessarily to his influence behind the scenes) and a severe loss to the Government, which can ill afford to lose so accomplished a minister from its front bench. The case, however, is not unique; he himself had insisted that others in high office be stood down for transgressions of propriety or Judgment. Call it justice or call it politics, Richo had to go.