From the Archives: Hundreds of frenzied fans crushed at David Cassidy show 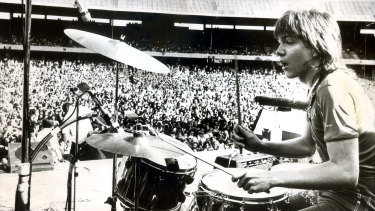 David Cassidy plays before a crowd of 35,000 at the MCG in 1974.Credit:The Age Archives

More than 250 youngsters fainted, 60 were treated for heat exhaustion and dozens received minor cuts and abrasions as the 35,000 strong crowd surged towards the stage.

Four people – a girl with a broken arm, others with eye and head injuries – were taken to hospital. They were released last night.

The officer in charge of the 80-man police contingent at the show (Commander J. O’Connor) said he was “disgusted” by the crowd control arrangements.

Commander O’Connor said later he would veto any future pop concerts unless there were better crowd control procedures.

He said the concert organisers, Harry M. Miller and Moomba, should have built steel barriers across the ground to break up the crowd.

“The Health Department agreed to these facilities but we would not have done so,” Commander O’Connor said.

“Some of these children could have been crushed to death.”

Superintendent M. D. Phelan, of the St. John Ambulance Brigade, said last night: “If those kids had surged forward at once they could have pushed the stage over.”

He said police would be given a report this week criticising the design of scaffolding erected to hold the amplifiers at yesterday’s concert.

Superintendent Phelan said the 25-foot high structures could have collapsed under pressure from the crowd.

It was sheer mayhem as Cassidy ran on to the stage at yesterday’s Moomba concert. Girls aged eight and nine were crushed against barricades and some were led screaming from the crowd.

Commander O’Connor threatened to stop the concert unless the crowd stopped pushing forward.

Cassidy told his screaming fans: “I love you but I want you to do me a favour. Just push back so no one gets hurt. If you don’t I’ll have to go off.”

Concert organiser, Harry M. Miller, said later: “The agony is so very real for a teenager. They can get so close to someone they really love, but we won’t let them get any closer.”

At the end of the 140-minute concert, Cassidy’s bodyguards threw the singer into a car behind the stage and drove him to the MCC members’ enclosure where a limousine was waiting to take him to his hotel.

But the car skidded on the MCG turf and smashed into the white iron fence. Cassidy was unhurt.