Home » World News » From Thornbury to the world: Actors revel in new online gig for kids

From Thornbury to the world: Actors revel in new online gig for kids

What do you get up to during your work day? As online children’s entertainers, it’s one Melbourne couple’s daily duty to wear tutus, sing songs about germs and play talking teddy bears.

Lauren Jimmieson Craig and her husband Anthony Craig reckon the more over-the-top and silly they make their characters, the better. 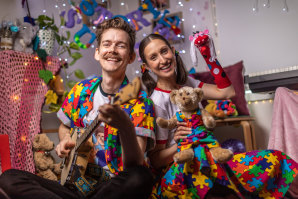 They once took days to film a segment about the fable The Tortoise and the Hare — mainly due to Craig’s depiction of the tortoise as a wizened old man. “We couldn’t stop laughing,” Jimmieson Craig said.

It’s been a fun but unexpected new career for the couple, who started their online company, Story Surprise in April 2020, after their roles in stage musicals vanished due to the COVID-19 pandemic.

Jimmieson Craig had starred in Singin’ in the Rain and Sweeney Todd and toured 10 countries playing Rocky in Paw Patrol.

Craig played Shaggy in Scooby Doo and had been cast in Into the Woods.

Lately, their world has both shrunk and expanded. They work up to 12 hours a day on Story Surprise from their Thornbury apartment, writing and filming YouTube videos, podcasts and live Zoom sessions.

Their segments, using their own props, set design, editing and composing, often include a song, craft making and acting-out either a folk story or an Australian story.

Among the latter has been My Shadow is Pink by Scott Stuart, about a boy whose father dislikes him wearing a tutu, and Samson C. Turtle and the Deep Breath by Clare Flory, about managing anxiety.

One boy ignored that day’s superhero theme, and held up to the camera a Lego fire truck he’d made, calling out until the hosts applauded him. Other kids have held up a baby sister, or their cat.

Kids can be harsh critics, if a joke falls flat. “They’ll walk away, fall asleep or call out, ‘I’m bored,’ Jimmieson Craig said.

The couple have posted a podcast Fun at Home – soon to be a video, too – about creating stories from existing objects in your house such as making puppets out of socks.

It was inspired by hearing how the grandchildren of children’s author Hazel Edwards had enjoyed Story Surprise episodes while in quarantine in the Northern Territory.

Another parent wrote that the Story Surprise videos and podcasts were keeping their kids entertained while serving a 14-day home quarantine for visiting a COVID-19 tier-1 exposure site.

“It’s hard for a little kid to understand why they’re not allowed to go outside, so the parents have come to us for a bit of help,” Jimmieson Craig said.

Jimmieson Craig and Craig are proud of Story Surprise. “We’ve worked harder than we ever have before, but it’s been so worth it,” Craig said.

In between lockdowns, in May, the couple performed six live stage shows, based on their video content.

They are keen to pursue that in future. “We have the sets, costumes and music — everything is there ready to go,” Jimmieson Craig said. “We just need the opportunity to come around again and we’ll be out there.”

In need of some good news? The Greater Good newsletter delivers stories to your inbox to brighten your outlook. Sign up here.