Why was Churchill-bashing historian who ‘desperately’ wanted to join BLM mob allowed to influence Colston jury? Anger grows over ‘political’ case that put 17th century slave trader on trial and NOT statue-toppling vandals

Experts have slammed the decision to allow a TV historian who openly sympathised with Black Lives Matter protestors to provide expert testimony as fears grow that the 17th century slaver Edward Colston was put on trial rather than four self-professed vandals.

Presenter David Olusoga had previously said he ‘desperately’ wanted to join the Bristol protests that saw a bronze memorial to Edward Colston thrown into the city harbour in June 2020.

He later told the Radio Times that he followed the crowds on social media as they moved closer to the statue, and had to fight urges to cycle down and join them.

Despite these remarks, and objections from the prosecution, the 52-year-old – who has previously shared stinging criticism of former PM Winston Churchill – was still invited to speak for two hours as an expert witness for the defence in the ‘Colston Four’ trial.

Ministers are set to press ahead with sweeping changes to legislation following the jury’s decision to clear protestors Rhian Graham, 30, Milo Ponsford, 26, Sage Willoughby, 22, and Jake Skuse, 33, of all criminal damage charges.

Lawyers and political commentators have since slammed the jury’s verdict, with some admitting they fear that the 17th century slaver was put on trial at Bristol Crown Court, rather than the four vandals. 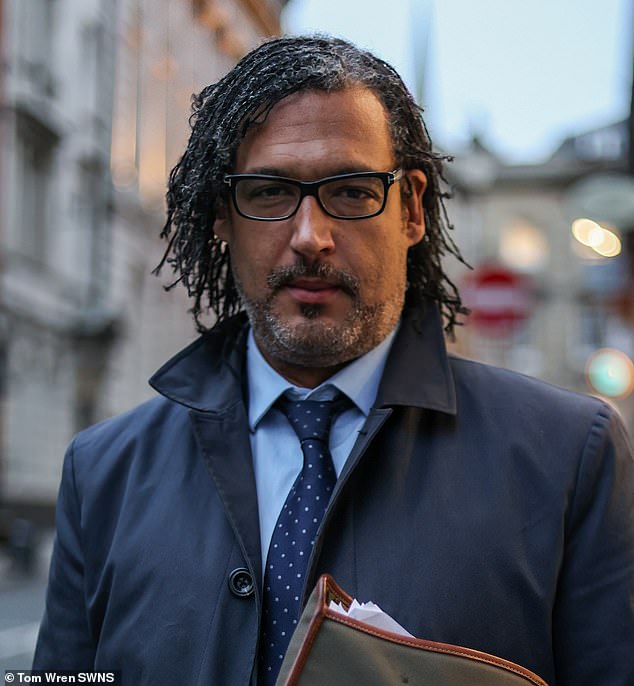 Presenter and historian David Olusoga (pictured) had previously said he ‘desperately’ wanted to join the Bristol protests that saw a bronze memorial to Edward Colston thrown into the city harbour in June 2020. Mr Olusoga is pictured outside Bristol Crown Court on December 16 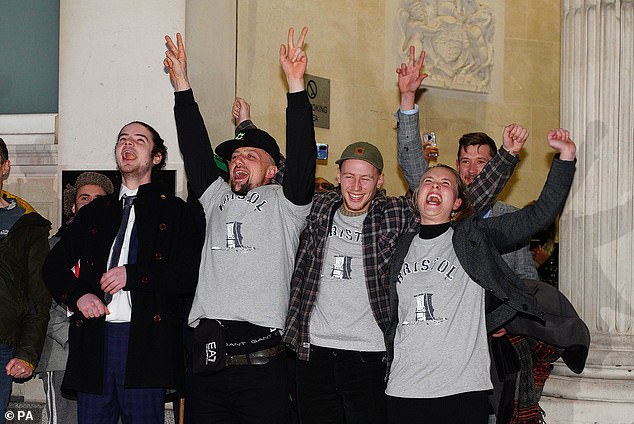 The bronze memorial to the 17th century merchant Edward Colston was pulled down on June 7 last year during a Black Lives Matter protest, and was later dumped in the harbour (pictured) 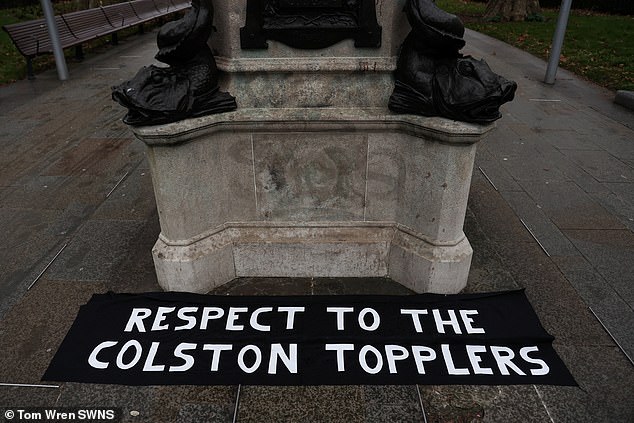 Judge Peter Blair QC allowed Mr Olusoga to provide evidence despite the prosecution pointing out a potential conflict of interest due to the presenter’s past comments that he ‘desperately’ wanted to join Black Lives Matter protestors.

Political commentator and campaigner Calvin Robinson said he sceptical of the defence’s decision to bring ‘biased’ Olusoga as an expert witness.

He told MailOnline: ‘David Olusoga was obviously biased, but more importantly he’s not an expert in destruction of property, he is a historian.

‘This court case should have had nothing to do with history. It was about the destruction of public property.

‘Clearly it was Colston on trial, and not the Black Lives Matter thugs. The whole trial was on Colston – it wasn’t entirely relevant and now the result looks political.’

Mr Olusoga, who provided expert testimony for the defence at Bristol Crown Court despite concerns being raised by the prosecution, welcomed the jury’s verdict.

He told Good Morning Britain on Thursday: ‘That statue standing there for 125 years was validating the career of a mass murderer.

‘And to people whose ancestors were enslaved by Colston and men like him, it is offensive, and you can talk to thousands of people in Bristol who found it offensive.

‘I think what this verdict shows is that when people are given the evidence about Edward Colston, about Britain’s involvement in slavery, and about the rather strange story about the cult that was built in Bristol in the 19th century around Edward Colston, when they get that information directly rather than through tabloids or journalists or politicians, then they actually react to the evidence rather than to the culture war drum beat that is built around it.

‘Most people don’t understand the details of this history, of this statue, and the long campaign to have it removed peacefully.’ 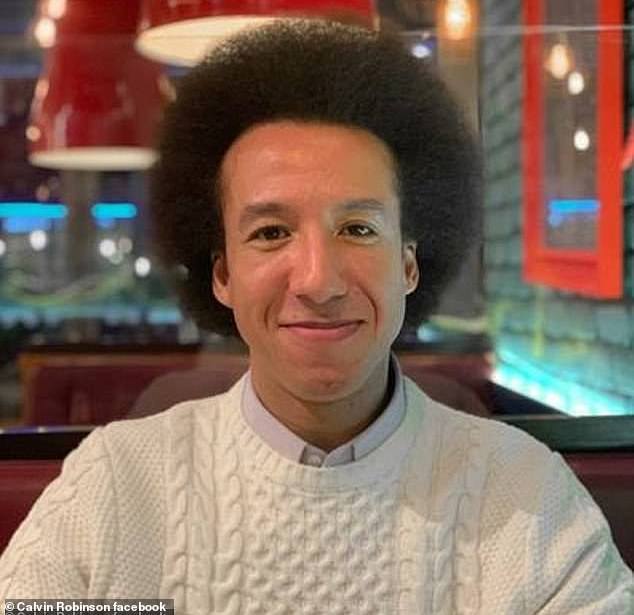 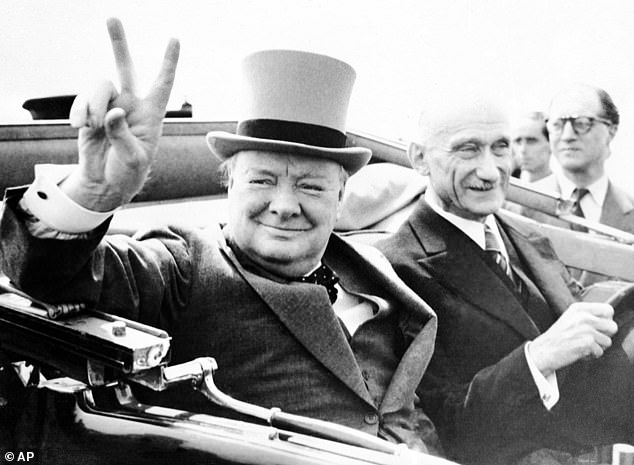 Mr Olusoga joined fellow defence witnesses Cleo lake, a former Lord Mayor of Bristol, and Lloyd Russell, 65, who both spoke about racism in the city.

Ms Lake, now a Green Party politician who had previously tried to remove symbols of Colston in the city, spoke in favour of the defendants who were on trial.

She told the court that she was ‘shocked, alarmed and startled’ to discover a portrait of the slave trader in the Lord Mayor’s parlour, and tried to have it removed.

Once a student at Colston Girls’ School in the city, she remembered protests in the mid 1990s from members of Bristol’s Afro-Caribbean community calling for the 17th century bronze memorial to be removed.

Cleo Lake, former Lord Mayor of Bristol who had previously tried to remove symbols of Edward Colston in the city, spoke for the defendants who were on trial.

While being quizzed by the defence, the Green Party politician admitted she celebrated the toppling of Colston’s statue on June 7.

She told the court that she was ‘shocked, alarmed and startled’ to discover a portrait of the slave trader in the Lord Mayor’s parlour, and tried to have it removed. 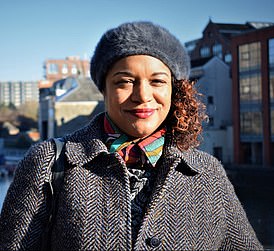 Once a student at Colston Girls’ School in the city, she remembered protests in the mid 1990s from members of Bristol’s Afro-Caribbean community calling for the 17th century bronze memorial to be removed.

Ms Lake told the court she celebrated the toppling of Colston’s statue on June 7, feeling a ‘great sense of relief’ when she watched it fall into the harbour.

Ms Lake told the court she celebrated the toppling of Colston’s statue on June 7, feeling a ‘great sense of relief’ when she watched it fall into the harbour.

Other witnesses called to trial included charity worker Lloyd Russell, 65, who said his family arrived in Bristol from Jamaica in the 1950s.

He compared living in the diverse community of St Paul to the ‘Bronx of New York’, and explained he attended a mostly white grammar school in Montpelier, where he first faced racism aged 11.

‘At the time I just didn’t want to be at school’, he told Bristol Crown Court. ‘My mum told me how when they came to Bristol there were vigilante white people chucking things through the windows.

‘My father was a proud black man who didn’t heed the warning. He took my mum into Broadmead and they spat in her face.’

Mr Olusoga has previously been highly critical of former Prime Minister Winston Churchill – accusing him of being involved in activities in Africa that would today be considered war crimes.

While accepting the former PM was a ‘national hero’, Olusoga said in 2018: ‘While I’m personally glad that Churchill overcame Halifax in early 1940 and it was Churchill who faced the Nazis that year and the years that followed, that doesn’t mean that he wasn’t somebody that wasn’t responsible, or largely responsible, for the Bengal famine [of 1943-44].

Reacting to the verdict, William Hughes QC, of the prosecution, told MailOnline: ‘Ultimately it was a disappointing result.

‘In terms of David Olusoga, we [the prosecution] did not dispute the back story of Colston.

‘We accept he was a slaver, he was involved in the Royal African Company. In our view, Olusoga’s testimony didn’t add anything.

‘Rather, it was a gloss that I can imagine would have put anyone in the jury at a degree of unease.

‘The judge had a discretion to deal with matters that were relevant or not. We said it wasn’t, but he took the view that it was important the jury heard it. We have to respect that.

‘Although it wasn’t a unanimous decision by the jury, and it is an unusual case, it demonstrates the jury can think about matters of importance in this day and age, relating back to matters 300/400 years ago.

‘Whether I agree or not, it’s a vindication of the jury mode of trial in the UK.