‘Did the dads pay for this show?’ Fury after pupils as young as seven are welcomed back from holiday with a belly-dancer routine at Russian school

Parents and pupils were left open mouthed after a teacher performed a belly dance at a back to school ceremony in Russia.

Today, pupils across the country are returning to school after the summer break, marking the occasion – known as Knowledge Day – with dance and musical performances.

But one such performance, at school Number 76 in the southeastern city of Khabarovsk, raised a few eyebrows when a female teacher, dressed in a bra and long skirt with a slit up the side, performed a belly dance.

Local education chiefs were reportedly ‘outraged’ by the routine, which took place in front of children as young as seven.

‘The education department noted that such a performance is unacceptable and inappropriate in front of children,’ a local media report stated.

‘They questioned the entire educational work of the school.’

The school’s leader would be ‘held responsible for the actions of the young teacher,’ the report continued, adding that ‘a series of official checks awaits the school.’ 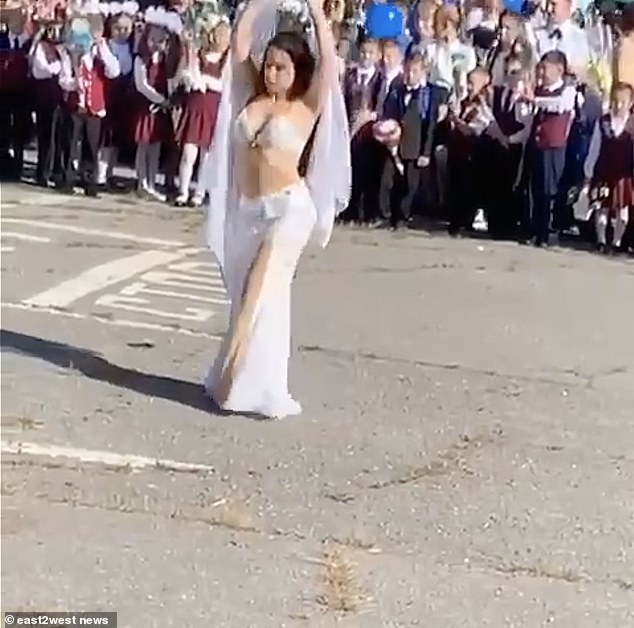 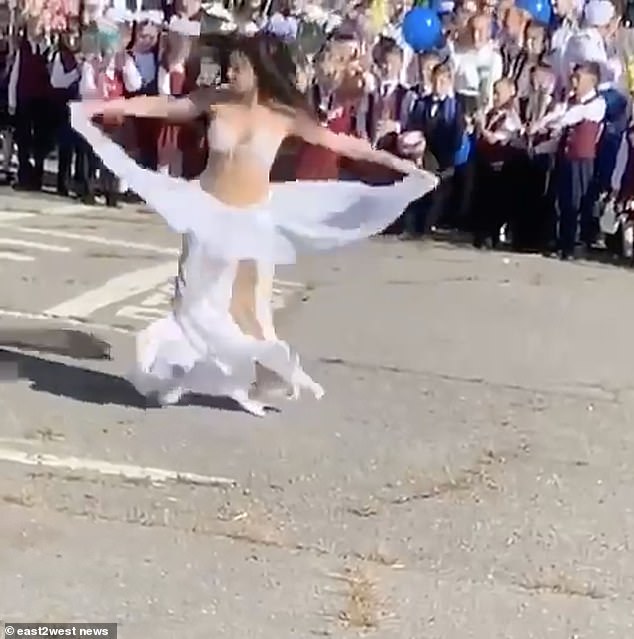 Local education chiefs were reportedly ‘outraged’ by the routine, which took place in front of children as young as seven during celebrations of Knowledge Day, which marks children’s return to school after the summer break

Some critics deemed the performance ‘inappropriate’, with one asking: ‘Did the Dads put all their pocket money together to pay for this show?’

Others compared the belly dance to ‘an act from a local striptease club’.

Tatyana Butskaya, head of the Moscow-based Council of Mothers, slammed a video of the performance, saying that the focus should have been on the schoolchildren.

‘Today is for schoolchildren – Knowledge Day – associated with school uniforms and bouquets of flowers from pupils for teachers – not extravagant behaviour,’ her spokeswoman said.

‘The younger pupils didn’t understand a thing. The older ones must have been truly embarrassed.’

Another critic who disapproved of the performance lamented that ‘people are losing every idea of what is decent and appropriate these days.’

For some parents, however, the dance was a welcome break from the usual routine. 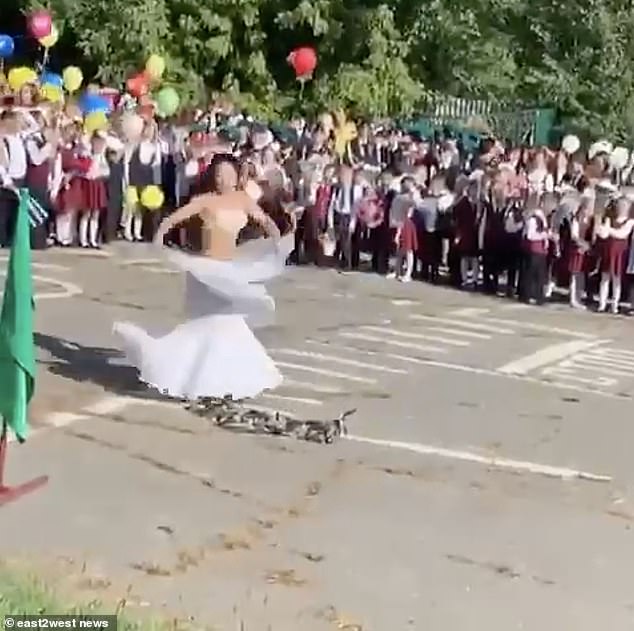 Some critics deemed the performance ‘inappropriate’, with one asking: ‘Did the Dads put all their pocket money together to pay for this show?’

‘Why are some [people] so upset?,’ one parent asked, adding: ‘It’s much better to have a festive performance than a military parade.’

‘Everyone liked it,’ one mother said.

‘There was not a single word of bad or negative reaction. Everyone was delighted, the dancer was praised.

‘It wasn’t some tacky entertainment. It was a dance symbolising a bird, a message of never giving up for the kids,’ the mother said.

The school has not commented on the performance and the identity of the teacher has not been reported.

While not traditionally part of Russian culture, belly dancing has become popular in the country since foreign influences began to flood in following the collapse of the Soviet Union.

Such is its popularity in Russia that dancers there have even created a new style of the traditionally Middle Eastern performance.

Known as Russian Oriental Belly Dance, it combines elements of Turkish and modern Egyptian styles of belly dance with a strong balletic influence.