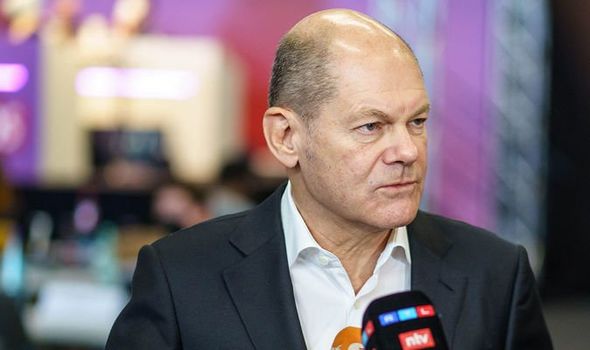 Social Democrat Olaf Scholz is known to want to continue the so-called “Ostpolitik” approach to Russia – epitomised by his SDP party and predecessor Angela Merkel – which places engagement and economic interest above national security interest.

But his coalition partners, the Green Party and Free Democrats (FDP) have already expressed the need for a more robust approach on Russia.

“Russia’s intelligence services were having a field day, conducting wet jobs in Berlin within walking distance of the Chancellery, liquidating a Georgian national and mounting cyber attacks on the Bundestag, and there was no strong political response to that.”

While Scholz will want to continue to direct foreign stance, as Merkel did, he may be forced to be guided by his new foreign minister, a brief given yesterday to Greens co-leader Annalena Baerbock.

Both the Greens and FDP have been critical over Putin’s treatment of Russian opposition leader Alexei Navalny, poisoned with Novichok and who is now languishing in prison.

“Baerbock, has spoken clearly on Russia, Nordstream 2 and the treatment of Navalny, which really shook up the political landscape. The FDP was critical, too,’ she said, adding that the SDP had been forced already to make minor concessions over higher defence spending.

“To my mind, either Russia is going to get to hear another tone from this government, or this coalition won’t last,“ said Vogel, who was formally based at the Nato office in Moscow.

A more robust German policy will put paid to attempts by Russian premier Vladimir Putin to forge a “new deal” with Germany and the US.

Putin’s involvement in the Belarusian migrant crisis – which has seen thousands of migrants weaponised as they  were ushered through the EU’s border into Poland – and his amassing of troops around Ukraine are widely viewed as attempts to leverage concessions.

“Putin will find that any hope of leveraging a new deal won’t work,” said Vogel.

‘Apart from Germany he has miscalculated on Biden, who he was counting on to gradually retract from Ukraine. The opposite is true.

What is happening where you live? Find out by adding your postcode or visit InYourArea

“And he has completely disregarded the UK factor – the British won’t take it, and the UK is still in Nato. “

Last week defence secretary Ben Wallace revealed a partial reversal of the mass pull out of British troops from Germany announced in the 2010 defence review.

A brigade-size force of 250 troops and hundreds of tanks and drones will be based at the forward holding base in Sennelager.

It will become one of three new land regional hubs, along with sites in Kenya and Oman, which Lieutenant General Ralph Wooddisse, commander field army, said would enable the army to “spread more rapidly” and “be ready to deploy from those should it be required”.